For non-Ontarians, the idea of an LCBO may seem a little bit strange. The acronym stands for Liquor Control Board of Ontario, which is a provincially-owned retail store that sells beer, wine and spirits — and, importantly, it’s the only place where you can buy all three. The Beer Store carries beer (obviously), and a few places like the Wine Rack carry wine, and as of April 13th the Government of Ontario announced that beer will be allowed to be sold in some grocery stores… But you can’t get spirits anywhere else.

All that being said, the LCBO has gone to great lengths to follow a retail business model instead of a government one. The stores are well-kept, even fancy in some places. If a small location doesn’t carry the drink you’re looking for, you can order it online and have it shipped to your home for a fee or to your closest branch for free with a minimum purchase. Like many retail stores, they also have their own free in-house magazine: Food & Drink. These magazines (and now their website) have a great reputation for delicious recipes — and of course suggestions for the proper drinks to serve with said recipes. The magazines are stuffed with full-page glossy photographs of mouth-watering concoctions. Let’s be honest here, it’s food porn, plain and simple. 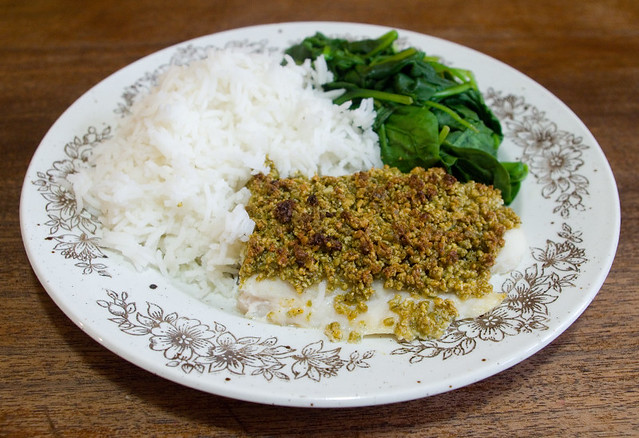 I have been collecting Food & Drink magazines for years, but I never actually used any of their recipes. I’d ogle the photos for a bit, and then the magazine would go up on a shelf, never to be looked at again. Two years ago I just recycled the lot of them, tired of them taking up space on my bookshelf to no purpose. But the next time I went to the LCBO, I picked up the latest edition anyway.

So it’s with a great feeling of achievement that I can now say that I’ve actually made one of the Food & Drink recipes! I grabbed a copy of the magazine last week and actually cooked the food on the cover of the Early Summer 2017 edition within days. I used the Pumpkin-Seed & Chili-Crusted Fish Fillets with Avocado Tartar Sauce recipe. Of course, my version didn’t turn out nearly as pretty, but I just snapped a shot of it before we sat down to eat. But it was delicious! Pretty easy, too. I used the cheap basa fillets that I had in the freezer, which were much thinner than the recipe called for. I stacked one fillet on top of another and then crusted the stack, and that worked pretty well. I omitted the jalapeno peppers from the avocado tartar sauce because of my kids’ low tolerance for spicy foods; it was still delicious and everyone came back for seconds.

After this success, I’m thinking that I’ll browse Food & Drink next time I’m at a loss for dinner inspiration. Maybe eventually I’ll even do a second dish from there!