Canning season is in full swing, with my garden producing enough ripe tomatoes for a good-sized batch of something every couple of days, and fruits and vegetables at the cheapest they’ve been all year at the farmer’s market and supermarket. Although most days are still quite warm, it cools down quite a bit after dark, so I’ve been taking advantage of the lowered temperatures to get some canning done in the evenings after the kids go to bed. Sometimes this doesn’t work out so well when a recipe unexpectedly refuses to thicken up and I end up getting to bed around two o’clock in the morning, but I’d take a late night over canning in the heat any day. 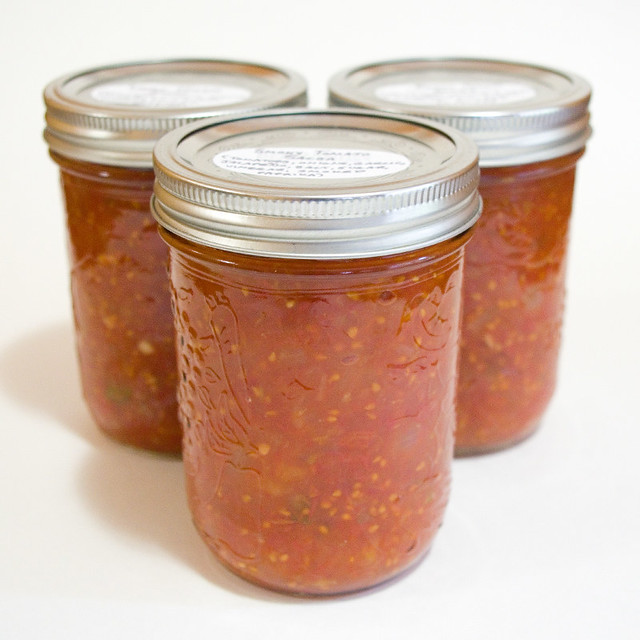 Mild tomato salsa, all ingredients from my garden except the onions.

In addition to trying to preserve family recipes, another reason I started this blog was to keep track of recipes I’d tried, which ones I liked, and any changes I’d make in the future. Last year I didn’t write any of this stuff down, and when it came to canning season again I had the hardest time remembering what recipes I used. Sure, some of them are quite distinct, but did I get them online? Did I find them in any of my copious number of cookbooks?

The salsa above is a case in point. I mean, salsa is extremely popular and easy to make. Every canning book has at least one salsa recipe. So I figured that this year what I’d do is make a small batch from each of the recipes that interested me, and pick the one I liked best for next year. The photo above is Smoky Tomato Salsa, from page 255 of Put ‘Em Up! Fruit (Sherri Brooks Vinton, 2013). This was a pretty decent salsa, although it didn’t turn out as smoky as the writeup suggested. Perhaps I will try chipotle powder instead of smoked Spanish paprika next time. Additionally, the recipe was really, really watery, and I had to boil it down for quite some time to get my preferred consistency. This was totally my fault because I used whole cherry tomatoes instead of peeled, seeded and diced tomatoes as specified in the recipe. Last year I peeled all of those tiny tomatoes and it was so tedious that I decided never again. Because I had to boil it down, this concentrated the vinegar and the sugar a little too much for my liking. I think that next time if I use cherry tomatoes I will just elimiate the sugar altogether (cherry tomatoes are much sweeter than regular-sized ones anyway). I would also cut down the vinegar to half a cup (8 Tbsp). The yield of this recipe was three to four 500mL jars of salsa, which should still make the mixture acidic enough to be safe for hot-water canning. (Lemon juice and vinegar have a similar PH, and Pat Crocker’s Preserving recommends adding 1 Tbsp bottled lemon juice to a 500mL jar, and even halving the vinegar makes it 2+ Tbsp per jar.) 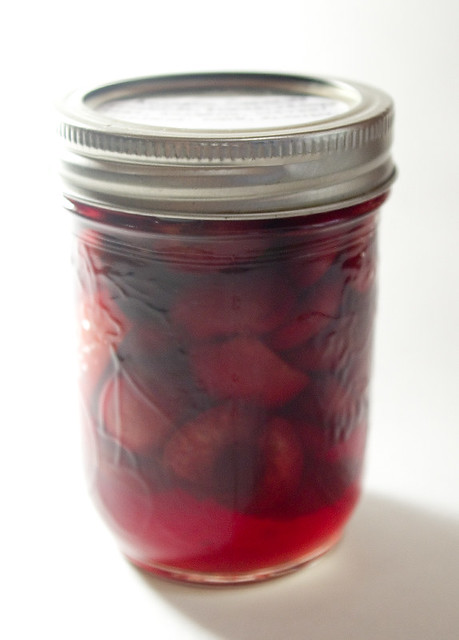 Another recipe that I tried this year is Amaretto Black Cherries from page 126 of Preserving: The Canning and Freezing Guide for All Seasons (Pat Crocker, 2011). I overfilled a few of the jars and had to remove some of the syrup-coated cherries before sealing, and I was very impressed by the flavour. I can only imagine what they’ll taste like after soaking in the syrup for a couple of months. They’re like a tipsy maraschino cherry. When I was a kid and we bought cheap fruit salad preserved in syrup, I would always save the cherries for last because they were my favourite part. In addition to eating these cherries straight out of the jar or as a dessert topping, Preserving also includes a recipe for Amaretto Clafoutis with burnt Almonds on page 128. I will definitely have to try making this dish once the cold weather hits.