I absolutely love Atlas Obscura. Not only do they write all about the kinds of weird things that I find interesting, but on a more practical level they help me to find the less-touristy interesting things when I’m travelling. I find when I’m in a new city it can be a bit overwhelming, what with trying to find my way around and looking at all the people and in all of the shop windows. Doing a bit of pre-planning with a traditional guidebook (I’m partial to the Lonely Planet ones) and Atlas Obscura helps keep me from walking by interesting things just because I had my head turned the wrong way at the wrong instant. It kind of turns my trip into a treasure hunt. 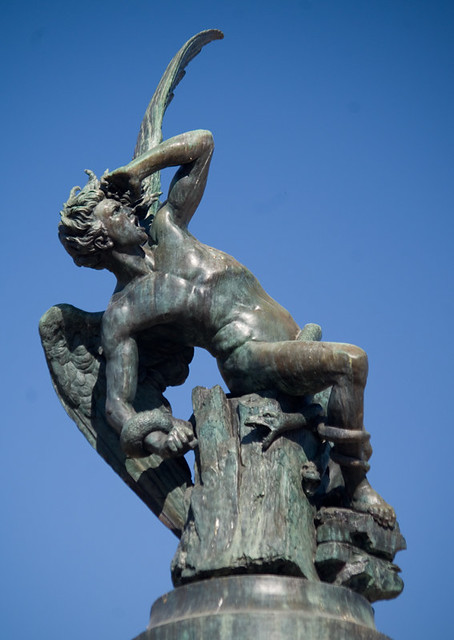 For example, the Fountain of the Fallen Angel (Ángel Caído) in the gorgeous Parque del Buen Retiro is pretty famous for being the only known public monument to the devil. This sculpture was in both guides and was part of the suggested walking tour in the Lonely Planet book… 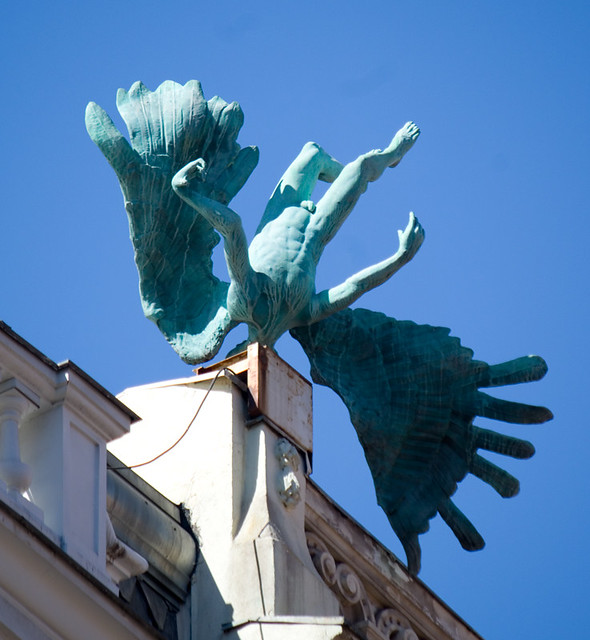 But Air Crash near Plaza Mayor, which depicts an angel in the middle of plowing into a building, is about four stories up on a rather narrow street, and is easily missed. 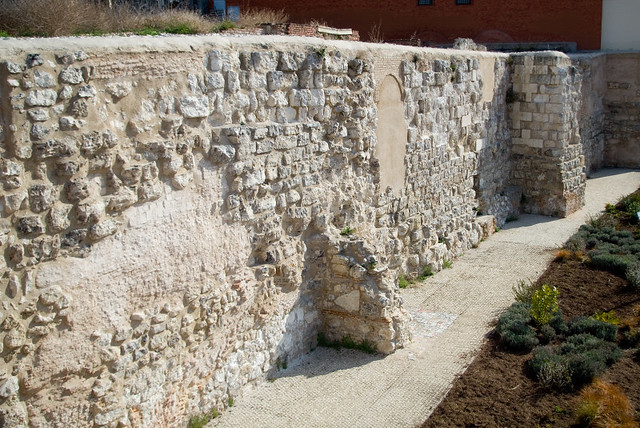 I would probably have found the Muslim walls of Madrid, the last remnants of the pre-Christian city walls, with my traditional guide, since they were also part of a suggested walking tour… 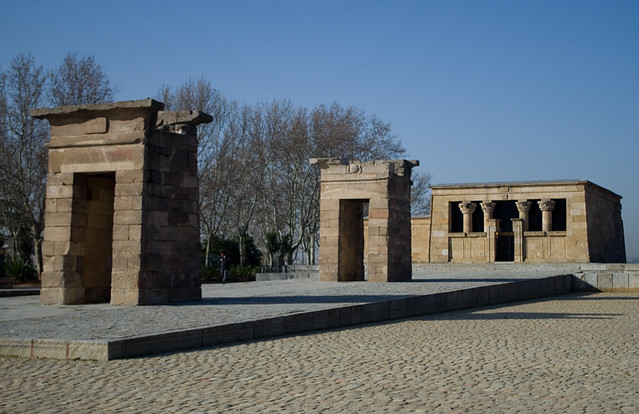 And the Temple of Debod, an ancient Egyptian temple gifted to Spain from its home country, is both quite close to the palace and is in a major park that has stunning views of the city… 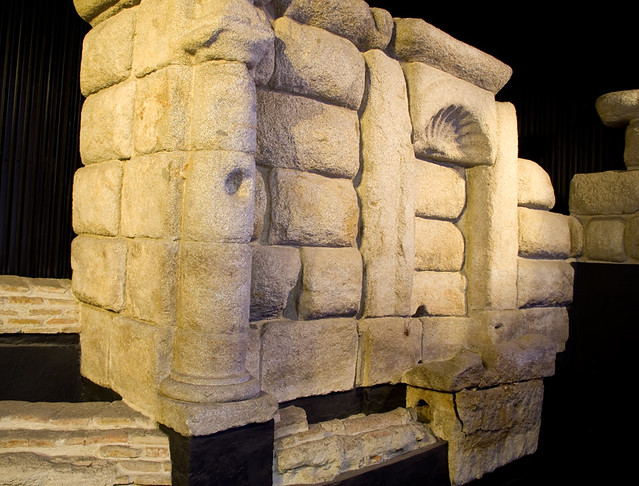 But I don’t think I would have found the tiny Caños del Peral Archaeological Museum located inside the Opera Metro station without help — although I might have passed by it on the way out of the subway, if I’d come out at that station for other reasons (it’s the closest station to the palace). 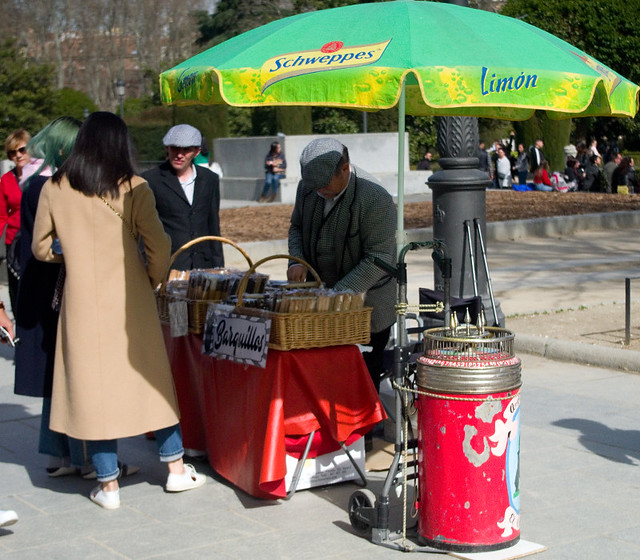 With all of the other vendors hanging around the outside of the palace trying to get a piece of the tourist pie, I almost walked by this barquilleros vendor, except that his tiny roulette wheel caught my eye. (You can play the game of chance in hopes of getting more waffles for your money.) 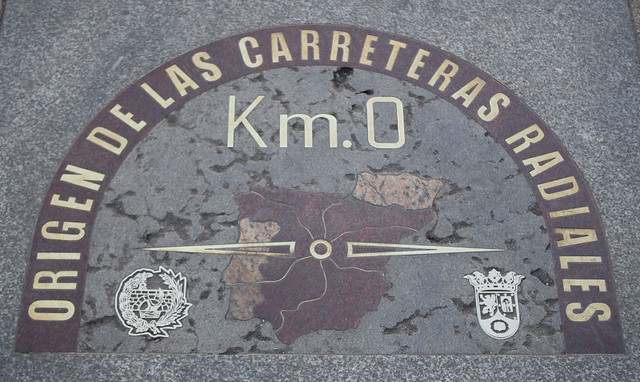 I had a really hard time finding the Kilometre Zero marking, from which all roads in Spain are measured, because it really is just one paving stone among many and people were literally standing on it. 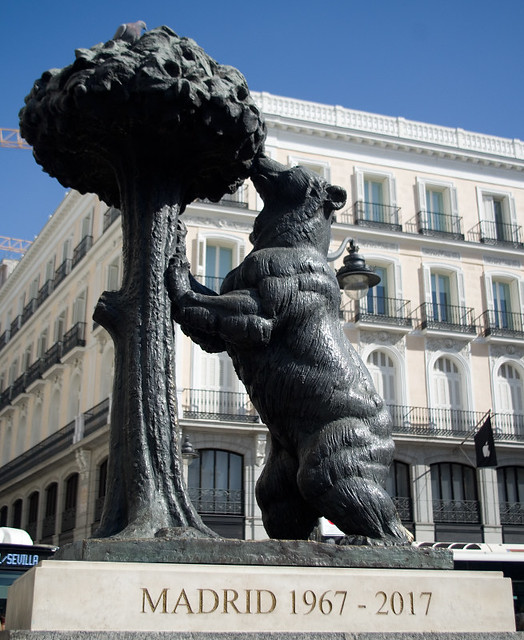 I had a much easier time finding the Bear and the Strawberry Tree (El Oso y el Madroño), even though it was just across the Puerta del Sol square, because I think every tourist and their dog was having their picture taken in front of it. (This bear is the symbol of Madrid and the motif can be found all over the place, including on manhole covers.) 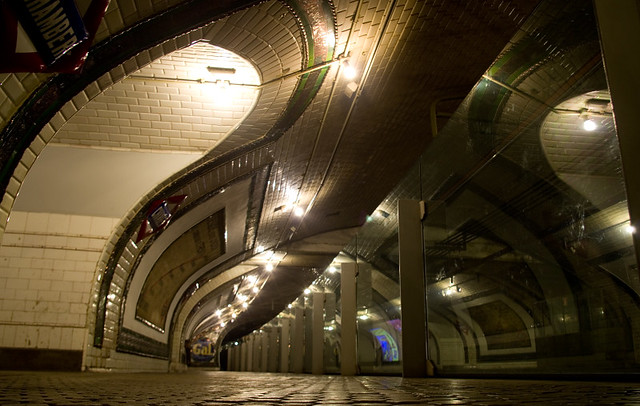 I greatly enjoyed the free tour of the Chamberí Ghost Station, which is a subway station that was closed in 1966 that has now been restored and reopened as a museum. 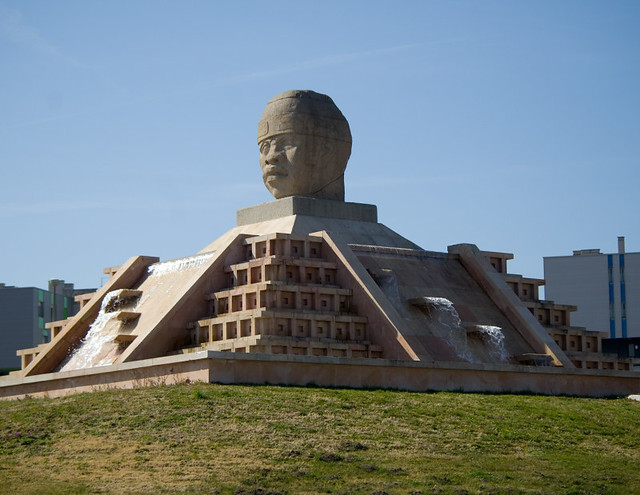 When we were chatting with our Spanish hosts about where we’d visited, it came up that we’d made a special trip off of the beaten tourist path to check out the Olmec head roundabout. This exact replica of an Olmec head was donated by Mexico in 2007, but its ignominious placement in the middle of a traffic circle at the edge of a housing development means that even most city natives haven’t heard of it. 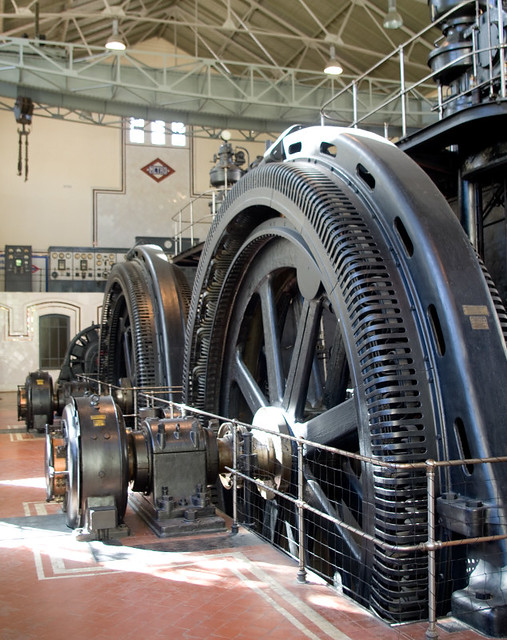 One place that we visited upon the suggestion of our Lonely Planet guidebook that wasn’t on Atlas Obscura, but I think it should be, was the Pacífico Power Plant. This station powered the metro from the 1920’s to the 1950’s, and also provided power for the city during the Spanish Civil War. It was closed completely in the 1970’s and was restored in 2008 to be turned into a museum. The massive diesel generators are similar to ship’s engines of the era.

Unfortunately I didn’t get to every single Atlas Obscura listing for Madrid, but I think I hit most of the ones I was interested in. There were a couple of museums that appealed to my scientific curiosity and sense of the macabre, but the weather was so sunny and beautiful for my entire trip that I didn’t really have a huge impetus to stay indoors. Especially since I knew how soon I’d be returning to snowy Canada in February!