I originally posted about my Minecraft Creeper Blanket on my old blog back in 2013. I written anything new for that blog for years, and I just assumed nobody had looked at it in equally as long. As it turns out, someone had been trying to follow the pattern I’d posted — and then I took it down! So I am re-posting my old entry. I plan on doing this with more of my old work, subject to requests, so if there’s an old post you’d like to see, just ask. 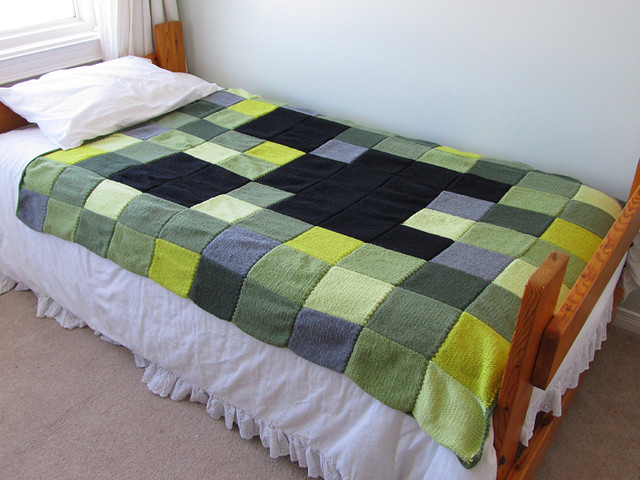 On July 16th, 2012, I almost lost my little brother to a house fire. The fire started in the room where he was trying to sleep away a flu, and he was lucky to get out alive and relatvely unhurt; he suffered some mild burns and smoke inhalaton. My parents, of course, threw a couple of things in a suitcase and started the drive to Halifax to take care of my brother in the hospital (he was there for almost a week) and then help him once he was out. With two young children at home, I couldn’t manage a 16-hour drive and indefinite hotel stay on practially no notice, but it didn’t mean that I didn’t want to be there. He’s my baby brother, man. I couldn’t just sit on my hands and do nothing. As it became more and more obvious that, between the fire damage and the water damage from puttng the fire out, my brother had lost just about everything, I started to wonder if there was anything I could make for him. Sure, the insurance should pay to replace most of the essentials, but what about those personal touches? That’s where the idea for this blanket was born. 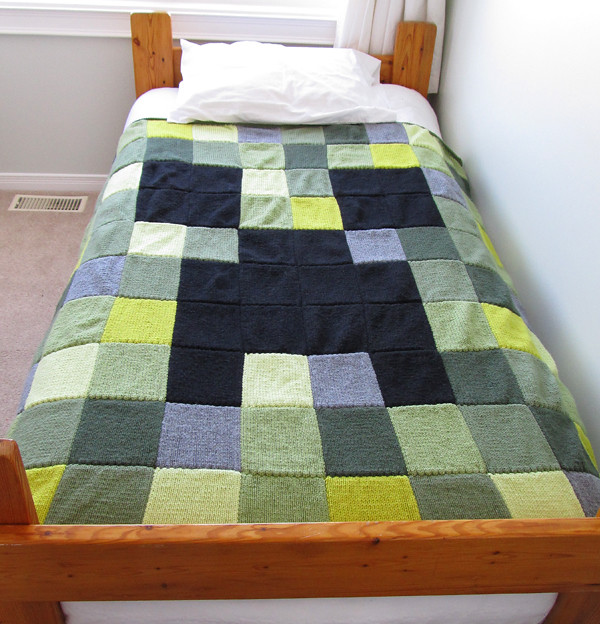 For those not into such things, the blanket pattern is based on the face of a Creeper, which is a bad guy in the game Minecraft. I chose the design simply because I know that my brother loves the game. Perhaps I should have played the game before I knit the blanket, because I found out that the whole point of this villain isn’t so much that it kills your character (there is minimal penalty in this game for dying), but that it destroys the creations that you’ve spent a long time building. You know, like a house. I swear I didn’t know this before I knit the blanket. This doesn’t seem to bother my brother much, or maybe he takes it as ironic. At least I hope so…

This is what a Creeper looks like in game: 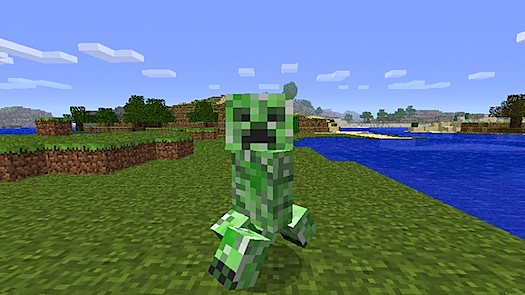 It took me six months of knitting to finish the blanket. At first I thought it would be ready for my brother’s birthday, then Christmas… In the end, it was a delayed Christmas present that I gave him in February. I swear I tried to make the Christmas deadline, but I still had at least 25 squares to go by the time December 25th rolled around. I mean, it took me almost a month to sew all 100 squares together. I now have a HUGE respect for anyone who undertakes this kind of project on a regular basis. My hat is off to you, sir or madam. 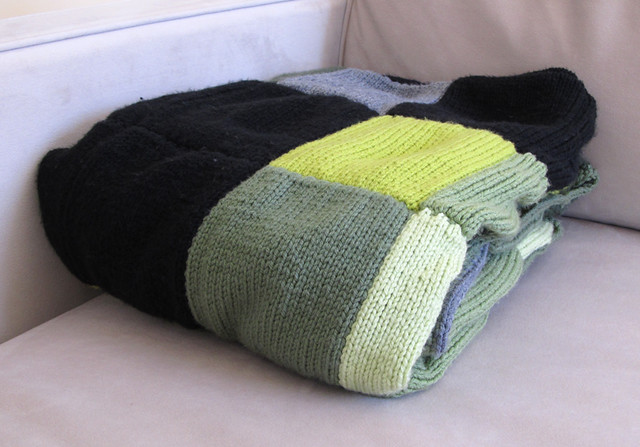 It’s amazing how all that work folds up into such a small package.

Here is the pattern that I designed if you’d like to try to knit the blanket yourself. I knit it as simple stockinette stitch squares, cast on 25 stitches and knit until they were square. This makes a blanket that is big enough to generously cover a single bed, or barely cover a double. I’d give you exact dimensions, but the blanket is already with my brother in Halifax. I tried to find an acrylic yarn (brother has pets, it has to be easily washable) with as many shades of green as possible to make the Creeper appear authentic. This is the best selection I could find. 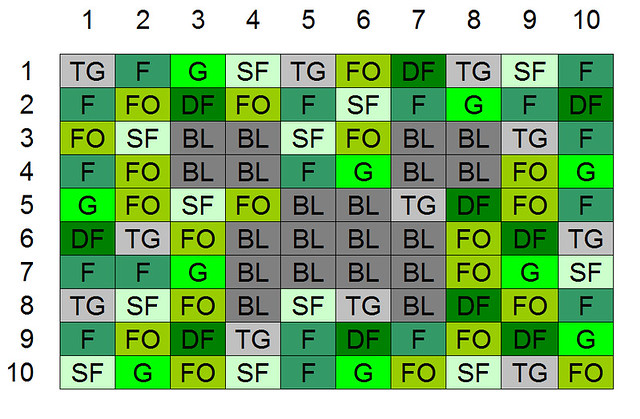 The legend as follows: 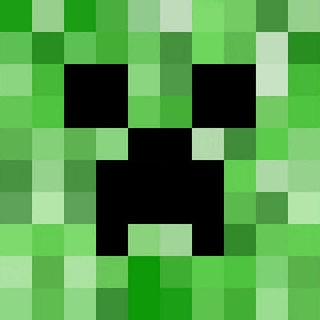 If you try this pattern yourself or if you need more information before you give it a shot, please let me know!