I am being completely honest when I tell you that I know absolutely very little about Hawaiian cuisine. It’s not just for reasons of distance; Hawaii is something like 5,000km from here, but Japan is about twice that, and I do know some things about Japanese food. Yet I can’t think of a single Hawaiian restaurant in this city. I’ve never seen any classes offered locally on how to cook Hawaiian food. We just don’t have a lot of Hawaiian people who have immigrated here, and who would blame them when you compare their tropical paradise with our frozen Canadian winters?

Given my lack of knowledge on the subject, it should surprise no one that I was stumped the other day when a Food Network show I was watching started talking about Loco Moco. Running the words through an online translator yielded, disturbingly, “crazy mucus” from Spanish — an unfortunate name, but no worse than “toad in the hole” or “bubble and squeak”. I then learned through Wikipedia that “the traditional loco moco consists of white rice, topped with a hamburger patty, a fried egg, and brown gravy”. “Well,” I thought, “That doesn’t sound hard. Let’s give it a go.” 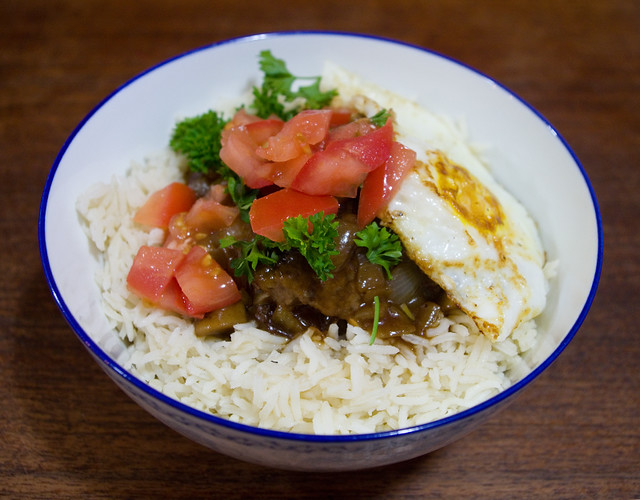 I used the first recipe that came up when I searched for “Loco Moco recipe”: Guy Fieri’s Loco Moco. I don’t have any context to know how accurate this recipe is, but it was very tasty. Even my children requested that I make this comfort food again, and they are my harshest critics. Be warned, though, that this recipe says that it makes two servings, but it made enough for my family of four with leftovers. I know food portions are generally larger in the US, but do you really need a whole cup of rice (before cooking, so about two cups cooked), two quarter-pound hamburgers, and two fried eggs per person? That’s one heck of a lot of food.

Since we liked this dish so much, I think I may look into more Hawaiian dishes when I have the chance. Poké looks delicious, given that I love the sushi bowls that it resembles (and there are some restaurants in town that serve it now). Spam musubi looks like fun as well.