I enjoy watching food television, not just Food-Network-style how-to or cook-off kinds of shows, but also ones set behind the scenes in restaurants or where culinary explorers travel the world, exploring every kind of local cuisine. The first season of The Mind of a Chef, the one that focused on Chef David Chang, inspired me for months. I also read a lot of books about food and cooking, and watch as many documentaries as I can get my hands on, especially if they’re from the BBC. While I draw a great deal of inspiration from my relentless consumption of media, exposure to so many dedicated professional chefs makes my own skills pale in comparison. I’d say I’m a pretty competent home cook, but I’m no Jamie Oliver. 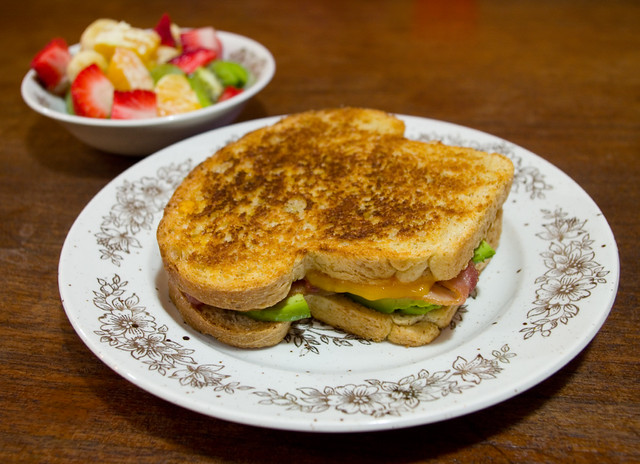 Grilled cheese with avocado and bacon, made with Nan’s Pan Rolls bread.

This past Friday I finally got my hands on the library’s copy of Anthony Bourdain’s Kitchen Confidential; it was first printed in 2000, but there’s still at least a six-week wait if you put it on hold. I’ve already devoured it, and now I can see what all the fuss is about: it’s one hell of a read. Bourdain writes the same way he speaks, or at least the same way he narrates in his television shows, and it is captivating. I can’t help but read it in his voice. But in all the drug-fueled and alcohol-soaked escapades about which Bourdain writes, one paragraph on page 75 really stood out to me as a home cook:

Unless you’re one of us already, you’ll probably never cook like a professional. And that’s okay. On my day off, I rarely want to eat restaurant food unless I’m looking for new ideas or recipes to steal. What I want to eat is home cooking, somebody’s — anybody’s mother’s or grandmother’s food. A simple pasta pomodoro made with love, a clumsily thrown together tuna casserole, roast beef with Yorkshire pudding, all of this is pure exotica to me, even when I’ve been neck deep all day in filet mignon and herb-infused oils and all the bits of business we do to distinguish restaurant food from what you get at home. My mother-in-law would always apologize before serving dinner when I was in attendance, saying, “This must seem pretty ordinary for a chef…” She had no idea how magical, how reassuring, how pleasurable her simple meat loaf was for me, what a delight even lumpy mashed potatoes were — being, as they were, blessedly devoid of truffles or truffle oil. 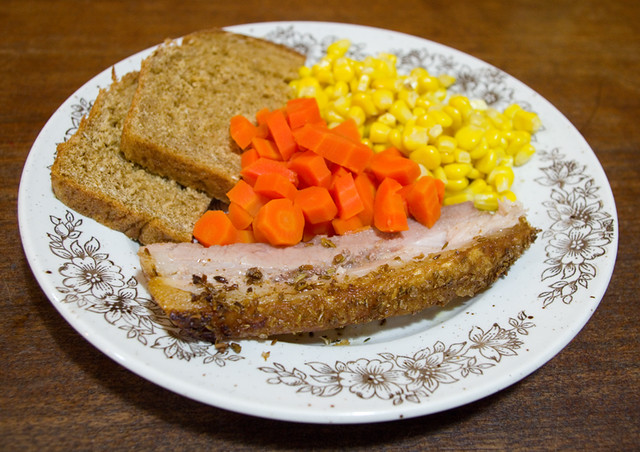 I found it validating that a celebrity chef would place a high value on home cooking (and not just because there’s no truffle oil, I’m sure — although that stuff is available at regular grocery stores now). Professional chefs and home cooks work in vastly different environments, with separate types of audiences and numbers of people to feed. Restaurants cooking and home cooking are two very different beasts. Expectations (outside of the very basic ones like “don’t burn the food”) are not necessarily worse or better, but they are definitely not the same. 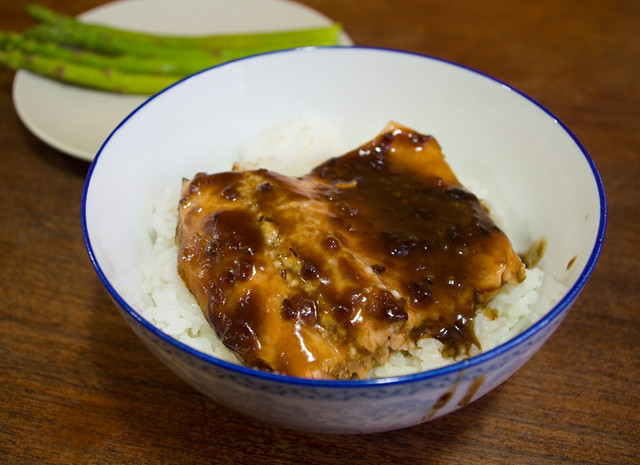 Trout with Sable & Rosenfeld Tipsy Teriyaki Sauce, served over Kokuho Rose sushi rice, with a side of steamed asparagus.

There was an episode of Ramsay’s Kitchen Nightmares that stressed the difference between a restaurant chef and a home cook. In the “Fish and Anchor” episode, Gordon Ramsay said:

A fish recipe from one of my cookbooks using monkfish is on the menu board. It’s quite eerie when you see your own food on somebody else’s menu. It’s for the home cook at home, not in a f***ing restaurant.

And later in the same episode, critiquing the chef in the failing restaurant:

His menu’s made up of cookbook recipes designed for home cooks to lovingly slave over. But for one man to try and cook them from scratch for a restaurant is madness. The dishes are just too complicated to be cooked quickly. 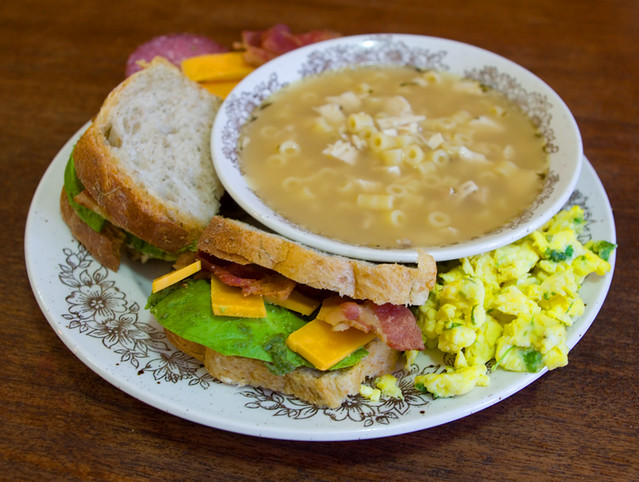 The more I watch and read about the restaurant industry, the more I admire the people who work in it — and the more I realize it’s just not for me. Even if I thought I had the chops, at my age, it’s a little late to start working 16-hour shifts and learning a physically- and mentally- demanding trade. I just have to keep reminding myself that I’m not a professional chef — and that’s perfectly okay! I will learn from all the materials I can gather, and I will put that knowledge towards creating the best food I can for my family and for myself. That’s not always easy either: balancing food quality/nutrition one one hand and budget on the other; finding dishes that everyone in the family likes (or at least that nobody hates); preparing food throughout the stresses and conflicting schedules of family life.

And if a celebrity chef wants to come over for my clumsily-thrown-together tuna casserole or meatloaf with lumpy mashed potatoes, my door is always open. And I promise I’ll hold the truffle oil.