Here in Canada, early March is when we start to see the first signs of spring. Generally, the snow hasn’t melted back much, so nothing green is growing, and even if the days peek above freezing, the nights are cold and bitter. There will still be a few good snowstorms. So how is it different from the rest of winter? The maple sap starts running.

It’s less obvious in the cities, where less of the economy is based on maple syrup, but a lot of private land-owners still tap their trees — even if they only have one or two. If you’re not from around here, you may not recognize the silver buckets with lids attached to the maple trees. A single tree may not yield much (it takes 40L of sap to make 1L of syrup), but home-made maple syrup is enough of a lure even for city-dwellers. Restaurants and coffee shops suddenly start featuring maple-flavoured everything, in much the same way the pumpkin spice craze happens in October. 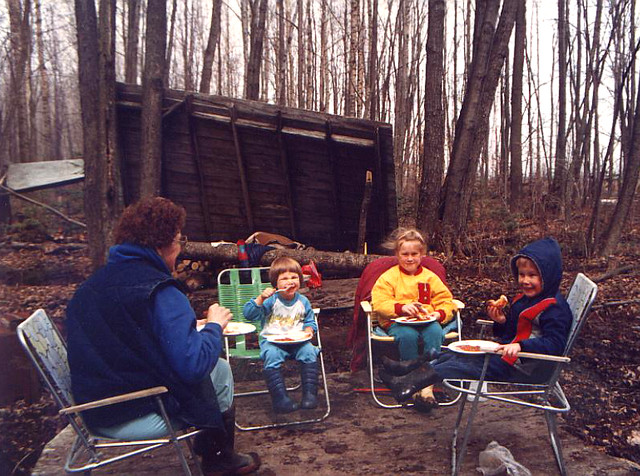 Left to right: my Nan, the host family’s child, me, and my little brother, at the sugar bush.

One of my fondest childhood memories is of visiting a sugar bush. I couldn’t tell you if we did it once or many times, or if I even seemed to appreciate it at the time — but it’s an event that stuck in my memory.

Now, a sugar bush is not the same thing as a sugar shack, which is a rough translation of the Québecois cabane à sucre. From page 10-11 of Anita Stewart’s Canada:

In the maple forests, les cabanes were the quarters for those harvesting the sap. There was a wood stove for cooking and keeping warm. With cast-iron frying pans, the traditional foods of les cabanes à sucre evolved to satisfy the enormous appetites. Fèves au lard (pork and beans), liberally sweetened with maple syrup, simmered on the stove-top. Potatoes were fire-roasted, and eggs were poached in syrup. There were thin crêpes made form sarrazin (buckwheat flour). Ham and bacon, both requiring little refrigeration, were fried, and omelettes were cooked to go with them. Syrup was poured over everything. And the workers didn’t just make syrup — they boiled down sugar, fermented partially boiled sap into maple vinegar and even made maple wine.

The tradition of visiting a cabane à sucre is still going strong to this day. Not surprising, as maple syrup is one of our biggest crops — according to Wikipedia, Canada produces about 80% of the world’s maple syrup, and the province of Québec accounts for 85% of that total. Here on the Ontario/Québec border, many of us cross the river to visit Quebécois cabanes, although there are a number of them on this side as well. 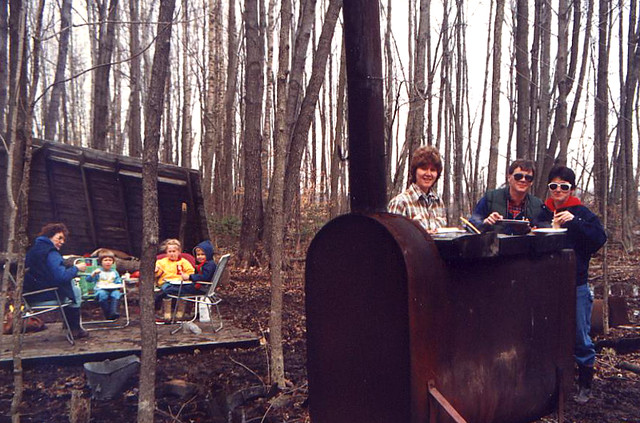 Left to right: my Nan, the host family’s child, me, my little brother, the host mother, my father, and my mother at the sugar bush.

However, there is a great deal of difference between a cabane à sucre and a sugar bush. I visited many cabanes as a child, mostly as school field trips, and they didn’t stick with me the same way my visit to the sugar bush did. A modern cabane (especially one open to serve the general public) is part of a commercial maple syrup enterprise. The building is large, snug, and well-appointed. Often you can pay a flat rate and eat as much maple syrup, pancakes, baked beans, breakfast sausages, and bacon as you can stuff into your face. They are used to having a huge number of people cycling through the place in the spring. If you are lucky, they will offer tours of the facilities.

A sugar bush, on the other hand, is just the actual forest with the tapped trees. There is no fancy building with extensive cooking facilities. If you’re invited to one of these, you have to know the owner. They are often on private land and are not part of a commercial enterprise. Any food cooked is over a campfire or on a camp stove. A sugar bush is rustic, outdoors, and, to a kid, much more interesting. I remember getting to wander the woods, peek into the sap collection buckets, build things out of sticks, and tromp through the mud and slush. Then it was time to eat fresh-cooked pancakes and bacon and sausages doused in fresh-made syrup. Then we explored some more. We came home that night filthy, stuffed to the gills, and absolutely exhausted. It was wonderful. 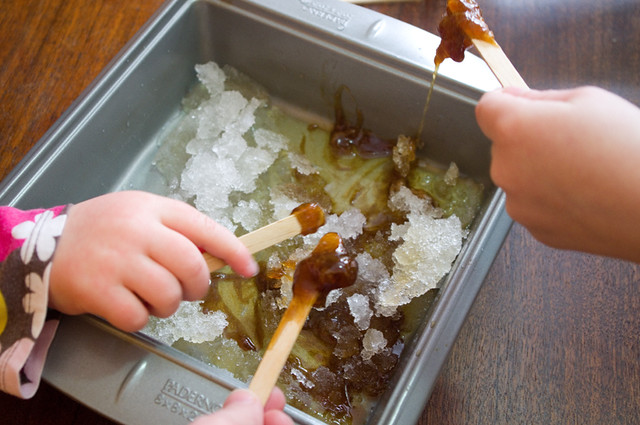 Thing 1, Thing 2 and I making tire in the quickly-melting snow.

Unfortunately, we no longer know anyone who owns a sugar bush, so bringing my kids to one is not an option. To my surprise, their schools have never arranged for a field trip to a cabane à sucre, so I think I will have to take them to one sometime soon. But with the snow on the weekend (hopefully the last one of the season) I was able to at least make tire with them this year.

Tire (from the French word le tire meaning taffy pull) is pronounced pronounced like “teer”, not like the rubber things you put on wheels. It is the absolute simplest way of making maple candy. Basically, you boil the syrup, then pour it over clean snow. (Full instructions at TheKitchn.com.) Now, I don’t actually own a candy thermometer, so I had to straddle the line between “not hot enough” and “burnt”. I think I came down a little bit too much on the “not hot enough” side, so the tire didn’t end up as solid as I’d like. Also, the day had warmed up a bit and the snow I’d set out plates for the night before was more slush than anything else. The kids didn’t care. It was still maple syrup deliciousness. 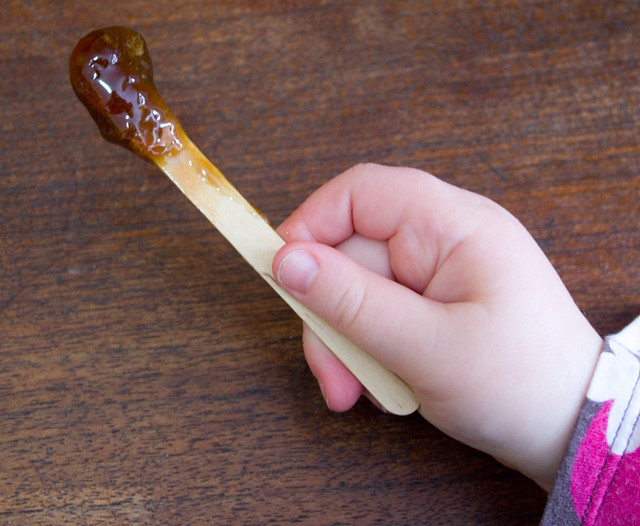 It’s not necessary to use a wooden craft stick to eat the tire, but it’s much less messy that way. Just roll the candy around the stick when it’s still a little bit warm, and ta-daa! Instant lollipop. Oh, and you can totally used shaved or crushed ice if you don’t have clean snow. The fresh snow part is tradition, but it’s not 100% necessary.