Looking to expand my culinary horizons, I picked up a few packages of frozen boar meat from the grocery store a while back. The fact that it was on clearance might have dictated my choice somewhat; most wild meat is, well, wildly out of my budget. The best special was on wild boar medallions wrapped in pork bacon from Natural Frontier Foods. I had seen something similar before done with chicken (M&M Meats does a decent one), but I’d never tried boar before. 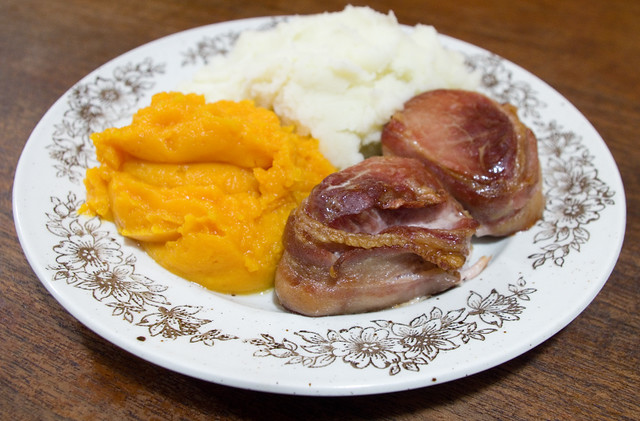 The original plan was to barbecue, but it pissed down rain all day, and even if I did juggle the food and an umbrella, I didn’t want to deal with the mud in the back yard. Instead, I put the meat on a broiler pan and baked it in the oven, then served it with mashed sweet potatoes and mashed potatoes. Granted, it wasn’t the prettiest meal, but I enjoyed it.

My first impression of boar meat is that it’s really not much like domesticated pig at all. The bacon wrapping did confuse the issue a bit, but I found the meat denser, leaner, and redder — much more like steak in texture. The flavour was a bit gamy, but nowhere near as much as venison or even lamb. It was also an extremely rich dish; it didn’t take much for me to fill up. Would I eat it again? Most definitely. However, I think I’m the only one in my house who would. My husband thought it was too gamy, and my children just ate the bacon and left most of the boar behind. I ended up with almost half of the meat packaged up in the fridge as leftovers. Perhaps I will slice it thin and make myself wild boar sandwiches for lunch for the next few days. It definitely won’t go to waste!