By now I am well into seasonal canning mode. Two weeks ago I started with my first batch of strawberry rhubarb butter, and last week I found a great sale on mini cucumbers in bulk, so I had to make dill pickles. We were on the last jar from the batch that I made right before Christmas anyway, and fresh pack dill pickles must rest for at least a month in a cool, dark place before eating to develop flavour. I mean, they’re safe to eat right away, but they taste better after some time.

This is what my canning setup looks like, with some adaptations depending on what food I’m preparing. For large batches or large cans, I tend to have two hot water baths boiling at the same time. The largest pot on the right is actually my pressure canner, but it works quite well as a large hot water canner if I don’t clip the lid closed. The smaller pot near the front is where I brought my pickling liquid to the boil. I’ll admit it, I take the quick and easy route when I make dill pickles and I use Bernardin Dill Pickle Mix. It means that I can completely skip the typical fermentation stage; I just have to wash and cut up the cucumbers, pack them into hot sterilized jars, pour over the pickling liquid, seal, and then process the jars in a hot water bath. This means that I can make up a huge batch of pickles in a matter of a few hours (as opposed to about five days with the fermented method). 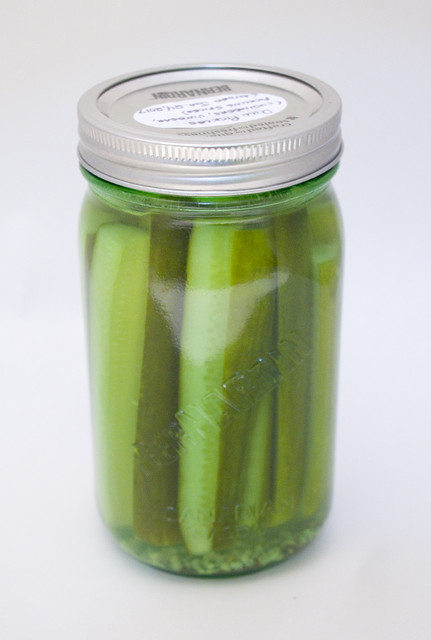 This year I tried out a type of jar I’d never used before, ones that have a vintage-look green tint. Normally these jars are about twice the price of the standard clear glass jars of the same size, but I was lucky enough to find a whole bunch of them at $4.00 for a six pack ($0.66/jar) at, of all places, Dollarama. I bought out that location’s entire stock. I mean, a twelve pack of the same size regular jar at Canadian Tire currently goes for about $12.99 ($1.08/jar), so it was definitely a bargain.

One of the reasons that coloured jars used to be considered better for canning purposes is that they allow less light to pass through the glass, and hence the food stayed good longer. Exposure to sunlight can cause canned goods to decompose faster and/or to discolour, which is why historically most food storage is in a cool, dry, dark place. The coloured glass is just one more way to help. These days, though, it’s mostly a fashion thing, a hearkening back to the old-fashioned canning jar look. I personally think that the green-tinted jars are great for pickles (or any other green preserve), but that they’d sadly make different-coloured foods look like they’d gone off in the jar. Even if the food was fine, it might not be eaten just because of its looks. I mean, have you ever tried to eat green eggs and ham? I know that even when I make the eggs myself and am sure that they are safe, I can have a difficult time choking them down because my brain is telling me that they’ve gone off because of the colour. So I think that I will stick to using the green jars for cucumber pickles, or for crafts or storage where the colour doesn’t matter.