I’m a city girl, but I’ve been in and out of farmland since childhood. Ottawa’s a pretty small city, and it is surrounded by (and encompasses) a great deal of agricultural property. You’d be hard pressed to find anywhere in town that is more than a 45-minute drive from planted fields (traffic aside, of course). 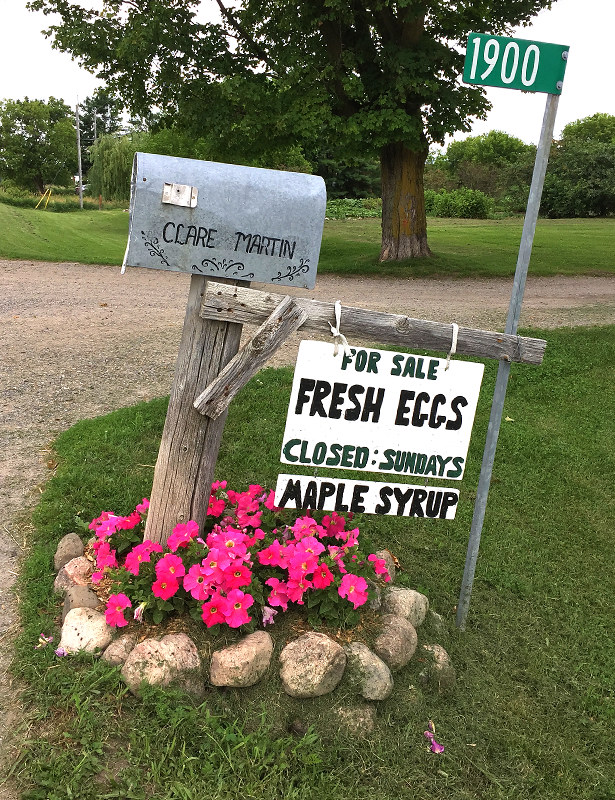 Sign at the farm at 1900 Kerr Line, Foresters Falls, Ontario

Once you get out of the city proper, you start seeing lots of signs like the one above for home-based businesses selling produce and goods that were grown, raised, or made on the property. However, there has been a sharp decline in the number of little sheds that I saw as a child at the end of just about every farm lane. I don’t know what has changed that caused them to become unused; did they become unprofitable to staff? If the booths were unmanned and ran on the honour system, was there just too much theft to make them profitable? Too much spoilage? Was it caused by the change over years in how farms are being run (increasingly, one large farm produces only a few select things and brings everything else in based on the profits, versus the older model of many smaller farms that fed their residents first and then sold the excess, if there was one)? Is it just because there are fewer people living on farms overall, as machines replace manual labour? Or is it because as the larger farms buy up their neighbours’ land, they leave the homes on the property to sit empty? A combination of all of the above, possibly in addition to factors I know nothing about? 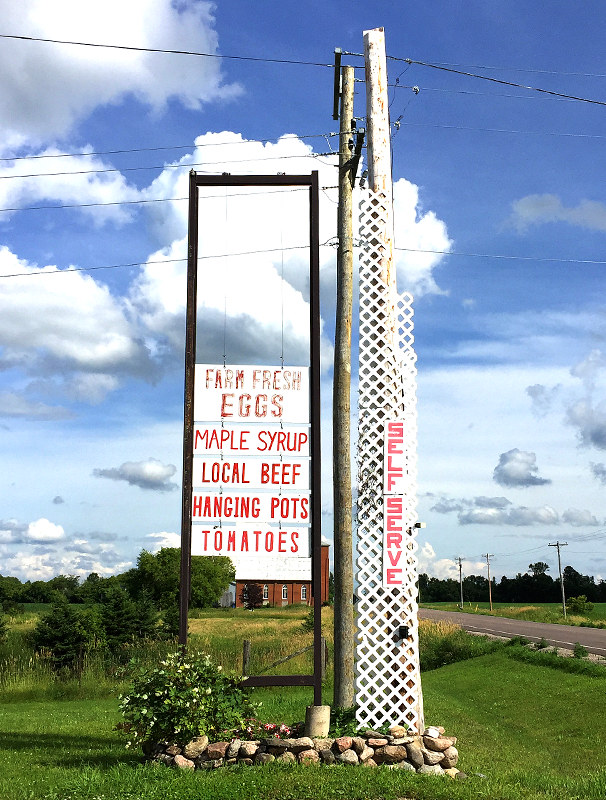 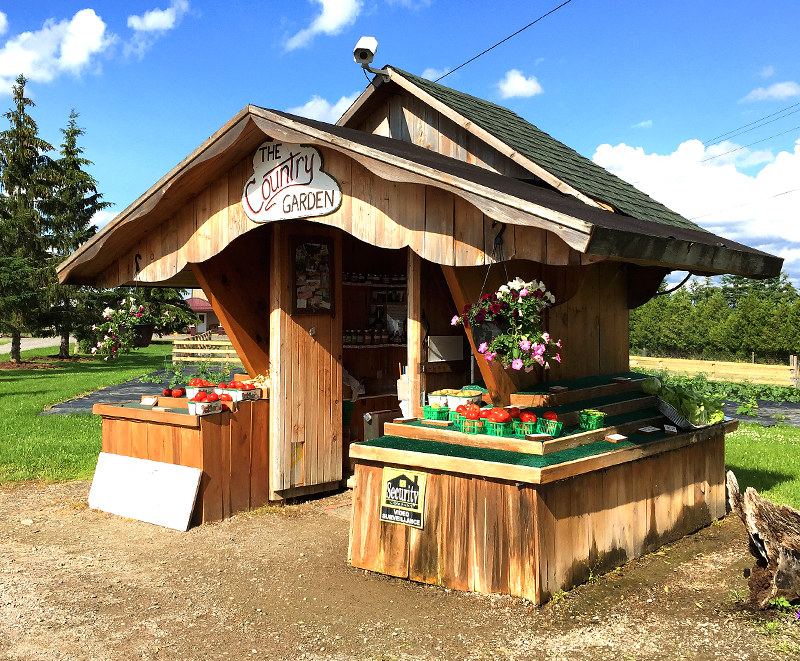 However, there are still a few roadside booths going strong. The Country Garden on Queen’s Line is the best example of a successful booth that I know of. The farm itself appears to be tended with a great deal of care. The grass is mowed up to the road, the fruit trees are neatly trimmed, there are flowers planted at the base of all the signs and hanging baskets wherever they’ll fit, the dirt road is without major potholes. And the food, oh the food… I make a point of stopping there every time we’re in that neck of the woods, and I’ve been going for almost ten years now.

The Country Garden is unmanned unless it is being stocked, and hence it runs on the honour system. There is some security in the shape of a lock box and a security camera. This seems to work out well for them overall, although there have been hiccups. Inside the shed there is a board with photos of people who have stolen from the Garden before, along with pictures and a written request for people to help in identifying the thieves. I don’t have a lot of patience with thieves in general, but I think it’s pretty despicable to steal from a small business like that. 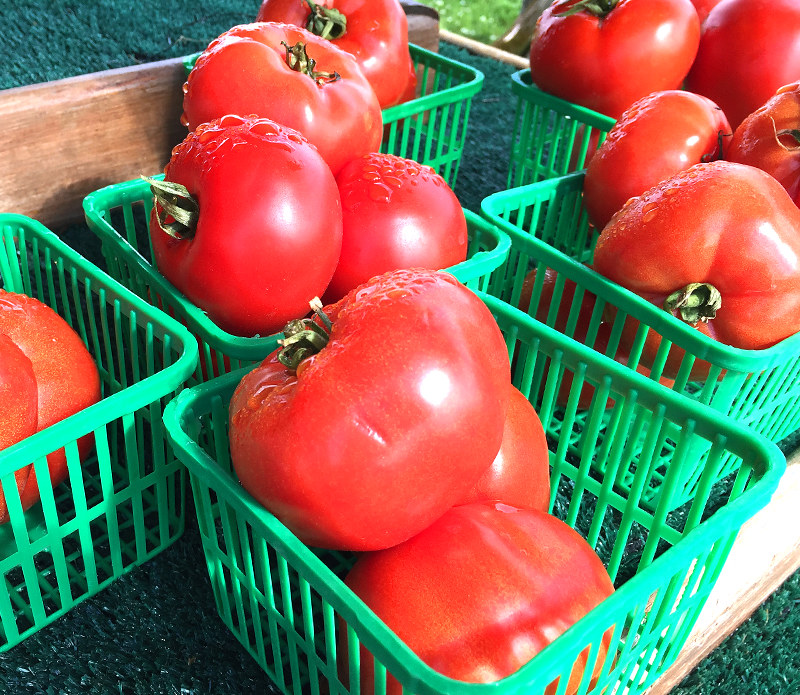 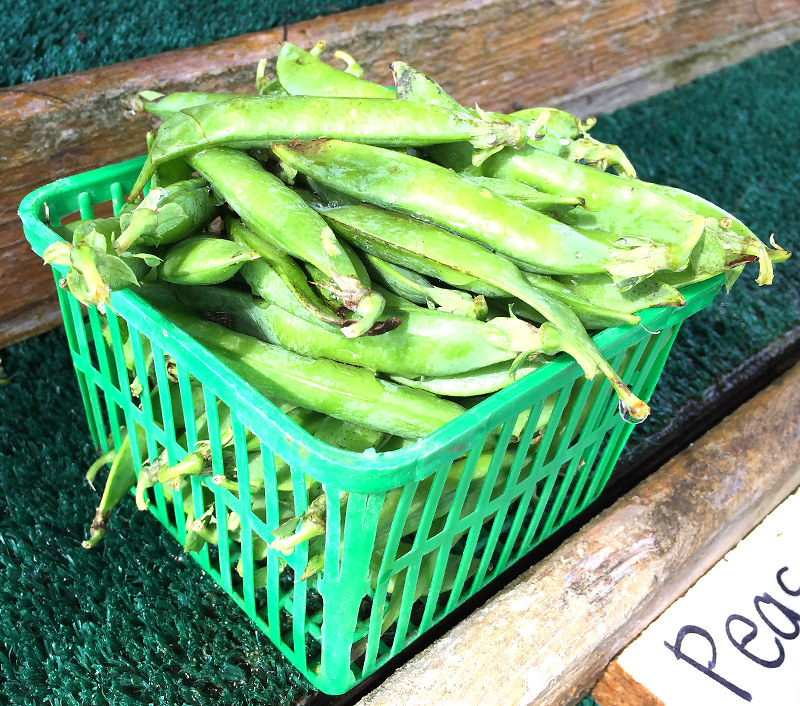 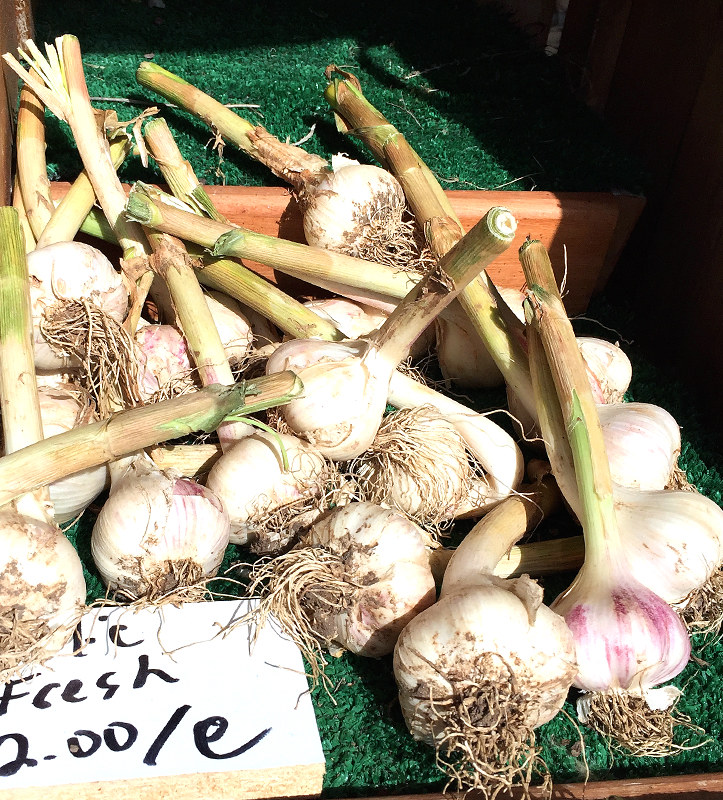 The shelves on the outside of the main booth (shed?) are stocked up every day with fresh-picked produce from the farm (which I believe is run by the Martin family). This time of year there is a plenitude of tomatoes, peas, garlic, potatoes, lettuce, and green onions. Of course, this varies by season; I’ve been by in the fall when there are literal trailer-loads of squash for sale. 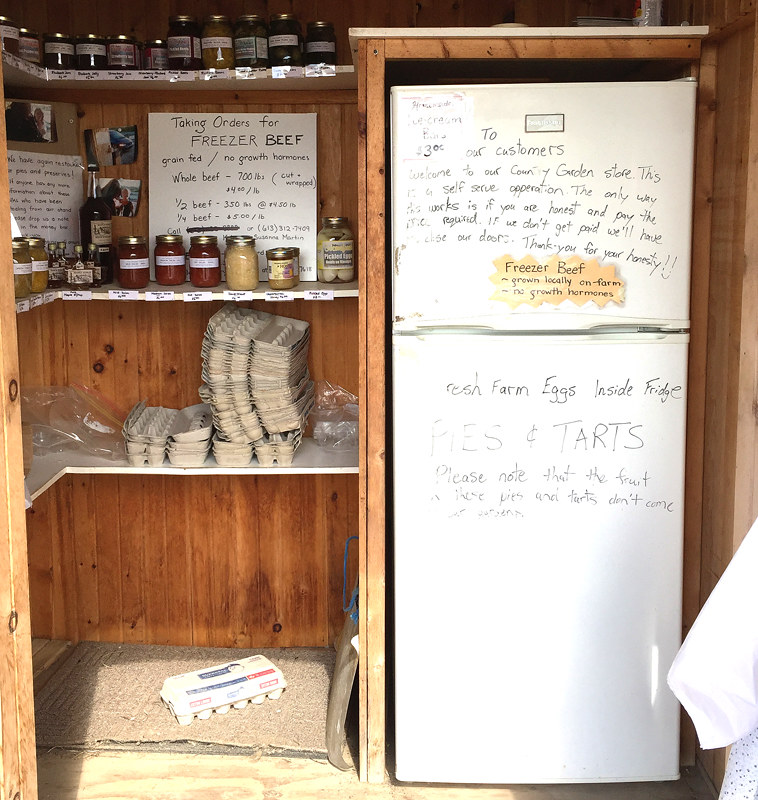 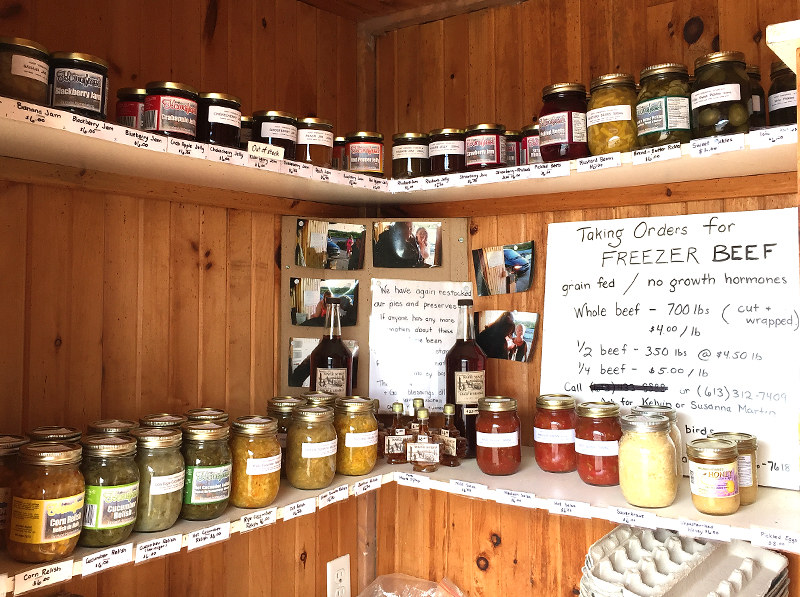 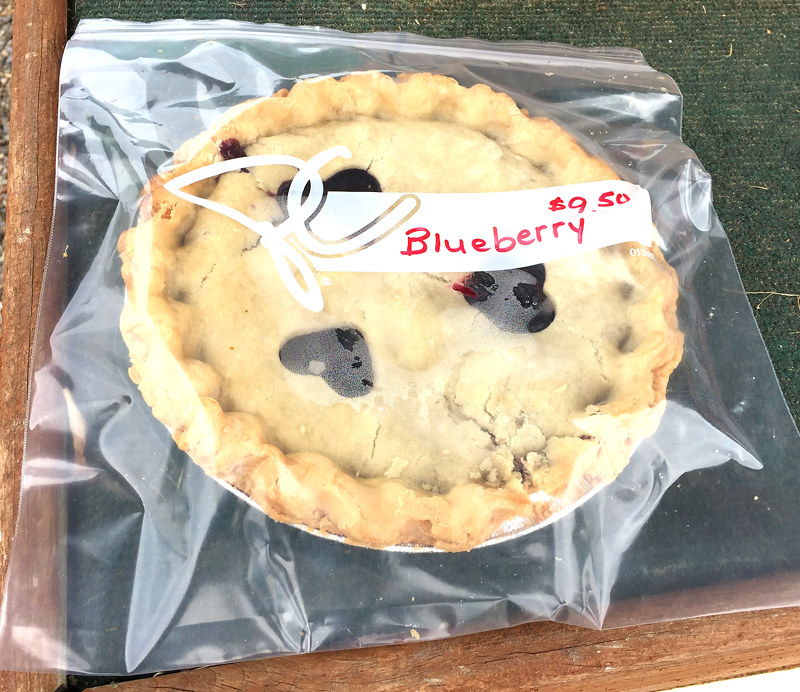 Of course I had to buy a blueberry pie.

Inside the shed (booth?) are shelves lined with preserves, some of which come directly from the farm and others from Horst Homebaking (another local business, which is run by Noreen Horst at 74 Government Road (Foresters Falls, Ontario)). All of the preserves I’ve bough from The Country Garden have been bursting with flavour and not over-sweet, which is exactly how I like them. There is also a fridge that is re-stocked daily with eggs, fresh-baked pies and tarts that would make Dean Winchester weep, pepperettes, and sausages. The freezer is regularly refilled with cuts of beef and homemade ice cream bars. 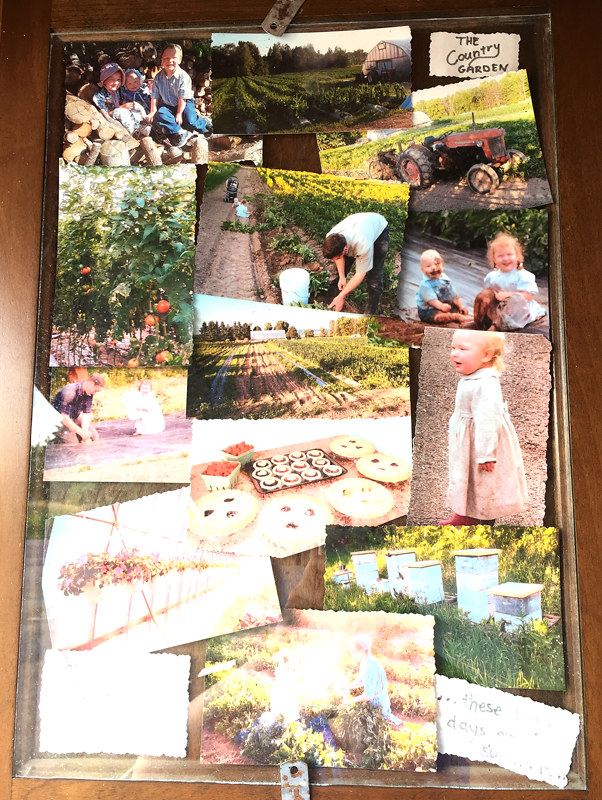 There are photos on display of the family working on the farm; by their garb I would guess they are Mennonites, but I am not 100% sure. Most of what I know about Mennonites is based on the food I have bought from their booths at farmers’ markets — which has invariably been delicious. 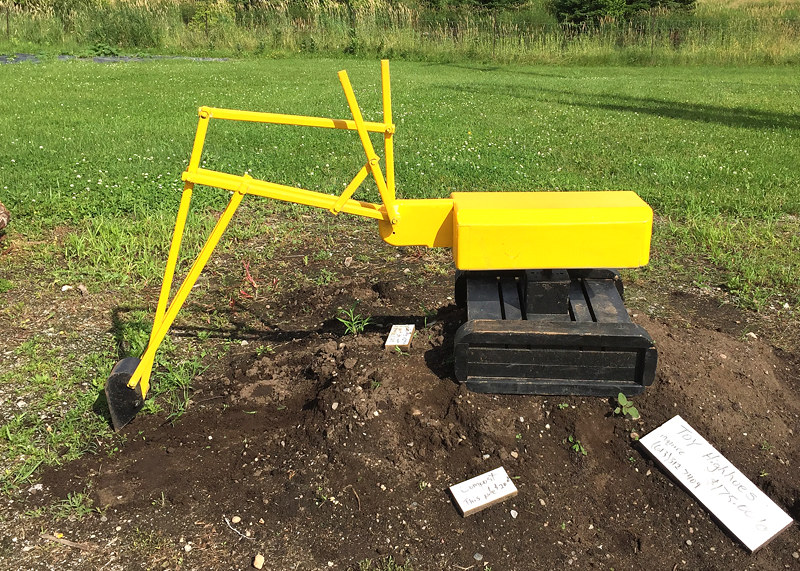 Occasionally there are crafts for sale, like the above ride-on toy digger. 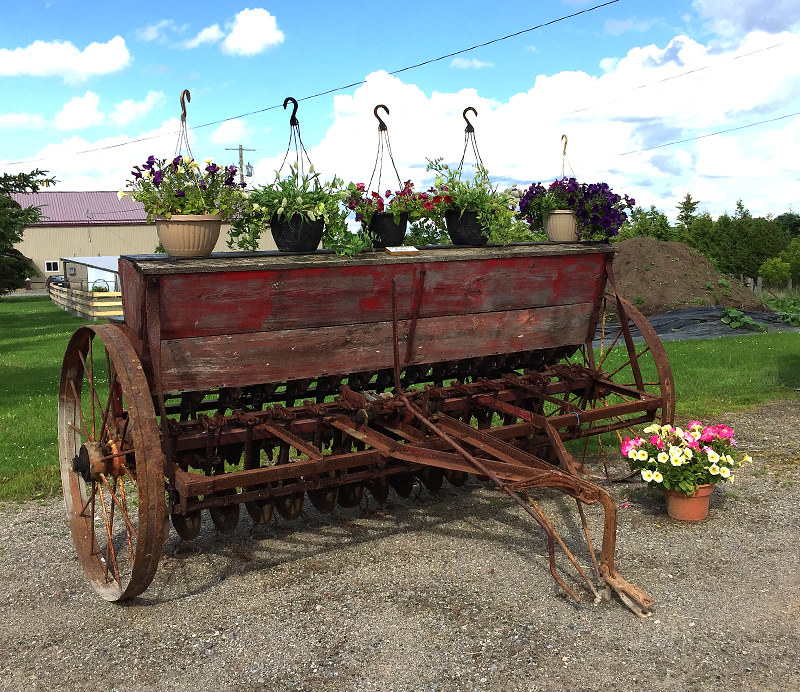 And there are often ornamental plants and hanging plants on offer as well.

If The Country Garden is still running for another ten years, as I hope it will be, I plan on buying fresh local produce and goods from them for all of that time. They don’t exactly have a web presence, but I can tell you that they’re open seasonally Monday through Saturday. They only take cash and, as you’ll have to deposit your payment in the lock box, you’ll need exact change. The Country Garden is located at 3024 Queens Line (Foresters Falls, Ontario), just down from the intersection of Queen’s Line and Acres Road, and close to Queen’s Line United Church (currently not in use). I highly recommend stopping by if you’re in the area. You won’t regret it. Come early if you can, as their stock can run low later in the day.