My brother’s main Christmas gift to me this year was the Jamie Oliver 5 Ingredients Quick & Easy Food cookbook (2017). I don’t know if he picked it because he’d been perusing my blog for gift ideas. Maybe it was because he heard me gushing about Oliver after watching yet another interview with him like this one with Russell Howard, which had me in stitches. At any rate, the first recipe that I wanted to try out (okay, after the Ginger Shakin’ Beef, which I didn’t originally know was from this book) was the Sticky Port Stiry-Fry on page 220. 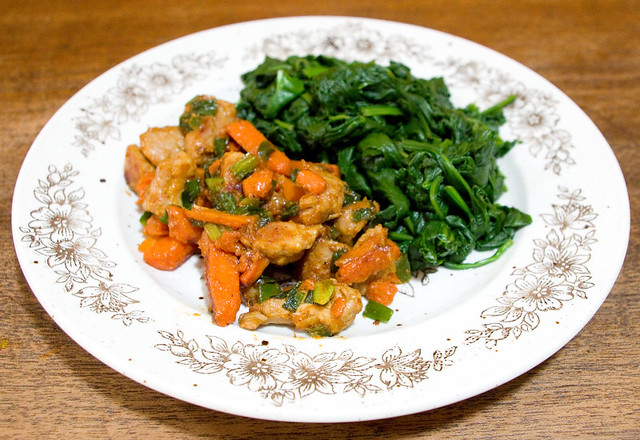 I used regular old carrots sliced small instead of the mixed-colour baby heirloom carrots specified in the recipe, mainly because none of the grocery stores around here had anything so fancy this time of year. Being a hardy root vegetable, you can get standard orange carrots pretty cheap here all year ’round. However, baby/heirloom carrots are only a summer thing unless you’re willing to pay through the nose for imports. If it doesn’t store well, or there isn’t a high enough demand (or price point) to make it worthwhile to ship it from down south, it can’t be found during the winter. Produce variety suffers greatly in Canada once it gets cold — and it’s a million times worse outside of the cities! And yet the selection and availability is miles better than it used to be, even in my lifetime. I watched a program a while back (Tales from the Green Valley) which recreated a 1600’s British farm: the kind of place where my ancestors would have lived. It really struck me that at one point the narrator says, “After several days, the February snow is finally melting in the valley.” A couple of days of snow. My poor, poor ancestors, who came to Canada after being used to winters like that, with such things as “winter growth” in the fields, and then trying to survive in Canada. It’s a wonder that I am here today, quite honestly.

Back to the recipe: I do have one quibble with it: the portions. The cookbook says that this dish serves 4. Honestly, if I hadn’t prepared any sides (and the recipe doesn’t say “to be served over rice” or anything), my family would have been very, very hungry. I’d say that, by itself, this recipe serves two at most. I ate mine with a side of steamed spinach, but I think that the stir-fry would have gone even better over rice or noodles to stretch it. 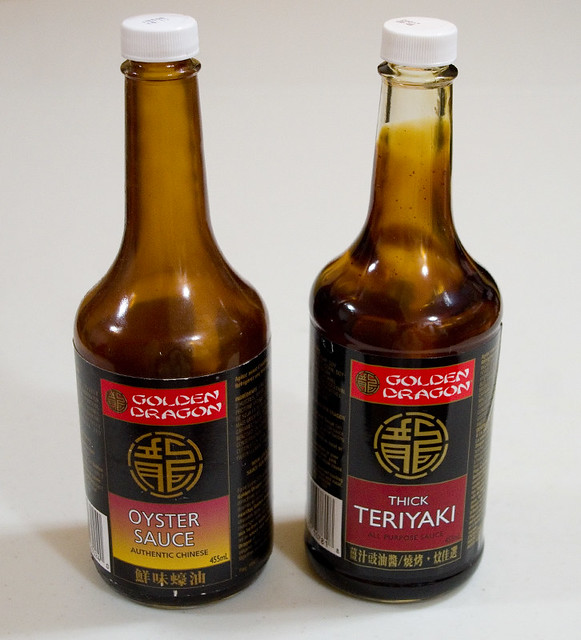 Now, here is why I called this entry “Not Really Sticky Pork Stir-Fry”: my husband and I kind of messed it up. Not quantity-wise, that we triple-checked. No, we messed up the sauce. You see, my husband was stirring the food while I was chopping ingredients, and I passed him a bottle and asked him to add what I thought was teriyaki sauce to the dish. Instead, I accidentally gave him the oyster sauce. Assuming that I knew what I was doing, he didn’t read the label on the bottle until after he’d added the sauce to the carrots and pork. In my defense, your honour, the bottles look practically identical, as the above photo shows. Luckily my hubby caught the mistake before we added the honey, which I think would have been disastrous. As it was, the oyster sauce on the pork, carrots, and green onions tasted really good. So if you’re ever looking to change this recipe up, just omit the honey and swap teriyaki for oyster.

Would I make this recipe again? Most definitely yes, with the aforementioned changes: a side dish (or doubling the quantities), and actually using the correct sauce. It was tasty, cheap, easy, and quick, which definitely makes me want to have it again, especially on busy weeknights.