Christmas breakfast was a big thing at my house when I was a kid. Mom and Dad pulled out all of the stops and bought all kinds of awesome food that we pretty much never had any other time of the year. I associated these foods so strongly with the holidays that it came as a great revelation to me when I moved out that I could buy Havarti cheese with dill or caraway seeds, or Babybel miniature cheeses, or Stoned Wheat Thins all year long. 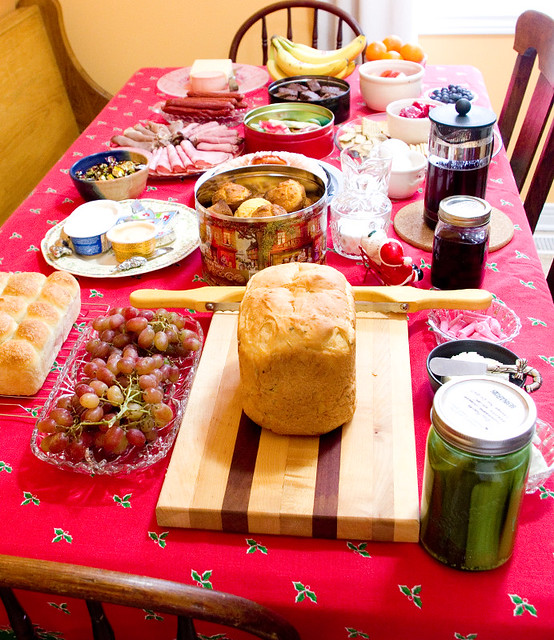 We’ve been hosting Christmas breakfast at our house since the year that Thing 1 was born. Given that she would have needed to be fed and then probably put down for a nap sometime during the festivities, it just made sense for us to stay home and have the rest of my family come to us. Breakfast is generally served buffet-style, so that everyone can have a little bit of everything and then head over to the Christmas tree to open gifts, often while still munching. 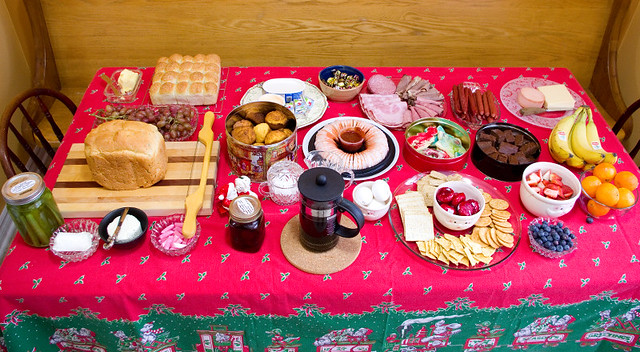 This year I served (working roughly from left to right):

In case you’re worried, no, the seven of us did not eat this all in one sitting. This much could have easily fed twice that amount of people, with food to spare! The point of this kind of meal (which only happens once a year) is that everyone can have as much as they like, and then it all gets packed away to become lunches and dinners for the next week or so. There were still a few leftovers as of New Year’s Day, but that was of the kind of thing that takes forever to go bad, like crackers. Some of it will probably even make its way into the kids’ lunches in the new year.

*I discovered that these rolls can be left to do their second rise overnight in the refrigerator, and then just popped into the oven to serve fresh-baked for breakfast. If you’re going to do so, make sure that the pan you use is metal and not glass, as it takes the glass longer to heat up and can make the bottom of the rolls take a little too long to cook. Also, if the top is browning but the bottom isn’t quite done yet, cover the top of the rolls with aluminum foil to prevent them going from “browned” to “burnt”.

**Classic White Bread, found on page 24 of Betty Crocker’s Best Bread Machine Cookbook (1999) — but with half the sugar, olive oil instead of margarine, and about 1/4 cup fresh chopped rosemary added.