I’ve always liked fixing things and restoring them to their original condition — or better. My father is a great handyman and tried to pass at least some of his knowledge down to my brother and I, on the theory that even if we didn’t end up with a passion for working with our hands, at least we’d be able to do budget-friendly repairs when necessary. I agree with Dad that it’s always a good skill to have in your arsenal.

My interest lies predominantly in refinishing, refurbishing, upcycleing, and building small furniture. I’ve been doing it since I was about fourteen years old, when I sanded down and repainted a bedside table for my grandmother. Ever since I could remember, Nan had always had an old wooden chair beside her bed where she sat her books and alarm clock, and I thought that she needed something prettier. I painted the table cream and stenciled it with flowers on the top. She used it in her bedroom until the day she passed away, and then it came back to me, about twenty years later. The little table was a little worse for wear and covered in circular rings where Nan had set her nightly cup of tea, which to me meant it had been used often, and had served its purpose well. 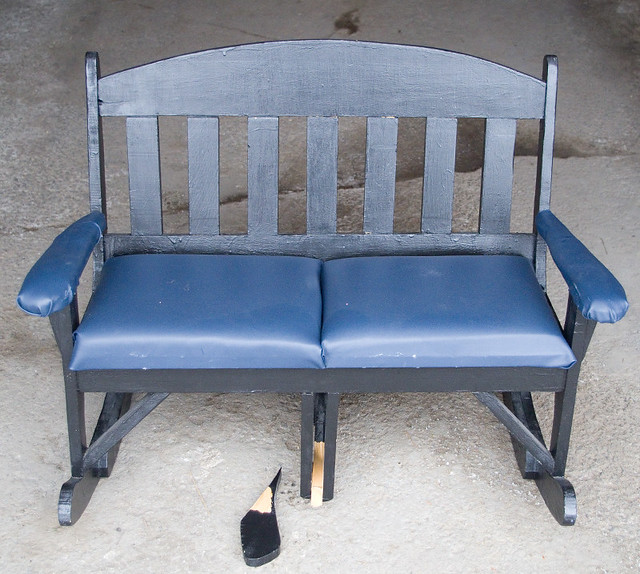 Now, when I saw this old, broken children’s bench rocker (or should it be called a double rocking chair?), I knew I had to work on it. I think it was handmade, or at least assembled from a kit. It bore no maker’s mark and showed the telltale signs of being finished in a slap-dash fashion (although that could mean that it was refinished once already). The paint had been put on very thickly and ran in globs in places. The faux-leather blue upholstery looked to have been replaced at some point. And, of course, one of the rockers was broken. 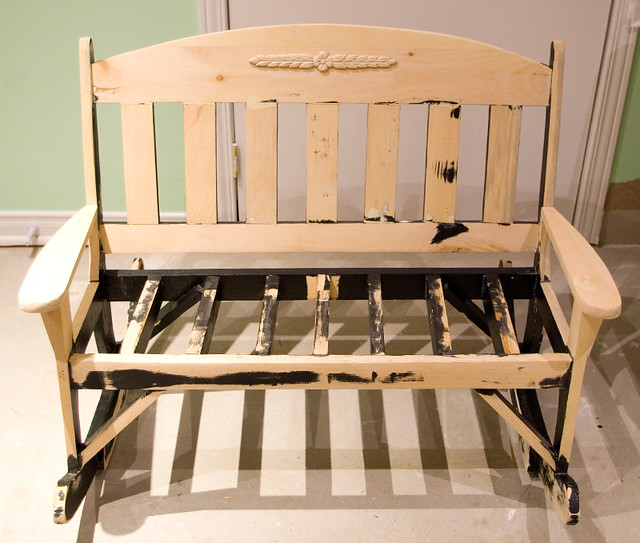 But it was made of solid pine underneath, and it looked to be of solid construction. It couldn’t be that hard to sand the paint down and then repaint it, right? Oh, I should know better than to think that any refinishing job will be simple. The paint was polyurethane, I think, and it melted from the friction of sanding instead of coming off properly. And, of course, the paint was on really, really thickly. It seemed to take forever (multiple sanding sessions, for sure) to get the darned stuff to the point I could paint over it. I probably would have been better off trying to use a heat gun instead of a sander, but mine was shoved in the back of a cupboard and I honestly forgot that I had it until well after the fact. There was also other damage to be repaired. Luckily, the bench was constructed so solidly that I could just take the center rocker right off, so that was easy at least. 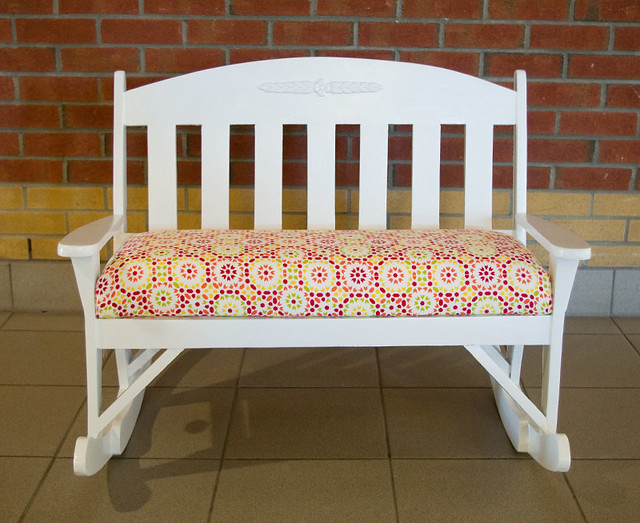 It took way longer than I had planned, but many coats of primer/sealer and paint later, I love how it turned out! I reupholstered the seat with extra-thick padding for a very plush finish. It’s super comfortable, and strong enough to even hold an adult and a child side-by-side — although most adults will have their knees bent up to their chin. I used exterior paint and outdoor-rated fabric, so it should have a washable, tough finish that will be kid-resistant. 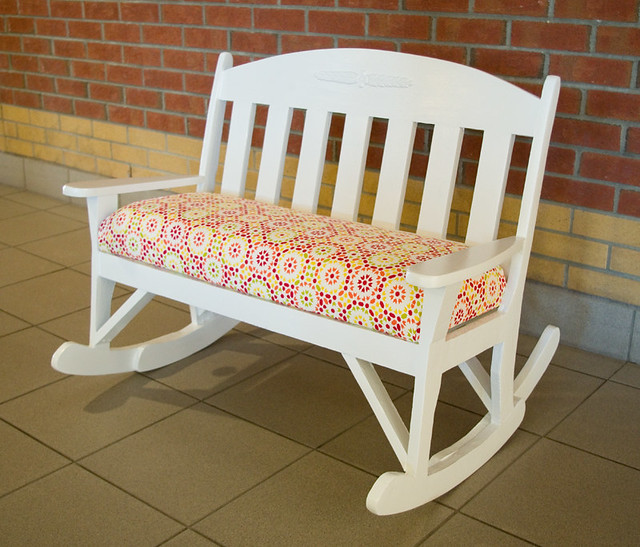 Now to find it a home!