My trip to T&T last week resulted in me bringing home a whole load of new things I wanted to try, of course. The first one that I broke out was Sun Noodle Brand Instant Shoyu Ramen. It’s about $6.50 per frozen package, but each one serves two, so even though it’s not as cheap as the dried, instant stuff, it’s still a pretty darned affordable meal. 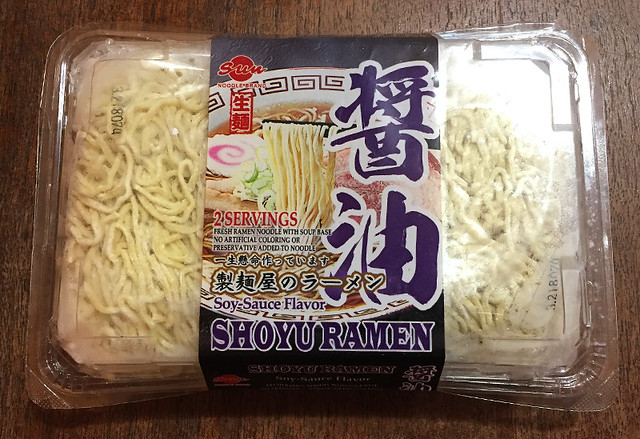 I’ve had shoyu broth, which is predominantly chicken and soy sauce flavoured, in Japan, and at Ichiko Ramen (formerly Ginza Ramen), and I’ve made it at home as well. (The fantastic — and easy! — homemade soup base recipe can be found on page 8 of Simply Ramen by Amy Kimoto-Kahn (2016) or at easypeasyjapanesey.com.) Although I’m by no means an expert, I think that I can at least tell what shoyu ramen is supposed to taste like, for the most part. 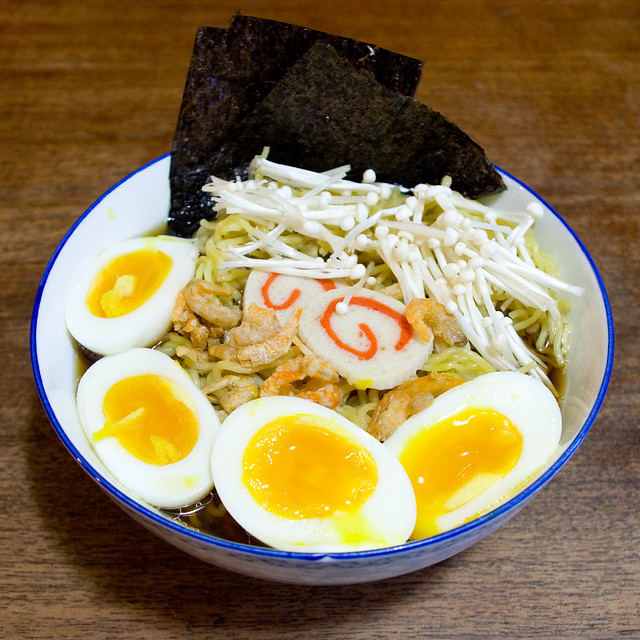 The package only contains the noodles and the broth, though; the instructions on the back of the package recommend adding your favourite toppings. I needed to make a quick meal, so I went with what we had in the fridge/freezer/pantry: soft-boiled eggs, narutomaki, enoki mushrooms, dried shrimp, and nori.

The verdict on this quick dinner was pretty positive. Sure, it’s not as good as homemade, and definitely not as good as restaurant fare. But it’s miles better than the dried instant kind. The noodles have a better consistency, which in the case of ramen means that they’re chewier (dried ones have a tendency to be soggy when cooked). The broth had more depth of flavour, although the one complaint I did get is that it was a little bit too salty. That might have been because of the dried shrimp, which are quite salty in and of themselves. Usually I add them to my homemade broths, which are very low in salt, and that works well, but they may not be a great combination with packaged stuff. It also could have been because I didn’t water down the broth enough. The instructions gave a range of the amount of water you could use, and then said “to taste”, so I guess our “to taste” is a little more watery than the official directions.

That being said, they were definitely good enough to try again! Maybe I’ll switch up the toppings next time; we could definitely have used more vegetables that night.