Boyed up by not having messed up dinner over the long weekend, I decided to try a recipe that has been on my to-do list ever since I saw it on Tasty Japan: Pork Belly Onigiri (English translation in the video comments). The simplest onigiri is just a palm-sized ball of sticky rice, shaped by hand or pressed in a mould, and served cold. Often, they have a filling (such as canned salmon or barbecue eel), and they are served with a sheet of nori (the same seaweed that wraps some kinds of sushi), which makes them easier to grasp. They’re one of the most ubiquitous snacks you can find in Japan. You can buy them at nice restaurants, but they’re also in the cooler of every corner store and even in vending machines. 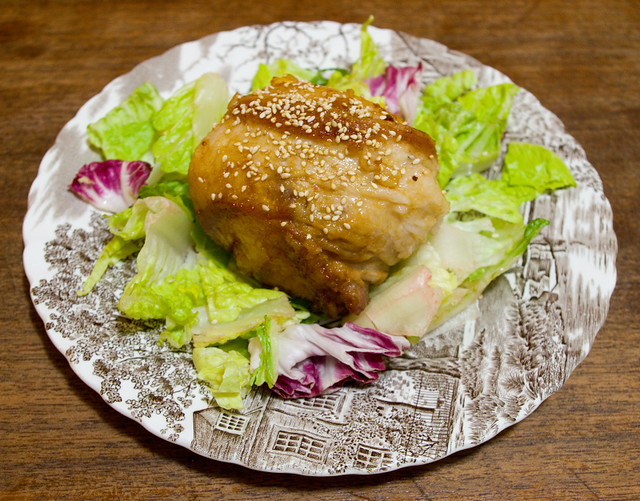 These pork belly onigiri definitely take it up a notch when it comes to complexity. First of all, there’s a whole soft-boiled egg in the middle, which means that the rice balls are going to be a lot bigger than the standard kind. Also, they’re wrapped in pork belly (the same cut of meat as bacon, but not cured), fried, and then a sauce is added.

My pork belly onigiri were very tasty, even though I couldn’t find any shiso leaves at a store in my area, and hence had to omit that ingredient. However, all but one of my onigiri fell apart in the final stages of cooking. I think it was because the pork belly I had at home had been thick-sliced at the butcher shop. Really, what you want is something as thinly-sliced as cheap bacon, not the thick cuts that are better in tonkotsu ramen. It’s totally possible that I just might not have squeezed the balls firmly enough before frying them. 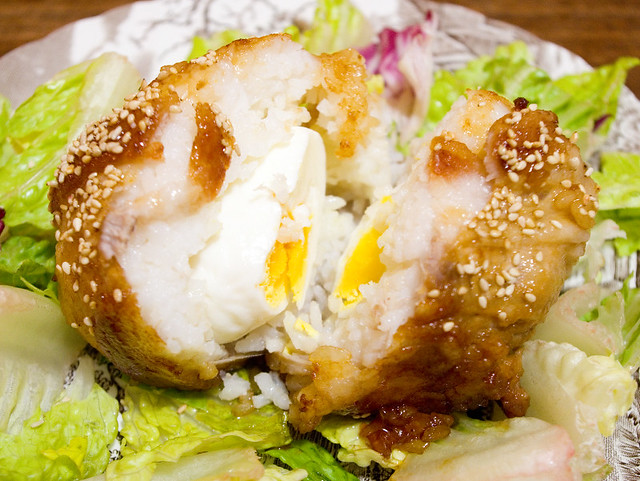 In addition, despite cooking the soft-boiled eggs for exactly the amount of time recommended, they ended up being hard-boiled instead of soft. Should I try this recipe again, I think I will deliberately undercook the eggs a bit so that when they cook a bit during the frying stage, they’ll end up perfect in the middle.

Each one of these onigiri was a meal in and of itself; my kids couldn’t finish theirs, and my husband and I were very full after eating ours. I think they might make a nice appetizer if they were made using quail eggs instead of chicken. Quail eggs being a pain in the butt to peel, let alone getting the timing right for soft-boiled, I don’t think I’ll be trying that myself any time soon. Overall, this was a fun meal to make and it was very tasty, even if my end result was far from perfect. I would definitely recommend giving it a go.