Last night for dinner, in an attempt to create a meal with the ingredients I already had on hand (despite my freezer becoming progressively emptier), I decided to grill some pork belly slices on my smoker grill. I’d done my research and it can be done, with apparently tasty results, too! I figured I’d serve it with tiny boiled potatoes and steamed spinach, i.e. what I had left in the fridge. So I prepared the meat, heated up the grill, and threw the strips on.

For the first four minutes (I set a timer), everything was going well. The pork belly was grilling nicely, changing colour from “uncooked” to “cooked” with a few grill marks, just as intended. So I flipped the strips, closed the lid, and set the timer for another three minutes, as directed. I popped back inside to deal with the side dishes while it cooked.

Then my hubby came through the door, having walked down the street from the bus stop, and asks me, “Are you barbecuing something? Because something smells really burned outside.”

There was a MASSIVE flare-up on the barbecue while I was otherwise occupied. Smoke was billowing out of the chimney. When I opened the lid, the flames shot up higher than I was tall. Every piece of meat in on the grill was on fire.

I turned off the power to the grill, both to remove some of the fuel from the fire and because smokers have a fan that forces the air through the machine. Unlike a gas barbecue, which has no moving parts (or at least mine doesn’t), the fan on a smoker literally fans the flames, which I very much did not want. Then I grabbed the longest tongs I owned and pulled the charred remains of the meat from the grill, blowing some of it out as I removed it. Fuel sources removed, the fire died down and quickly burned itself out. At least I didn’t have to use the fire extinguisher. (Due to the construction of a barbecue, which is made to circulate air through, I couldn’t just throw a lid over it to starve the fire entirely of air, like you would with a grease fire on a kitchen stove.) 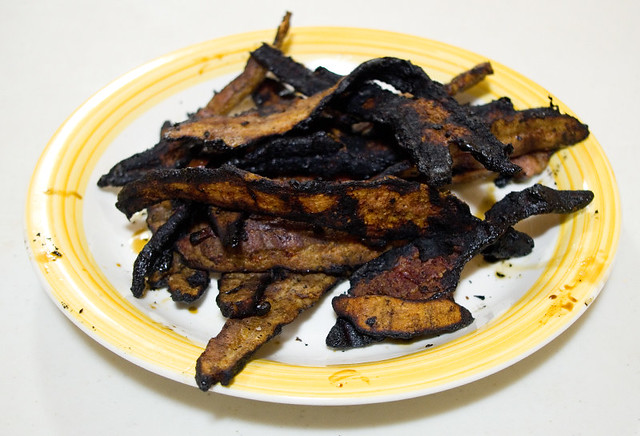 So here you have the cremated remains of what was supposed to be last night’s dinner. In an interesting twist of fate, the few pieces that weren’t completely charcoal were actually still pretty tasty. Despite my absolute fail this time, I think I may try to grill pork belly strips again. However, it will be the only thing I will do at the time and I will watch it like a hawk. Hopefully I am capable of learning from my mistakes.

Husbeast and the kids had Kraft Dinner and hot dogs in the end, while I had leftovers, by the way. After this debacle, I just didn’t have time to make another dinner from scratch.