Ever have one of those nights where you just forget to have dinner? I did that the other day. I had a late lunch, which threw off my internal schedule, and then I wasn’t at home for dinner. It didn’t even occur to me until something like eleven o’clock at night that I should probably eat something. Of course, by then most things are closed, so going out to pick up some ingredients was problematic at best. Normally my late-night food runs toward sandwiches or cold cereal, but the girls had polished off the bread and all that was left in the cereal bag was dust. So I had to get creative. 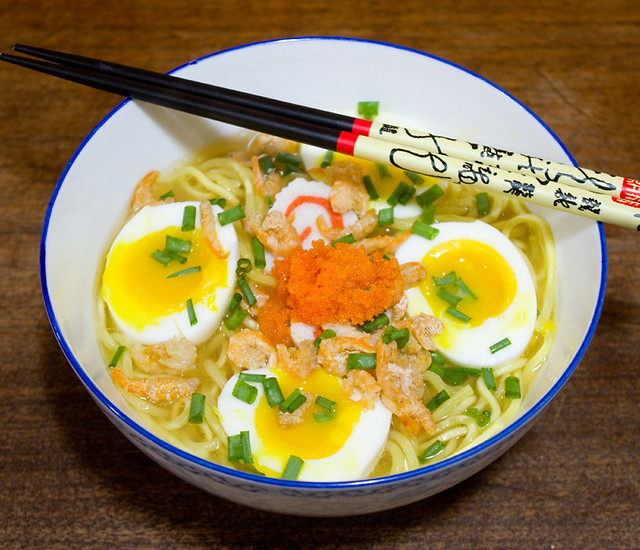 I rummaged through the freezer and found some ramen noodles and sauce packets — originally from two different meals and hence likely by two different brands, but they were missing their original packaging. I did have a few eggs, the remnants of a frozen naruto fish cake stick, some frozen masago, and a few frozen dried shrimp. Aside from the green onions, which I grabbed from the garden, it was a little short on the veggies, but the fridge was bare! I grabbed an apple on the side to make up for the lack.

It wasn’t a difficult meal to make, but it’s definitely more effort than I usually put into food right before bed.