I’m sick as a dog today with a powerful head cold, sinus headache, and fever, which means for the next little while I won’t be cooking anything. Thank goodness for Thanksgiving leftovers! Given that I can’t write about what I’m cooking or crafting or thrifting, since I’m really not up to any of the three, I thought I’d tell you a bit about my recent trip to New Jersey.

My husband had a business trip in the Dover area; I left Thing 1 and Thing 2 with my parents for a week and traveled with him. We drove down and stayed in the hotel room that his work would have paid for in any case, which meant that this was a really cheap trip. While my hubby was working during the day, I had access to a car and got to explore the area. Since I have been to the US a few times before (honestly, Dover’s only about a six hour drive from home), I didn’t feel the need to visit the major tourist sites. Instead, I planned my trip with a lot of help from Atlas Obscura. 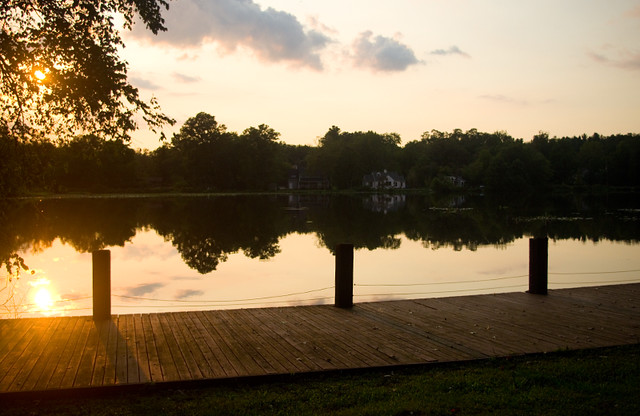 One of my stops along the way was Grover’s Mill Pond, which is accessible to the public via the Van Nest Park. The park has a free parking lot, bathrooms, a playground, a field, and a paved walking path. The path leads to Grover’s Mill Pond, which, according to a plaque, was the subject of a restoration project in 2008-2009, when the West Windsor Township and the US Army Corps of Engineers restored the aquatic habitat by dredging silt from the pond and restocking it with fish. It’s a lovely, peaceful place, with a small boardwalk and benches from which you can enjoy the view.

More importantly, at least to me, is that in the October 30, 1938 radio play broadcast of the radio adaptation of the H.G. Wells novel The War of the Worlds, Grover’s Mill is the site of the very first Martian landing. (In the original novel, the first landing is on Horsell Common, in Woking, Surrey, England.)

If you’re not familiar with The War of the Worlds’ radio broadcast, there are four informative plaques along the path to the pond. These are part of an Eagle Scout project by Danny Fitzpatrick in 2013. In part, he writes that:

The War of the Worlds was a science fiction novel by H.G. Wells that was adapted by the Mercury Group on CBS radio at 8:00pm on October 30, 1938. The production was directed and narrated by Orson Welles, who also voiced many of the characters. When Welles and Howard Koch adapted the book for a radio play, the script was written and performed so it would sound like a news broadcast about an alien invasion. While the broadcaster made several periodic announcements that the show was a fictional performance, many listeners believed that the events were actually happening.

The broadcast was one hour long and consisted of multiple news bulletins which interrupted “Ramon Raquello and His Orchestra” playing smooth jazz. The skit involved on the scene reporters and scientific authorities who reported on the events occurring as the Martian capsule landed in Grover’s Mill. The Martians attacked and destroyed the New Jersey State Militia and then they attacked other cities throughout the country, including New York City.

The last portion of the broadcast was a monologue by Welles explaining that the Martians had been killed by a pathogen. To end the show, Welles went back to his normal persona and announced that the show was a Halloween joke.

There are debates as to how many people took this fake news broadcast seriously, and how widespread the ensuing panic really was. However, it cannot be denied that the broadcast caused a sensation that remains memorable to this day. It was considered important enough that it was made part of the National Recording Registry of the Library of Congress in 2003. You can listen to a recording of the original broadcast here, or, if you would prefer, a transcript is available here.

The entire time I walked through the park, I had The Eve of War (a modern version of which I have linked above) playing in my head. For me, the War of the Worlds that I grew up with wasn’t actually the 1938 radio play, but Jeff Wayne’s Musical Version of The War of the Worlds, which was narrated by Richard Burton. I believe my mother had it on record, or she borrowed it from one of her friends. She then made my brother and I a copy on tape — and it terrified me. The concept of the Red Weed terrified me especially, for some reason, and I would have the most vivid nightmares. My little brother, on the other hand, absolutely loved it. He would listen to it over and over as loud as his little tape deck would play, and I could hear it throughout the house. It got to the point that even hearing the opening chords was enough to bring me to tears — so, of course, in the way of all pestering younger siblings, my brother made a point of torturing me with it as often as possible.

As an adult, though, I can appreciate the album for its beautiful score and slightly trippy 70’s vibe. And I think that my grounding in this album made me really appreciate the sound design of Steven Spielberg’s 2005 adaptation, where the tripods sound like a cross between those opening chords and the ship from Close Encounters of the Third Kind. 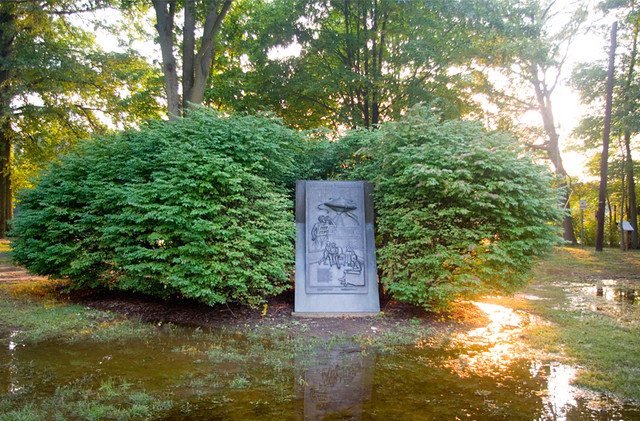 Looking toward Grover’s Mill Pond from the park (but not actually visible from the path to the pond due to a bush), there is a large metal plaque dedicated to the fictional Martian landing site. If the bush wasn’t in the way, you’d be able to see the pond directly behind the monument. Despite what this photo looks like, the area is not usually under water; New Jersey has had record levels of rain this summer, and the ground has simply reached its saturation point, so there is standing water in a lot of lower-lying areas. 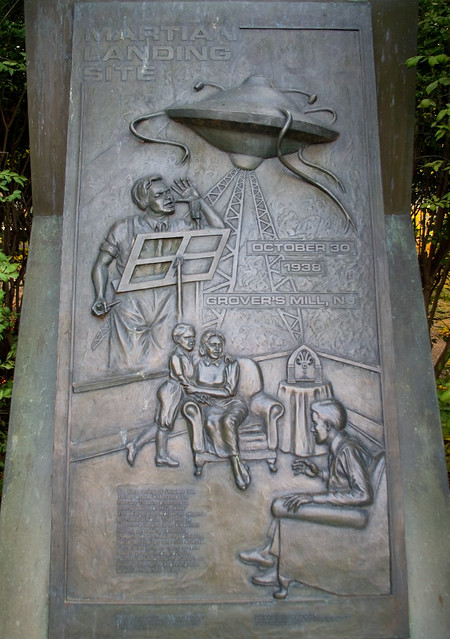 One of the things I find interesting about this monument is that the Martian ship more closely resembles a flying saucer, while the crafts are described as tripods in the broadcast, just like in the original novel. The idea of flying saucers really caught on after the 1950’s, long after the broadcast. I guess the scaffolding-looking area underneath the saucer could be tripod legs, but it really looks much more like a modern depiction of a flying saucer.

It’s difficult to read in the photo, but the writing reads:

On the evening of October 30, 1938, Orson Welles and the Mercury Theatre presented a dramatization of H.G. Wells’ The War of the Worlds as adapted by Howard Koch. This was to become a landmark in broadcast history, provoking continuing thought about media responsibility, social psychology and civil defense. For a brief time as many as one million people throughout the country believed that Martians had invaded the earth, beginning with Grover’s Mill, New Jersey.

Although this was a small monument, I really wanted to see this particular place because The War of the Worlds played such an enormous part of my cultural upbringing. I am sure that it influenced to my interest in horror storytelling, music, and sound design. It definitely contributed to my lifelong obsession with the weird and wonderful.