On my trip to Hamburg last winter, I ate out often on Lange Reihe, a street with many restaurants not far from my hotel. On one such excursion I stopped in for lunch at Frau Möller (apparently named after the owner’s dog): a local pub that was busy whenever I walked past. I sat at the bar, since the rest of the pub was packed. The waiter was able to provide me with an English menu, thank heavens, because my accent is so bad that I can’t get a native-speaker to understand my small spattering of German. 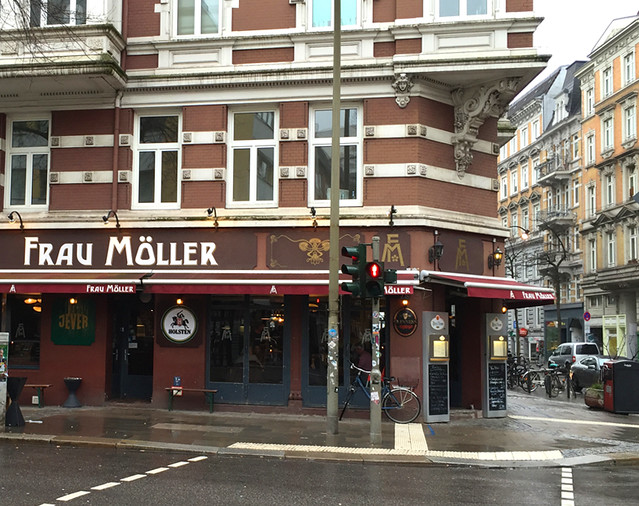 One section of the menu was labeled “Hamburg stuff”, which caught my attention immediately. Why visit another country if you’re not willing to try the local dishes? I was intrigued by the entry for labskaus, which had a description of the side-dishes but not the dish itself. I asked the server what it was, but his English failed him and he just shrugged and said, “Labskaus is… Labskaus.” So I had to try it. 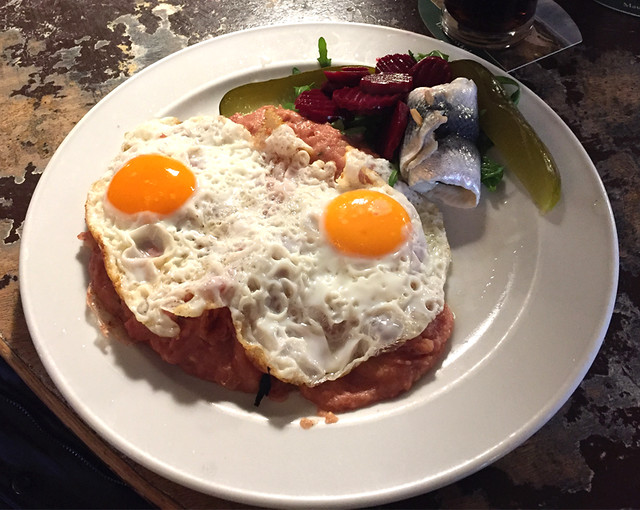 The toppings were two eggs sunny-side up, dill pickles, pickled beets, and rollmops. I’ll confess to never having had rollmops before, but a brief examination revealed that they are a sweet pickled fish (herring, I found out later) wrapped around a cucumber pickle and held together with wooden skewers. But what was underneath the eggs? That, apparently, was the labskaus itself. I feared at first, based on the looks alone, that I’d ordered myself some kind of raw ground meat. But I took a bite, and realized that it couldn’t be. Upon tasting, I could tell it was some kind of meat (corned beef) and potato mixture. But what gave it its characteristic pink hue?

A bit of research back at the hotel when I could use the WiFi informed me that the pink came from pickled beet juice. All of these ingredients preserve well and were commonly available on seafaring vessels, making this dish popular both aboard ship and in coastal cities in Germany, Denmark, Norway and Sweden. The British have a similar dish, a beef stew called lobscouse, which is eaten by sailors and is popular in seaports like Liverpool; it is from this that the slang “Scouse” accent gets its name. 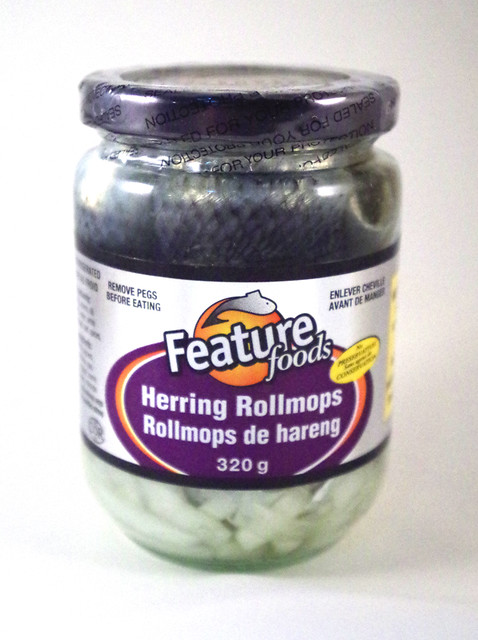 When I came back home, I wanted to try to make labskaus for myself, since, as I’ve complained before, there aren’t any German restaurants around here. I decided to try a simple recipe from My Best German Recipes. Sourcing the ingredients was actually a lot harder than making the dish itself. Corned beef can’t be found out of a can for love nor money around here, so canned had to do. But which variety to choose? None of them were German. I read all of the ingredients and eventually settled on the one kind that had no sugar. I thought I’d have to make my own rollmops, but as it turns out you can buy them pre-made in most grocery stores. They even have the same shape of skewer as the ones from Frau Möller. 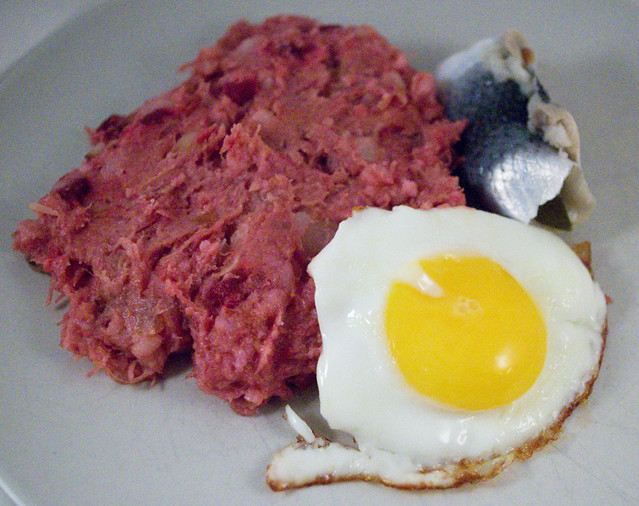 My final product was definitely edible, but paled in comparison to the ones I had in Hamburg. I would like to try to make this dish again, but this time with corned beef that has never seen a can. I think that this would make all of the difference in the world. I will have to try a specialty butcher, rather than a grocery store. I am not satisfied enough with my first attempt to try it without better meat.