I’ve been working on my bread-making skills over the last few weeks, much to the happiness of my family; it generally makes the house smell great even when I fail. For these experiments I have been relying predominantly on World Breads: From Pain de Campagne to Paratha by Paul Gayler (2006). It’s not a very long book (it’s subtitled “a small book of good taste”), and I’m determined to make my way through it recipe by recipe. 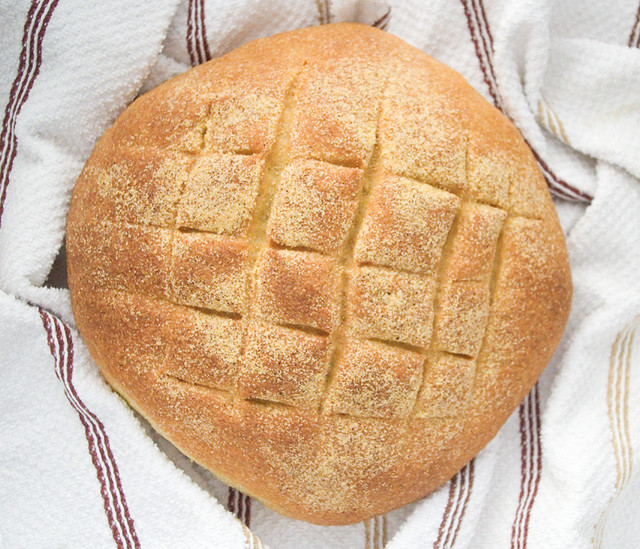 This isn’t a kind of yeast bread I’d ever had before, although in texture and flavour it greatly resembled the cornmeal muffins that we eat here around Christmas. To my taste, this recipe needed either a little more sugar or a little more salt… I need more experience to figure out which, but I’m leaning more toward salt, since the recipe (and many other perfectly good ones) don’t call for sugar at all. 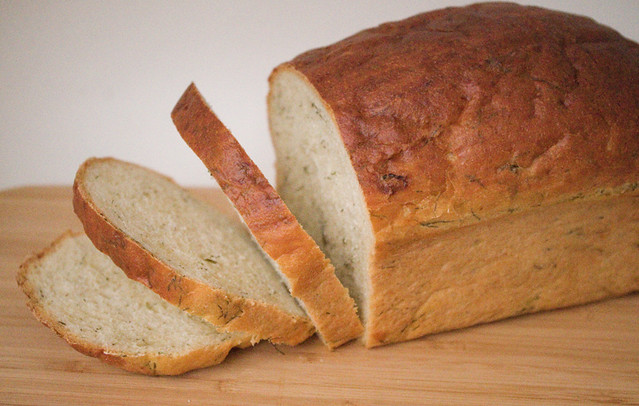 This bread was absolutely delicious, needing no tweaking, and I would make it again in a heartbeat. There’s not enough curd cheese (I used ricotta) to make it greasy; rather, it adds a touch of moisture and helps the bread be light and fluffy. 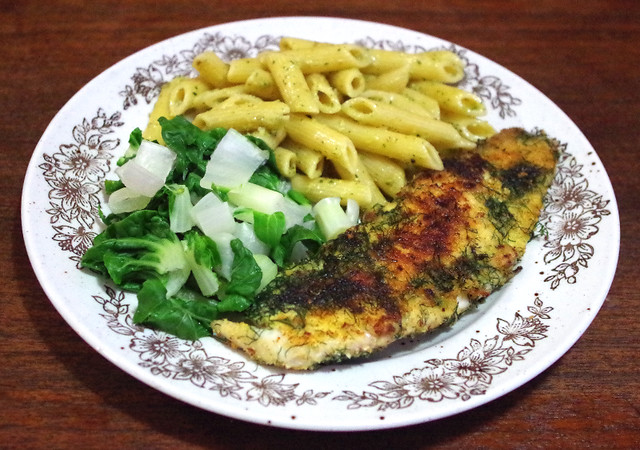 The dill bread recipe makes two loaves, and my family didn’t have a chance to finish it all before it started to go stale. I suppose we could have just toasted the last few slices, but instead I decided to leave them out overnight so they’d become properly hard. Then I put the slices into a plastic zipper bag and crushed the bread in the bag with a rolling pin to make fine bread crumbs. I had a bit of fresh dill left over that needed to be used, so I chopped that and added it to the bread crumbs. I then beat a couple of eggs, dipped the tilapia fillets in the egg, then dipped them into the bread crumb mixture, and fried it all lightly in a drizzle of olive oil in a nonstick pan. I served it with steamed bok choy and penne with pesto, and it was delicious. 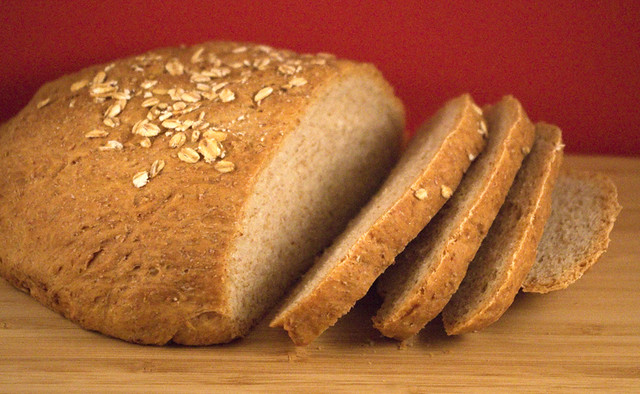 I liked the texture and heft of this bread; it was particularly good for sandwiches. However, this one too was lacking either salt or sugar to my taste, so I will have to adjust the recipe next time to see if that helps. 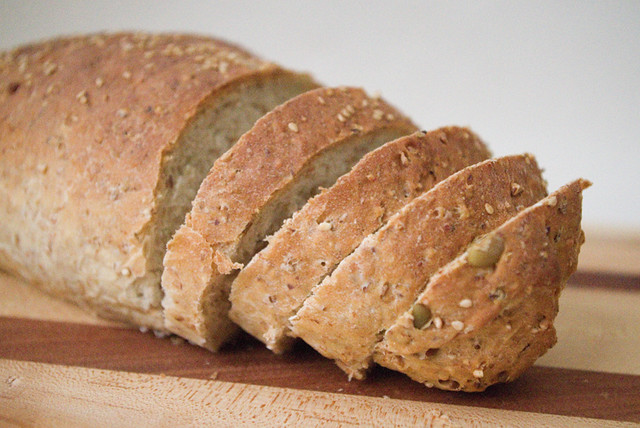 This loaf was full of all the seeds and heavier flour that I love in a breakfast bread, but I planned this bake very badly, as I couldn’t properly enjoy it after having just had dental work done that day. Even so, it was very tasty — I just had to be very careful how I chewed. I like that the grains/seeds can be varied to change the texture and flavour; the original recipe calls for sunflower, pumpkin, and sesame seeds (pepitas), but I would enjoy trying it with all of the interesting seeds that are available at the local bulk store. 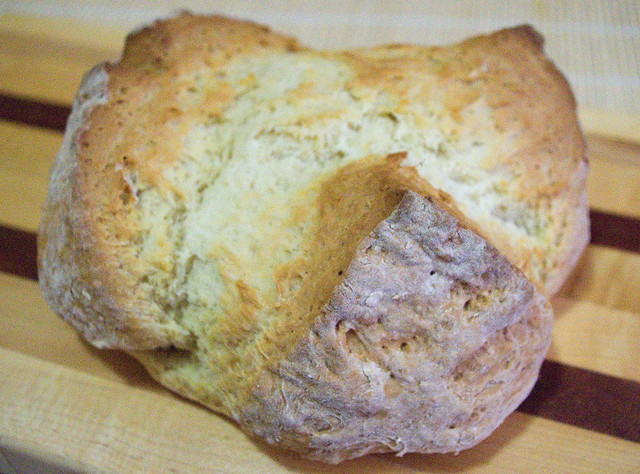 Wow, did I ever mess up this bread. I didn’t flatten it enough, so the center wasn’t cooked through. I cut the slashes too deep, so the bread opened up like a facehugger egg from Alien. And somehow I made a mistake with the mixing, so that instead of a nice, smooth crust, I ended up with something that strongly resembled cellulite. The flavour, for those parts that were cooked through, was quite nice, so I think I shall try it again with my newly-acquired knowledge of what not to do. 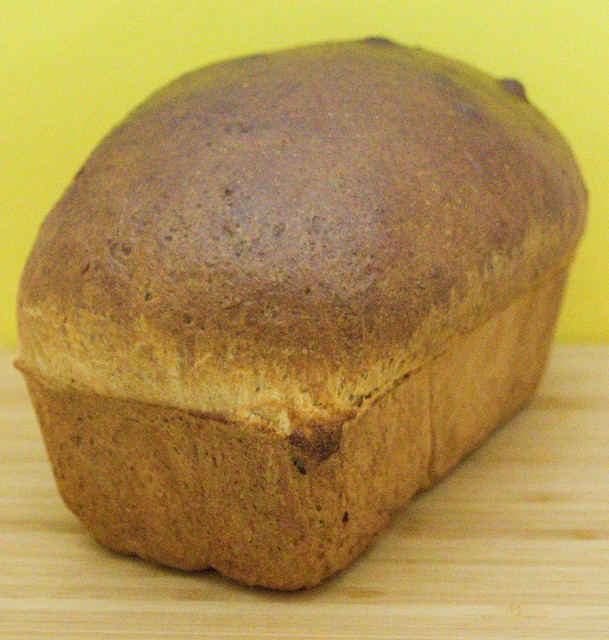 I was craving a simple whole wheat loaf, so I veered away from my quest to finish all the World Breads recipes. This recipe is from my trusty standby, the Joy of Cooking. The texture and flavour of the loaves was quite nice. However, I discovered that there is a typo in my copy, one that was corrected in the more recent digital edition (which I did finally break down and buy). At the start of the recipe, it says that it should yield three 9″x5″ loaves. Yet at the end of the recipe, it instructs the cook to “allow the dough to rise in a large oiled bowl until doubled, about 1 hour, and once in 2 greased 9 x 5-inch loaf pans until doubled, about 45 minutes”. Basically, it says that the recipe yields both two or three loaves, which is definitely an error. I flipped a coin and went with two loaves, and the end result was that the loaves were huge. I had to cook them for about 15 minutes longer than indicated so that they sounded hollow when I tapped the bottoms. Next time I’ll split it into three loaves — even though the digital version says to make two loaves as well.