Back in high school, before the Internet was really a thing and email had only just caught on, I had a pen pal from Japan. I would spend hours composing letters to her, trying desperately to form coherent sentences with an extraordinarily limited grasp of the Japanese language. Her letters, written for the most part in English, showed her struggle with a new language as well. Even so, we communicated fairly well without being able to rely on body language, tone of voice, or facial expression (if at a fairly low grade level). That is, until I mentioned chicken noodle soup.

My pen-pal wrote that she had been suffering through a cold, and I made an offhand comment in my reply along the lines of, “Make sure you have your chicken noodle soup!” Her reply was sheer confusion. These days she would have Googled it on her smartphone, but that wasn’t an option back then. What was so special about chicken noodle soup? 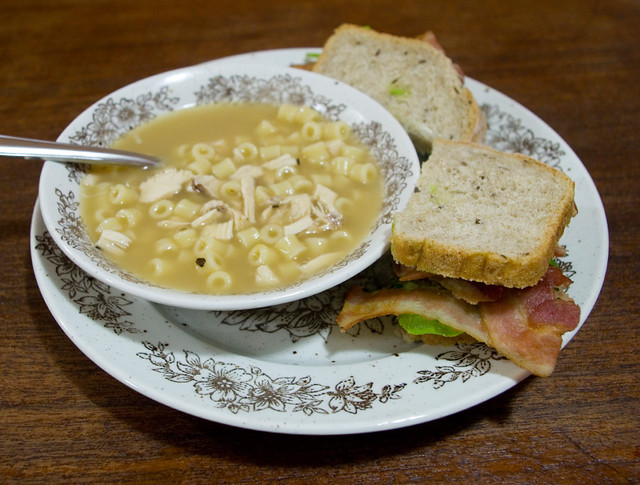 To be honest, the chicken noodle soup that I had when I was growing up wasn’t special at all. It came from a can if I was lucky; it would be plopped as a gelatinous tube of goo into a pot with a couple of cans of water, then stirred until smooth and heated until warmed through. If I was unlucky, or if we were camping, we had the dried soup mix instead. I have to admit that I didn’t really like either of these options, and it’s not because I don’t like instant soups. I use cream of mushroom soup in a number of recipes, and dried onion soup mix is a key ingredient in a great chip dip. I thought that I just didn’t like chicken noodle soup. (This didn’t stop me from having it when I was sick, though. Also being pampered by my mom, drinking flat ginger ale, burrowing under a pile of blankets on the couch to watch bad daytime TV, and draping my head with a towel then holding it over a bowl of hot water to let the steam clear my sinuses.) 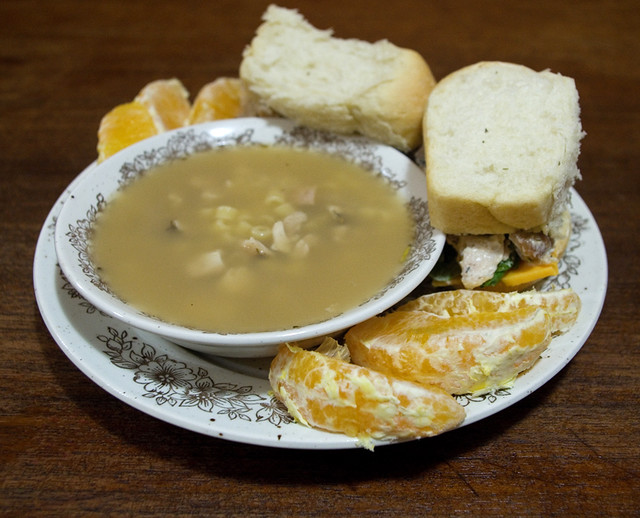 Chicken noodle soup made with ditalini noodles and a few more spices, with a chicken salad, cheddar cheese, and spinach sandwiches on homemade Nan’s Pan Rolls, and navel orange slices on the side.

Then, last week I had a crock pot full of chicken bones simmering away for broth, and I thought to myself, “Why not?” I had never made chicken noodle soup from scratch before. I knew that if I didn’t end up liking it, the rest of the family likes the canned version, so it probably wouldn’t go to waste. I followed the Chicken Noodle Soup recipe on page 125 of the Joy of Cooking (2006 edition). And you know what? I actually quite liked it. Homemade doesn’t taste much like the canned stuff at all.

I was happy enough with the recipe that I made soup and sandwiches again yesterday after having to pick my daughter up sick from school. The jury’s out on whether this soup has any true health benefits, but it’s warm and comforting and easy on the stomach, so it’s good to eat when you’re not feeling well. It’s not much more difficult to turn into a meal than the canned stuff, either — so long as you have some broth in the freezer (which I almost always do).

Did I ever properly explain the chicken noodle soup tradition to my Japanese pen pal? Knowing my grasp of the language, probably not. I did try. I even sent her a package of the dried stuff and gave my best shot at translating the directions. Should she ever come to Canada, I think I’d like her to try my homemade version. Then she might understand why, to many Canadians, chicken noodle soup is a true comfort food.