My quest to learn how to successfully prepare at least a few German dishes continues. It has been… Interesting. Lately I’ve met with more failure than success. 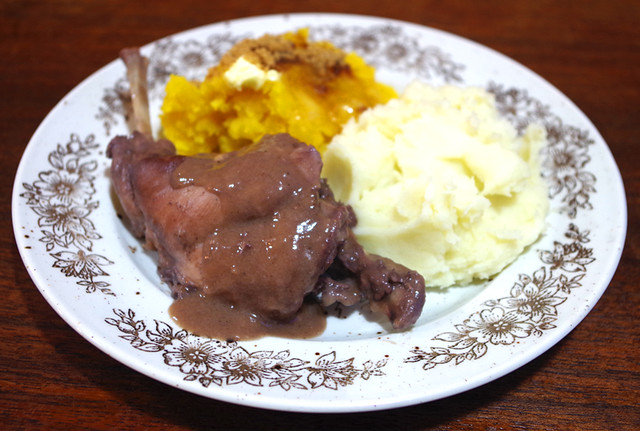 Hasenpfeffer served with mashed potatoes and acorn squash with butter and brown sugar.

Over March Break I made Hasenpfeffer (rabbit in wine gravy) from the recipe on page 60 of ‘Round the World Cooking Library: German Cooking by Arne Krüger (1973). It’s a fiddly dish, made all the more so by the fact that I’d never cooked rabbit before. I had eaten rabbit, but I distinctly remember it being gamier. Perhaps the one that I had before was wild-caught, where as the one I used was farm-reared? Whatever the reason, I was expecting more flavour from the meat. However, it was fall-off-the-bone tender and the sauce was quite nice. My only complaint was the saltiness: I double- and triple-checked the recipe, and it called for two tablespoons of salt. I know that when you follow a recipe for the first time you should follow it to the letter, but I should have let my good sense prevail and halved or quartered the salt.

Would I make it again? Only if the rabbit was on sale — it’s really expensive around here, and you don’t get much meat off of one animal. I think the red wine gravy (with less salt) might be nice on chicken or beef, though. It would definitely be worth trying. 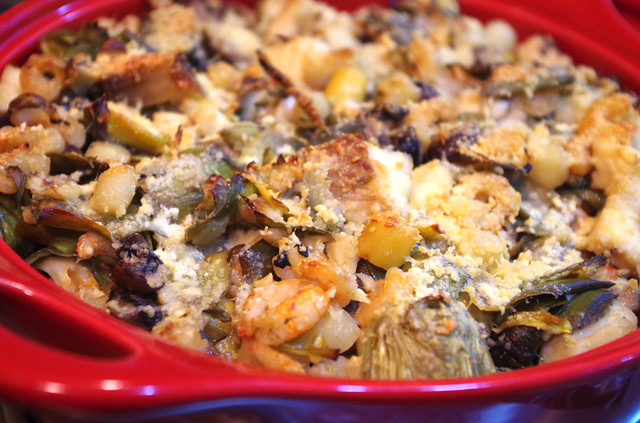 This weekend I tried Hamburger Kasserolle (‘Round the World Cooking Library: German Cooking, page 35), which did not go so well. Someone like me who doesn’t speak German may assume that this is a casserole with ground beef in it, but the “Hamburger” in this case means “from Hamburg” — so the protein is actually seafood. First of all, this is a 1970’s book, so like many from the era it calls for frozen or canned versions of at least half of the ingredients, and then adds some rice and a can of cream of mushroom soup. I chose to go with an equivalent amount of fresh ingredients (I really can’t stand canned mushrooms, for example), and I think that went well. This casserole also calls for a rather large amount of seafood, which was nice, but pretty pricey.

I think that the reason I really didn’t like the end product was the artichoke hearts. The recipe calls for them frozen, but I couldn’t find them frozen or canned at any of my local grocery stores. I opted to buy them fresh, but despite pre-cooking them in the microwave and then baking them for half an hour, the artichoke hearts were rubbery and gross. They squeaked between my teeth when I chewed. Not pleasant.

Would I make this one again, even if I got rid of the artichokes? Probably not. I can think of much better ways to prepare seafood, even frozen stuff, than by baking it in cream of mushroom soup. 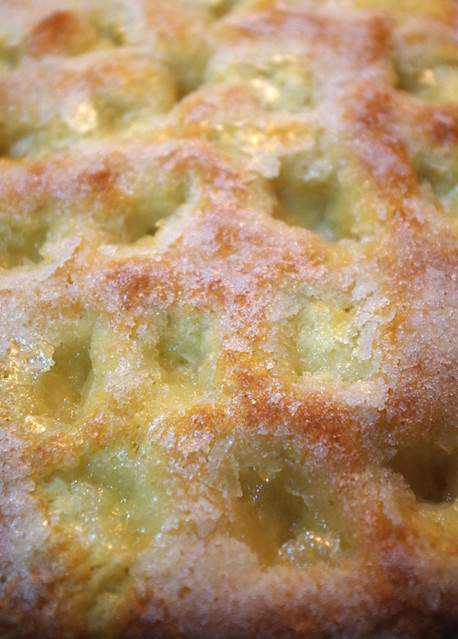 Last but not least, on Sunday I gave a shot at what I think was my first ever German sweet: Zuckerkuchen (sugar cake) from page 81 of Classic German Baking (2016). I took this book out of the library, but I’m starting to think that I may have to buy a copy of it for myself. Zucherkuchen is a yeasted cake, which is something I’ve never made before — every other cake I’ve made has been leavened with baking powder or soda. It’s a cake that is rich with butter and sugar, but not much else, so I can see how it would appeal to even the pickiest eaters, i.e. most children. It’s denser than most of the cakes I’ve had, somewhere between a cake and a square I think, and it’s cohesive enough that slices can be picked up and eaten with the hands. I was worried that I might not have got it right, but from the writeup in the book and descriptions online, I think I’m actually pretty close. 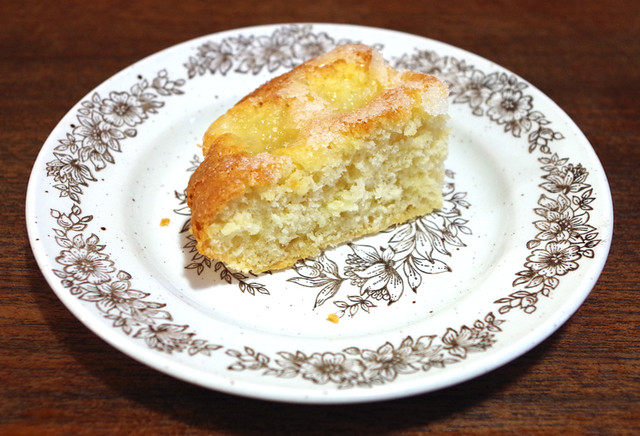 So would I make this recipe again? Most definitely. And I think my kids would want me to as well.