There is a lot of contention out there as to what makes a good shepherd’s pie. I distinctly remember an episode of Kitchen Nightmares where Gordon Ramsay laid into the chef because the restaurant’s shepherd’s pie contained beef instead of lamb. I didn’t actually discover that this dish is supposed to have lamb in it until about five years ago. Apparently “cottage pie” is what you call it when it’s made with beef. The dish that we called shepherd’s pie that I grew up with was always made with beef because my mother prefers it that way. I never thought to question it. 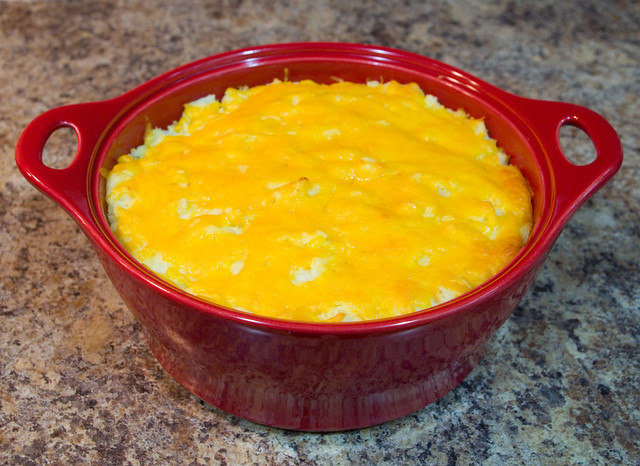 As the vegetable part of this casserole, I use corn (sweet corn, not maize), although I understand it is more traditional to use peas. I never made this dish for my British Nan, but at one time she refused to eat corn as it was “cattle feed” and believed it to be beneath her. Now, Nan lived more of her life in Canada than she did in England, so she may have relaxed her point of view somewhat, but I’ve heard this sentiment echoed by her visiting relatives. I don’t know if this is a wide-spread belief or one restricted to my family. At any rate, corn is not traditionally part of this dish.

Lastly, I structure my dish more as a casserole and less as an actual pie. Traditionally, the “crust” of the pie is supposed to be the mashed potatoes, but a quick Googling shows me that I’m not alone in putting the potatoes on top. 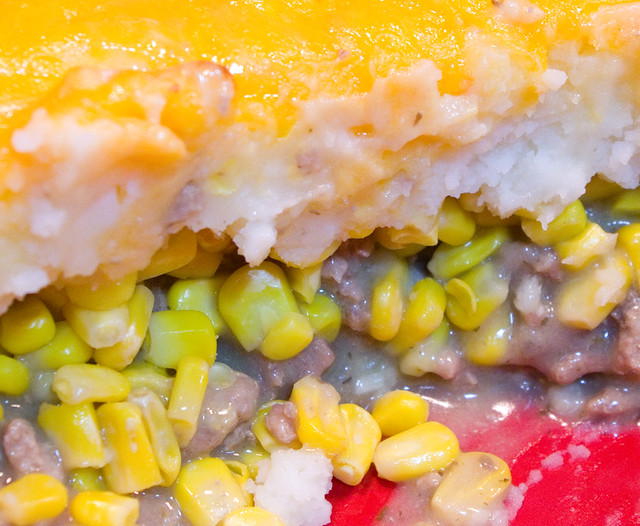 When the dish is served, you should be able to see the strata of meat & gravy, veggies, potato, and cheese.

Peel and cut into large chunks:
– 8-10 (about 1Kg (2.2lbs)) medium white-fleshed potatoes*
Place the potatoes into a large cooking pot. Fill pot with water until there is an inch covering the potatoes. Bring the pot to a boil, then turn it down to a simmer. Cook potatoes until they can easily be pierced with a fork.
While the potatoes are cooking, in a non-stick frying pan heat:
– 1 Tbsp olive oil
Add to the oil:
– 1 small yellow onion (yields about 100g (3.5oz))
– 2 cloves garlic**
Cook on medium heat until onions are translucent with light brown edges.
To the onion mixture, add:
– 700g ground lamb***
Turn up the heat to medium-high and cook the lamb until it is lightly browned, regularly draining the grease.
To the meat mixture, add:
– 1 can of cream of mushroom soup****
– 1 can of water
Stir until soup is smooth. Bring the mixture to a boil, then turn down the heat and simmer gently until soup has almost reduced back to its original canned consistency.
While the meat and gravy are simmering, drain the potatoes. To the potatoes add:
– 2 Tbsp butter or margarine
– 2 Tbsp 2% milk
Whip or mash the potatoes until smooth.
Preheat the oven to 350°F (175°C)
Spread the meat and gravy mixture evenly on the bottom of a casserole dish. On top of this, pour evenly:
– 2 cups frozen corn
Spread the mashed potatoes evenly on top of the frozen corn. On top of the potatoes, sprinkle:
– 1 to 1 1/2 cups loosely-packed grated cheddar cheese
Bake casserole at 350°F (175°C) for 25 to 30 minutes, or until cheese is melted and sauce bubbles up around the edges of the potatoes.
Serve with a side of steamed vegetables, if desired. 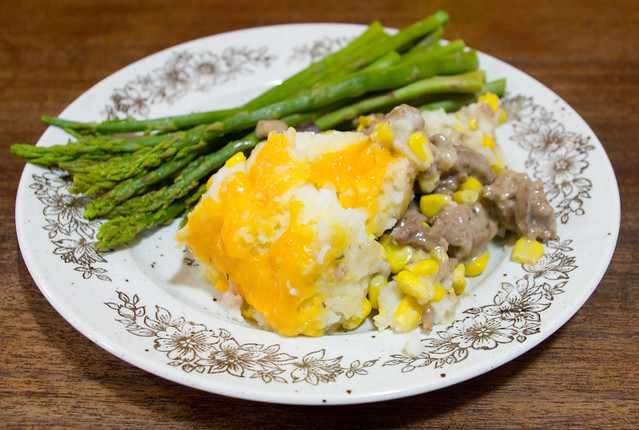 It’s difficult to scoop portions that don’t fall apart if you bake this dish in a round casserole. If you want perfectly rectangular servings, bake it in a rectangular dish and serve in slices.

*This dish works really well with leftover mashed potatoes, so if you have enough left over from a previous meal, skip the potato preparation steps. If the potatoes are cold, a slightly longer cooking time may be in order.
**1 tsp garlic powder may be substituted for garlic cloves; however, the powder should be sprinkled over the ground meat instead of cooked with the onions.
***Meat may instead be 50%/50% ground lamb/ground beef, ground lamb/ground chicken, ground lamb/ground turkey, or any one of these meats by itself. Keep in mind that without any lamb, the flavour will not be nearly as strong.
****I like Campbell’s Cream of Cremini & Shiitake Mushroom, but any cream of mushroom soup will do. If you are averse to the texture of mushrooms in your food, run the cream of mushroom soup and water through a blender until smooth before adding them to the meat.