The Great Glebe Garage Sale is a Big Deal in Ottawa. A community garage sale may not seem like an exceptional event, but it is huge and densely packed with buyers and sellers alike. The roads are thronged with people, strollers, bicycles, and parked cars. Driving in the area — which is usually a fairly quiet residential area — is inadvisable; if you’re going to park in the area, plan to show up at the crack of dawn to get a spot. Even people who don’t go to garage sales as a general rule will make a day of hitting this one.

Panorama taken to give an idea of the crowds; click to enlarge. Please ignore how some people are visually chopped up, as everyone was moving and my camera objected. Taken from just north of Glebe Ave. and Lyon St. South. 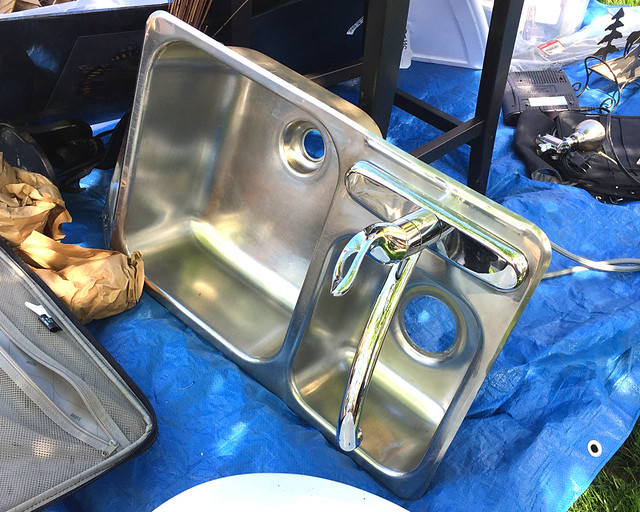 I found somebody selling everything including the kitchen sink.

For those unfamiliar with the area, the Glebe is one of the older and wealthier areas of downtown Ottawa. It is bordered by the Queensway (a.k.a. the Trans-Canada Highway) to the north, the Rideau Canal to the east and south, and Bronson Avenue to the west. The residential streets are lined with huge hundred-year-old houses, and are shaded by equally-old trees. 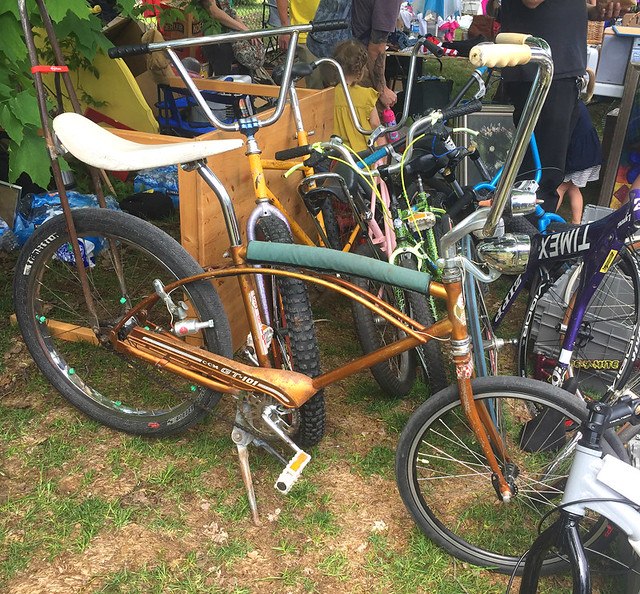 I spotted this CCM GT-101 bicycle in a hodgepodge of bikes in front of the Glebe Collegiate. I think it would have fit right in in Stranger Things — it even still had its headlamp. Except that CCM is a Canadian company, and Stranger Things is set in Indiana, I guess. 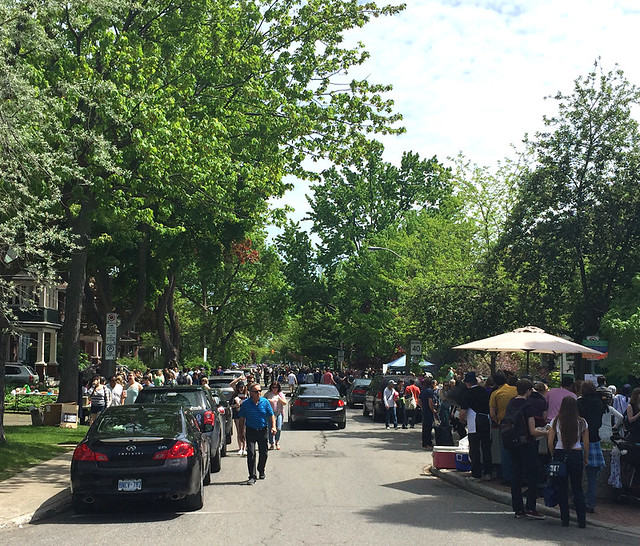 The Glebe Community Association schedules and runs the Sale, which has been held on the fourth Saturday in May, rain or shine, since 1986. Sellers are expected to donate a portion the day’s proceeds to the Ottawa Food Bank. The goal for this year was to raise $12,000, which is in addition to all of the other fundraising events that take advantage of the crowds. For example, every year I have attended there has been a scout troupe selling hot dogs and cold drinks in front of St. James United Church, and they do a brisk business. Some groups pool all their resources and run a larger sale from inside a community center or church, although some such fundraisers are held in volunteers’ driveways and front yards. 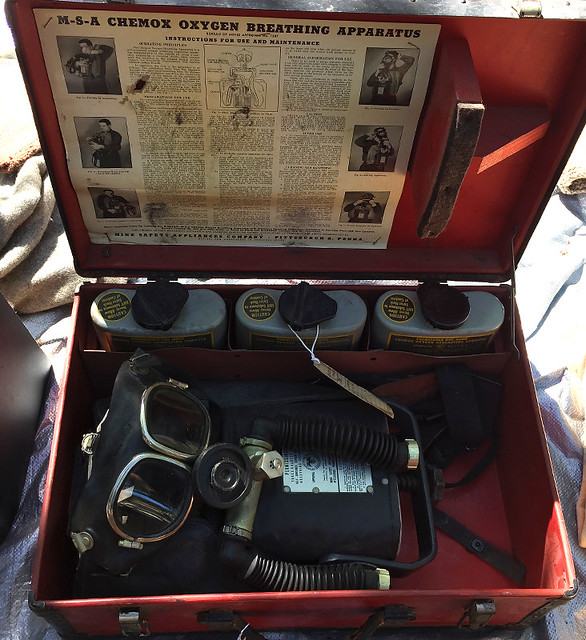 This was the thing that I wanted the most at the entire garage sale, but at an asking price of $175 it was much too dear for my budget, especially since I didn’t need to use it for anything, I just liked it. It’s an M-S-A Chemox Oxygen Breathing Apparatus — a rebreather (probably for firefighting), most likely from the 1950’s. 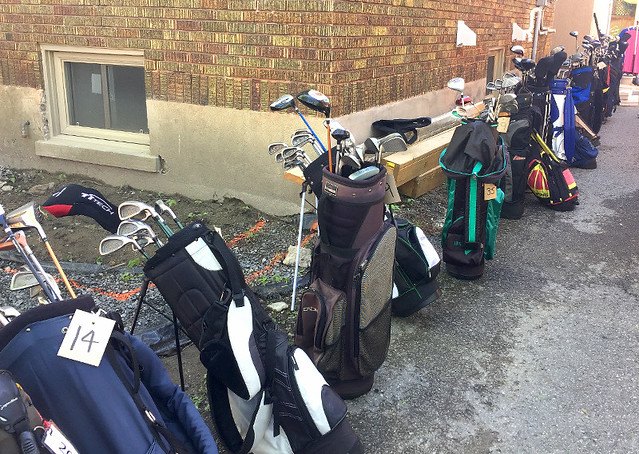 Both sides of this driveway were lined with golf bags; there were literally so many that I couldn’t get far enough away to get them all in one shot.

I have been attending the Great Glebe Garage Sale for at least fifteen years now, and my success in finding things to buy has been variable. Some years I don’t find a darned thing; other years I have to walk back to my car (usually parked outside the Glebe but within relatively easy walking distance) four or five times to drop things off because my bag(s) have become too heavy. But I find it fun to go whether or not I discover any treasures. Half of the thrill is of the hunt, but there’s also a lot of fun to be had people-watching (spotted a man carrying a live parrot on his shoulder this year), listening to music (there seems to be a busker or a DJ set up on every block), and eating (every fundraiser going is selling food on the street, alongside every style of food truck in town). 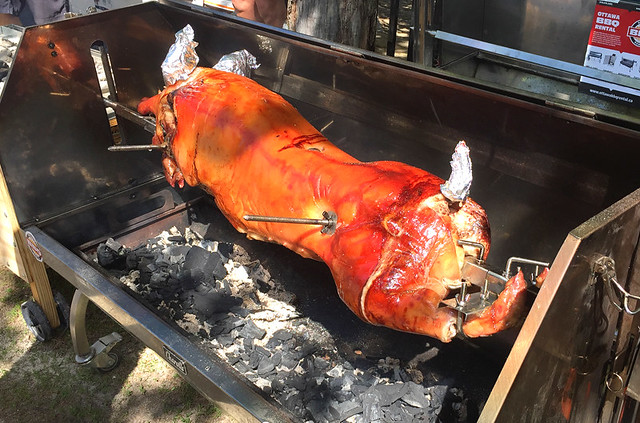 A whole pig being spit-roasted for pork sandwiches to be sold at lunch. It smelled divine. 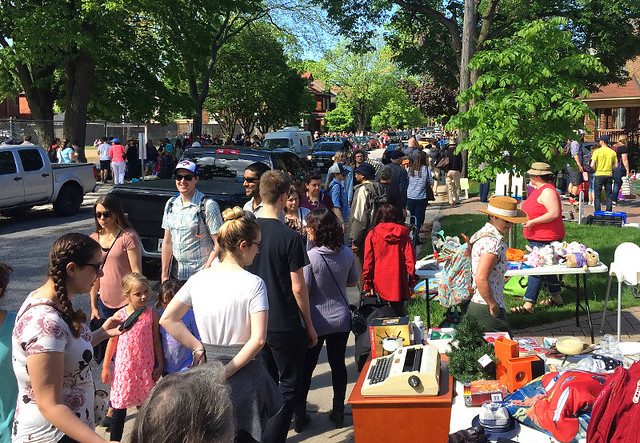 The crowds on Third Ave.

If you’ve never been to the Great Glebe Garage Sale, and you’re in town on the fourth Saturday in May, I highly recommend that you go. Especially if you’re into anything that can be difficult to find — you might just get lucky!