At the suggestion of a friend of mine, I bought some red quinoa a while back included a small portion in a fruit salad. Well, I discovered very quickly that I don’t like it with fruit; actually, despite all of the hype and how healthy it is, I don’t care for it much at all. Use it instead of rice! Add it to your salads! Yuck, yuck, yuck. But I still had most of a bag of quinoa to use up, and I would be darned if I was just going to compost it, so I decided that I’d try making quinoa bread. And it ended up being delicious! Not just to me, either. My kids ask for seconds and my husband, who generally loathes quinoa with the fire of a thousand dying suns, actually likes it. So even if you’re not a fan of this ancient grain, I suggest that you try this bread — and don’t write off all baked goods containing quinoa (like I almost did) until you try them.

This is a heavier bread, with a density a little closer to a banana or pumpkin bread than a traditional white or whole wheat loaf. The flip side of the heaviness — mostly caused by the water in the grains — is that this bread stays moist and tender inside for quite a long time. Even when stale, it doesn’t get hard like a crusty bread can, and can still be quite good toasted or in a grilled cheese sandwich. 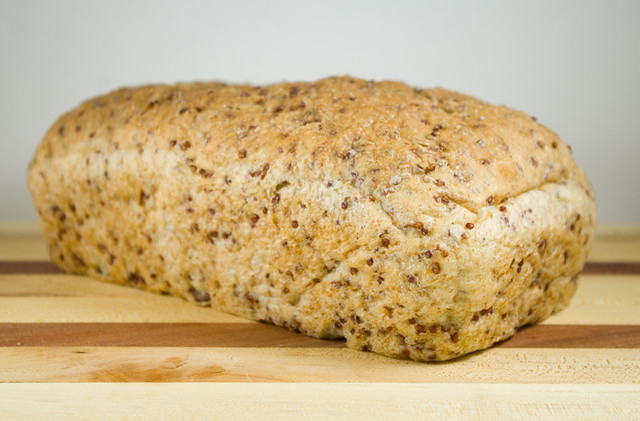 In a large pot, bring to a boil:
– 500mL water
– 1 Tbsp canola oil
– 1 tsp salt
To the boiling liquid, add:
– 1 cup red quinoa*
Bring back to a boil. Turn heat down to low and cook for 20 to 25 minutes, uncovered. When cooked, the quinoa will become transparent and a white ring will appear in the ancient grain. Remove from heat, drain, and allow to cool.
In a large bowl, mix together:
– 2 1/2 cups all-purpose whole wheat flour
– 1 1/2 tsp salt
– 14g (2 packages) quick rise instant yeast
Stir in:
– 2 1/2 cups warm water
Once contents of bowl are mostly smooth (it doesn’t have to be perfect), add the cooked, cooled quinoa. Stir until mixed.
Gradually add:
– 4 cups all-purpose unbleached white flour 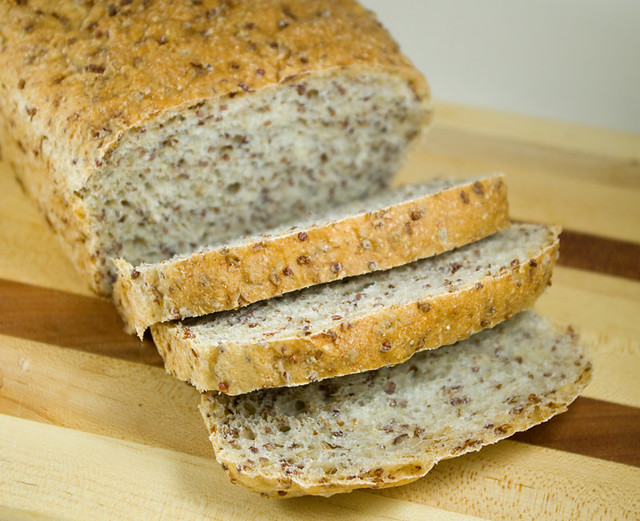 Depending on how much water the quinoa absorbs when cooking, slightly more or less white flour will be required. The dough should be soft and the slightest bit sticky, but should not flow like a batter.

Turn out dough onto a lightly floured surface and knead by hand for about 10 minutes, dusting kneading surface, hands, and dough lightly when necessary to prevent sticking.

Oil a large mixing bowl. Form the dough into a ball and place it in the bowl. Cover the bowl with a clean, damp tea towel. Place the bowl in a warm, dry area with no drafts. Allow the dough to rise until double, about 1 1/2 to 2 hours.

Punch down the dough. Grease three 8.5″x4.5″ loaf tins. Divide the dough into two equal-sized portions. Cover the pans with a clean, damp tea towel and allow to rise again until double, about 1 1/2 to 2 hours.

Preheat oven to 400ºF (205ºC). Bake loaves for 10 minutes. Turn heat down to 350ºF (177ºC) and bake for about 20 to 25 minutes more. Check to see if the bread is done by removing a loaf from the pan and tapping it on the bottom. When cooked through, it should make a hollow sound. Remove all loaves from the pans immediately and place them on a wire cooling rack.

Slice and serve immediately, or wrap in a clean plastic bag once loaves are cool; they will last about five days before going stale.

*Any colour quinoa may be used, but red quinoa makes the most attractive visual contrast in the loaf.

One thought on “Quinoa Bread Recipe”