Now that I live in a house with a proper yard, I’ve decided to try to grow some of my own food. I don’t think it saves me any money (especially the first few years, with all the set-up and trial and error), but I am proud of the food that I grow, and I know it’s as fresh as can be. I’ve never been one for taking care of purely ornamental plants, but I wish I’d started at least with basic herb pots years earlier — those things are very difficult to kill, and the fresh flavour is unparalleled.

One of the things I’m cultivating, since I do have the room and I do like shade, is fruit trees. Until a few days ago they were all in bloom, hopefully meaning that I’ll have a decent fruit yield this year. I know that flowers don’t mean that I’ll necessarily get any edible fruit, but without blossoms I definitely won’t get anything. 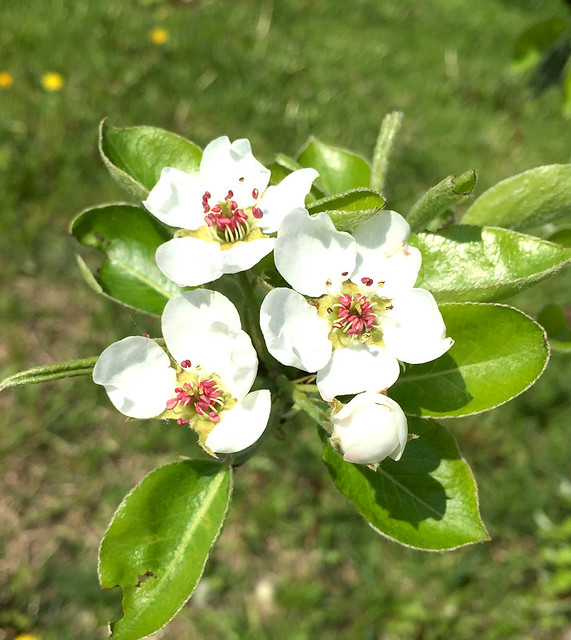 The first tree to bloom was my pear tree, which I planted only three years ago — and this was the first time there were any flowers! It’s what I like to call my “mutant tree”, because it’s actually four kinds of pear grafted onto a single tree (it used to be five, but one branch died). Only two of the four main branches bloomed this year, but who knows if the maturity rate of all of the kinds of pears is the same? The rest of the branches are still alive, at any rate. I didn’t do the right kind of research before I planted this tree, because the blossoms do not smell very nice — which is apparently pretty common. Ah well, they don’t flower for very long, and it will be a number of years before there are enough blossoms to perfume the air; the tree is still shorter than me. The odor also isn’t very intense, since right now I have to stick my nose almost touching to smell anything at all. 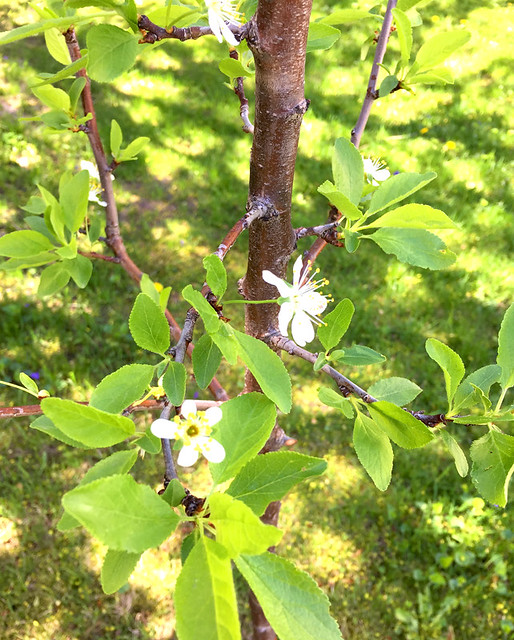 I was thrilled that my plum tree flowered as well; I only planted it early last year, and it didn’t flower then — and then Japanese beetles ate all of the leaves. I honestly didn’t think the poor tree would survive the winter. We shall see if the beetles return this year! They’re not quite in season yet. I would be happy if I never saw another one, to be honest. They are persistent pests that can decimate a garden, although the only plant they were interested in that I planted last year was my plum tree. 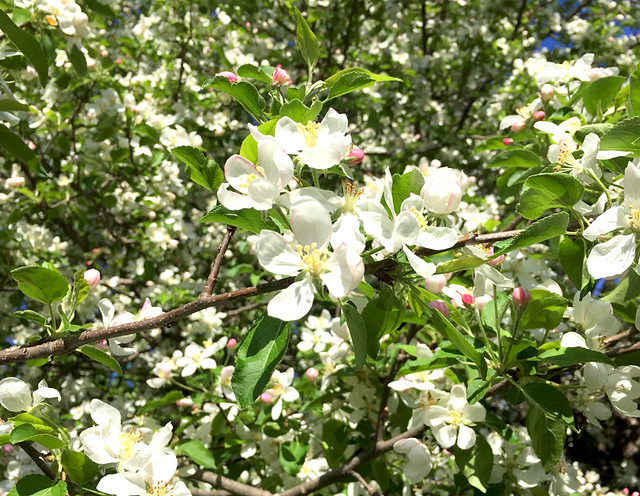 The tree that I was least surprised to see flower this year was my apple tree. It came with the house, and it was probably planted about thirty years ago, when the neighborhood was new. I’m not entirely sure what kind of apple tree it is; the fruit is yellow-green when ripe, and ripens late into September, much later than a lot of the farmed apples around here. This indicates to me that it’s some kind of wild apple crossbreed (there are lots of those), or possibly a (or partly a) Russian Antonovka tree. It also seems to flower only every second year, and this is a boom year. 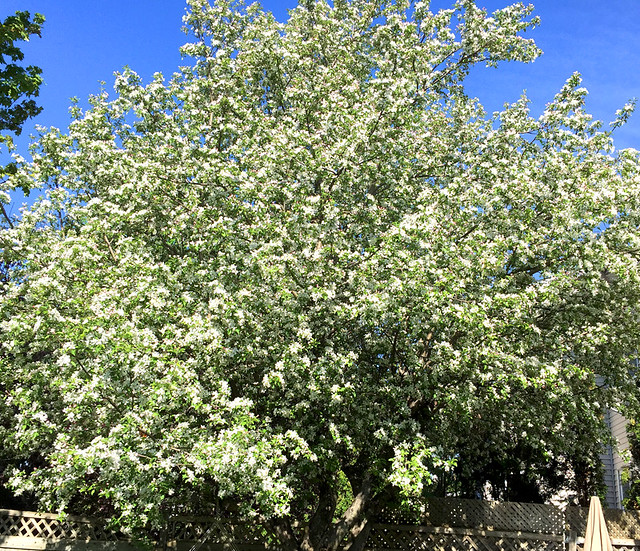 This tree was very unhealthy when we first moved in. There were lots of dead branches, the apples all had apple scab… But I’ve trimmed back the dead wood, and (hopefully) taken care of the root of the apple scab. Last time this tree bloomed, it produced hundreds of pounds of fruit. It’s even healthier now, so I expect the yield will be even greater — especially if the sheer number of flowers is any indication.