As part of my commitment to growing at least some of my own food (because heaven knows I can’t grow enough food to feed a family of four on the amount of land we own), I’ve planted a vegetable garden in my back yard. It’s been a bit of an exercise in trial and error, because I never had a successful garden of any kind before. Until the last few years, I didn’t have the land — but I also didn’t have enough interest. I can’t pinpoint a particular event that changed my point of view, but I think it has been a gradual thing. That being said, my house didn’t come with a conveniently prepared garden plot, so it ended up being being both a mental and physical commitment to working outdoors.

I scoured my old photos for a picture of my old deck, but I hated it so much that it’s not in very many of them. The deck came with the house, and it was very poorly built — and then they painted it with interior paint, which of course didn’t last and led to it rotting out even quicker than it would have in the first place. However, we couldn’t afford to replace the deck right away, so we kept it as long as possible. The plan is to put in a small patio by the patio door sometime in the next year or two beside the garden, since what’s currently there is clay — otherwise known as very slippery mud when it rains.

However, after last year’s spring thaw, my husband and I started stepping through rotten boards on the old deck. That was the last straw for me, so I started taking the old deck apart. It was worse than I thought; the deck had been directly attached to the house wall and siding had been removed to do so. This meant that there was rot that had to be removed, new boards put in, and new siding put up. Also, the basement window under the deck had never been finished properly on the outside.

It was great to get all the boards out, but then I had to take out all of the concrete supports, which I could barely lift and definitely couldn’t carry. I ended up using a trolley to do the lifting and lugging. I also had to remove a huge random chunk of concrete that had been hidden under the deck. It was almost three feet long and a foot and a half wide, and weighed more than I did. That was a fun exercise of digging and lever use to get it out of the ground. Not only that, but it served no purpose that I could see, since there were no holes in the top where something had once been mounted.

Then I fixed up the wall of the house, and my husband helped me clear the sod where I wanted the garden to be. It was ridiculously difficult to get even the small amount of sod out that I needed for the size of garden I wanted. The seed had been planted directly in the local clay, and that stuff, when dry, is really, really hard.

I lugged in probably 2,000 liters of soil for the garden all by hand. Otherwise, nothing would grow in my garden except weeds. The soil is so poor out here. I also added a copious quantity of sheep manure compost.

I added a plastic border around the garden and planted it for the season. 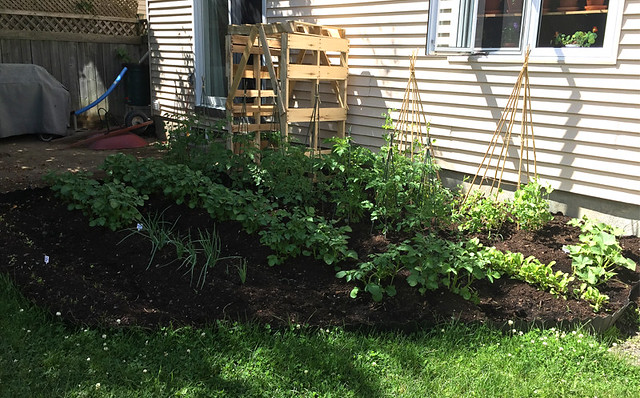 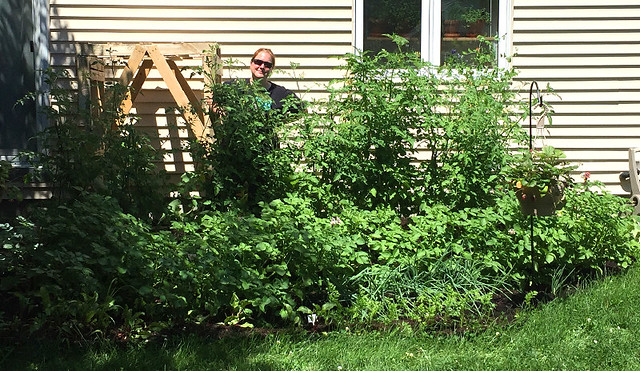 I mean, it grew REALLY, really well. (I’m in the photo for scale.)

Then of course came the harvest, and then winter… By spring, the snow had collapsed my garden border, and the spring rains (which were pretty severe here, even where there was no flooding) started washing out my garden soil. Ambitious weeds started taking root before the planting season began.

Last week I built a cedar border around the garden to hold the soil.

Last year my root veggies were short and stubby, and started poking above the surface of the garden instead of growing down because they were thwarted by the hard clay under the garden soil. So this week I lugged in another 1,500L of garden soil to build up the garden, as well as another 350L of sheep manure fertilizer.

Then I planted the garden. It’s been rainy enough that I haven’t had to water it myself yet. I hope that we don’t get so much rain this year that it destroys crops. Although the way things are going right now, that is a distinct possibility. I have my fingers crossed.