Last night I wanted to make a healthy and easy meal, so I went back to the Thai Coconut Curry Recipe and worked with what I had in the fridge and pantry. I used Blue Dragon Thai Red Curry Paste again, since I still had about 2/3 of a jar left in the fridge. As protein, I used chicken thighs, which I had bought in quantity a few days before due to a fantastic deal at the grocery store. For the veggies I used yellow zucchini, green zucchini, and garlic scapes, all of which are in season locally. Like with my Indian coconut curry (which in retrospect this version of the dish looks an awful lot like), I was running short on time, so I cooked the veggies on the stove. I also served it on rice. 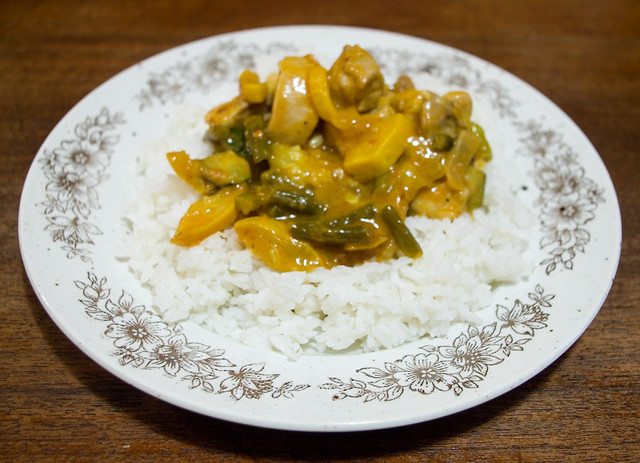 The dish was very tasty, and my whole family ate it, which satisfies my most stringent criteria when it comes to cooking. Also, anything with that many veggies incorporated into it is better for both the health and the digestion. However, I think if I want a more attractively-coloured final product, I’ll have to make the time to roast the veggies. They seem to keep their original colour much better when roasted. Also, chicken and rice aren’t nearly as visually appealing on a plate as shrimp and egg noodles. Even so, this meal remains very versatile and super-easy to make, so I’ll probably keep making it regularly — with infinite variations, of course.