Yesterday’s supper was very simple and was also completely based on what I found on sale at the grocery store over the weekend. A decent steak was on sale for less than the going rate for ground beef, so we had steak. Corn on the cob was only $0.15 per ear, so we had corn. Peaches and strawberries are in season and I had a few too many in my fridge, so I made pie for dessert. 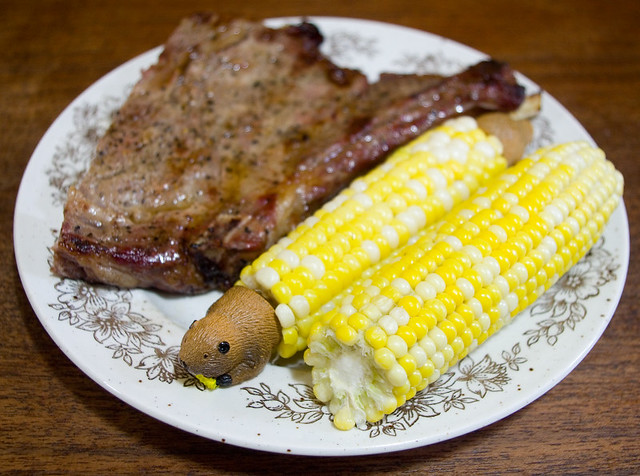 Since I was busy making the pies indoors, my husband cooked the steaks (with a sprinkle of Montreal steak spice) and the corn (still in its husk) on the barbecue. The steak was melt-in-your-mouth tender, and the corn, while not the sweetest, was still tasty. In retrospect, the steaks were a little large. Okay, they were huge. I cut off about a third of mine to give to Thing 1, and my husband shared his with Thing 2, and we still were stuffed before we got to the corn. That’s okay, we had the corn as a night snack, along with some pie. 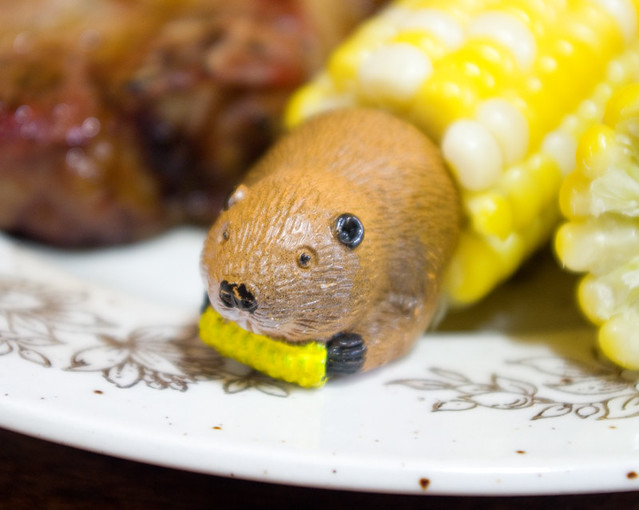 If you’re wondering what the brown lumps are at the end of my corn cobs, they are corn holders shaped like beavers eating corn. I thought that they were cute in the store, but they aren’t dishwasher safe so I wasn’t going to buy them. Surprisingly, it was my husband who fell in love with them and insisted that we bring them home (on my condition that he can hand-wash them if he likes them so much). 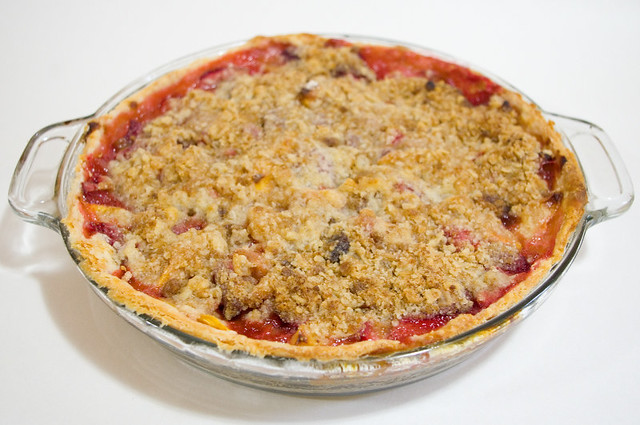 The pie was peach and strawberry with streusel topping, which was still warm and gooey from the oven when we cut into it. As usual, I used the Purity Pastry crust from page 73 of the Purity Cookbook (2001 edition), which remains my favourite. For the filling, I used the fresh fruit pie formula on page 228 of The Canadian Living Cookbook by Carol Ferguson (1987), and the streusel topping recipe on page 226. I cut the sugar back by a third, since I like the flavour of my pies to have a stronger emphasis on the the fruit flavour instead of the sweetness. To be honest, what I’d really wanted to make was plain peach streusel pie, as it is recommended in the meal planning section of the book as part of a typical Ontario country-style feast. However, I didn’t quite have enough peaches, and I did have some strawberries that needed eating, so I improvised.