I love both cooking with and eating carrots, so I’ve been planting them in my garden for a couple of years. I haven’t had great success, though. Last year, one of my carrots looked like this: 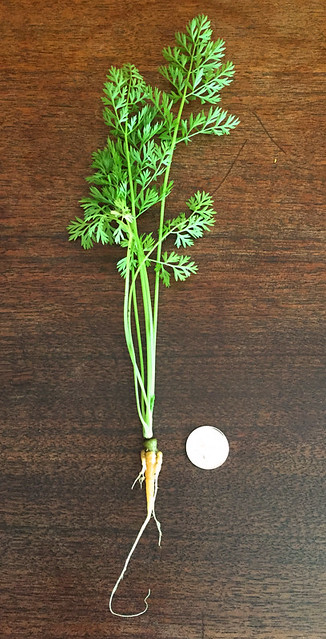 (That’s a dime for size reference.)

So when I planted my carrots this year, I didn’t have any great expectations. Instead of growing them from seeds like I’d tried in previous years, I bought pre-started seedlings from Laporte Gardens. I hoped I’d get a few decent-sized carrots and probably some finger-sized ones as well. Little did I know that I was growing MONSTERS. 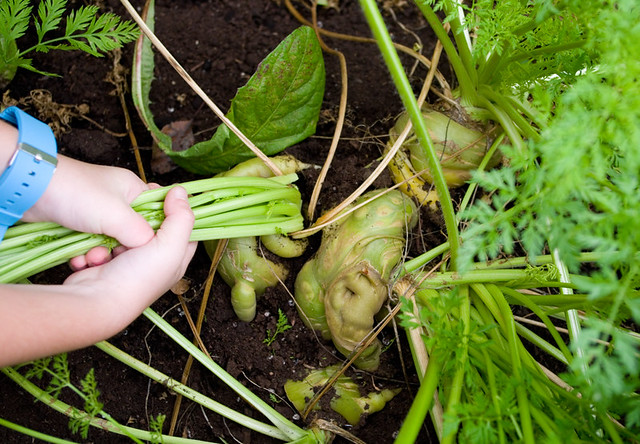 Thing 1 helping me harvest the carrots.

I left lots of space between each planted seedling (so I never had to thin them), made sure they got lots of water (not a problem this year) and that they weren’t being eaten alive by pests or crowded out by weeds. I also fertilized the entire garden with sheep manure compost early in the spring. And that was all I did. I’d learned the hard way that you really just have to leave root vegetables alone for as long as possible so that they develop fully. Um… Mission accomplished, I guess?

(Yes, I know now that I probably should have re-buried the carrots as they began to poke out of the ground so they didn’t discolor, but I didn’t know that back when it mattered. My carrots have never before grown so large.) 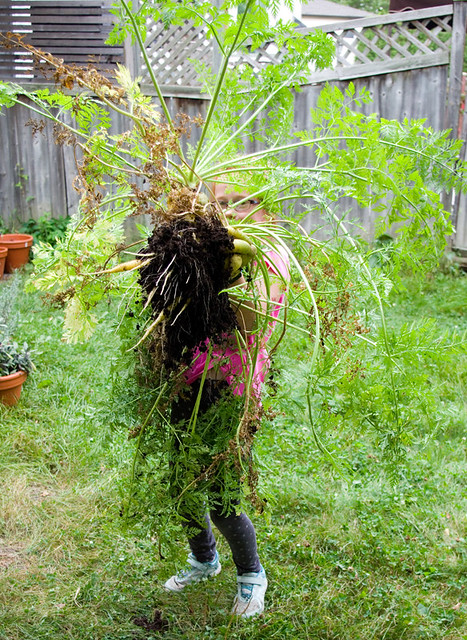 So yeah, that’s Thing 1 holding up one of the carrots/carrot clusters that she pulled up for me. It’s almost as big as her head. 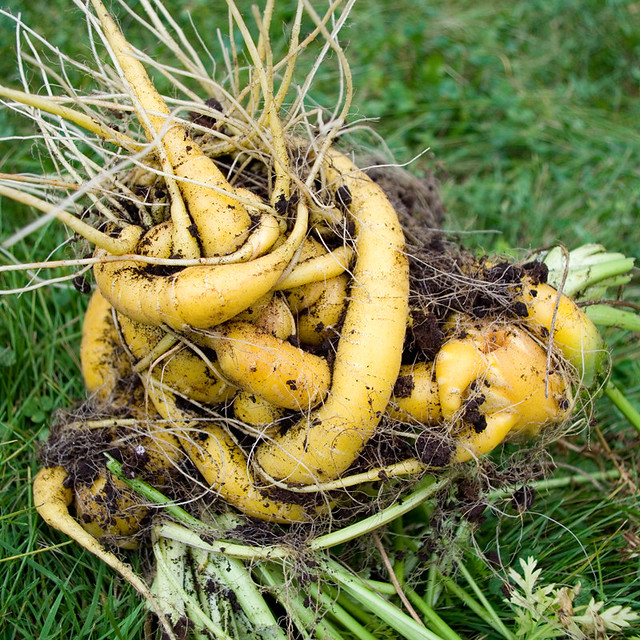 Instead of the roots growing long and straight, they looped back upon themselves multiple times, creating gnarled, mutant bunches. Even in the spots where there was only one top, the roots looked like this.

These are creampak carrots, by the way. They’re supposed to be yellow instead of the more common orange. 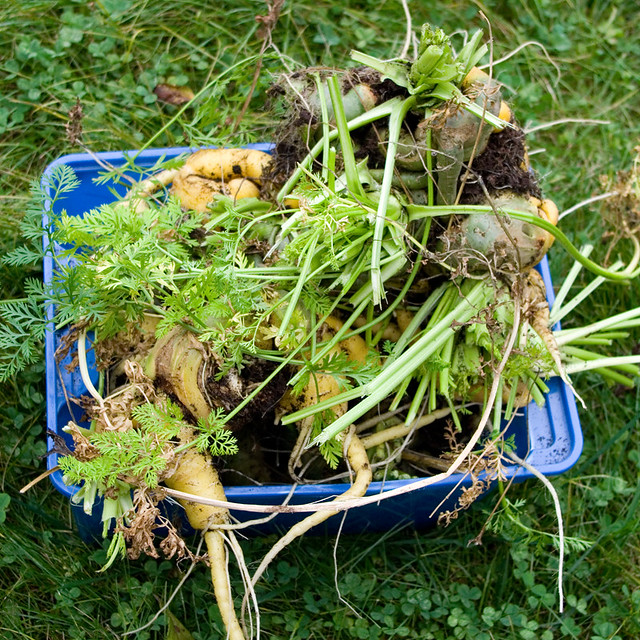 All in all, my small planting of carrots yielded a root harvest that overfills a 11″ x 15″ x 7¾” IKEA GLES box. 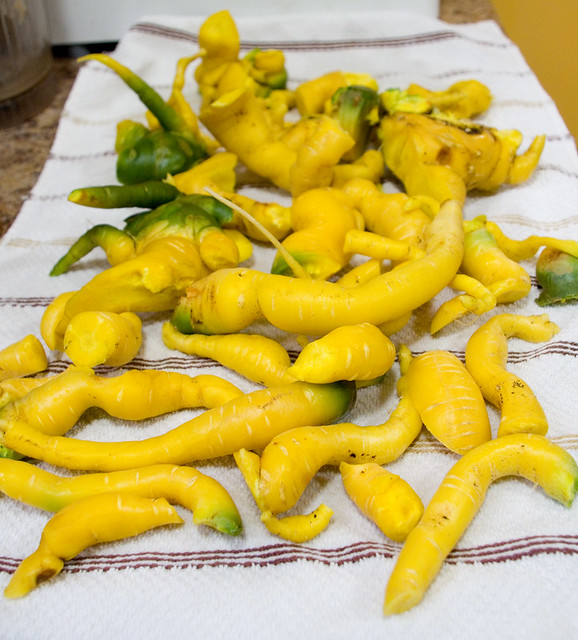 Washed and untangled, the carrots looked more like the vegetables I’m used to. The photo above is of only one of the root balls. I kept giggling as I washed and separated, since it all seemed so absurd to me. This is honestly the funniest plant I have ever grown… And I have grown some weird-looking plants. 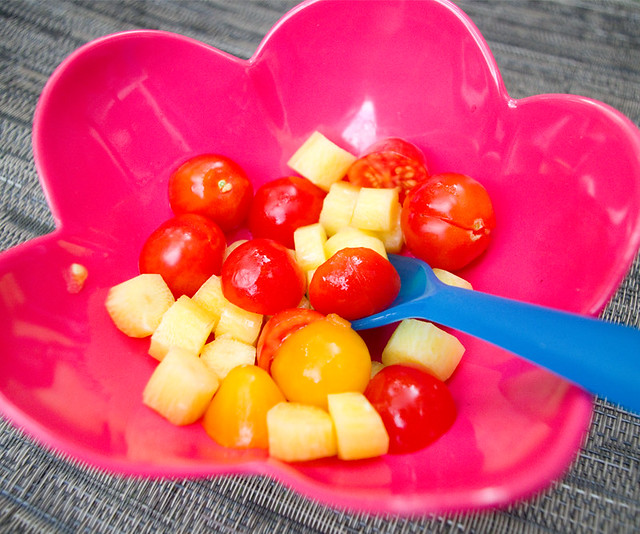 Thing 1 washed and cut up some of the smaller bits, then harvested a few cherry tomatoes from the garden to make her own carrot and tomato salad. I was very proud of her for taking the initiative to make a dish out of the food she’d helped harvest. She insisted that I photograph her creation and put it on “the blog”. 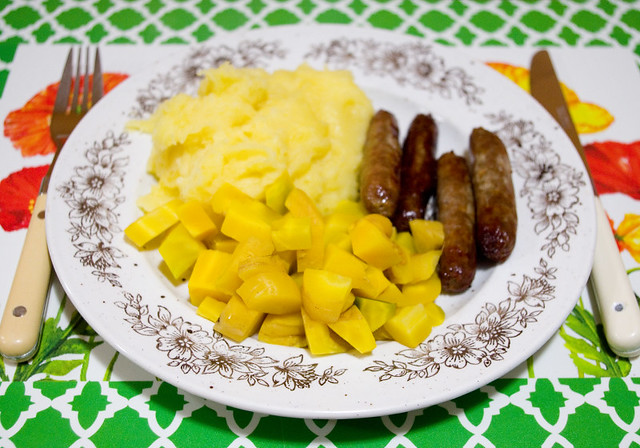 I included part of the harvest in yesterday’s dinner, which was steamed carrots, whipped potatoes (which are Prince of Orange potatoes and almost the same colour as the Creampak carrots when cooked), and maple & cinnamon sausages. After spending the afternoon in the garden, the whole family cleaned their plates.

One thought on “Carrots”