Although today is technically Thanksgiving here in Canada, my family celebrated yesterday. I know that a lot of other people I know hereabouts do the same. Having Thanksgiving dinner on Sunday combines the tradition of a Sunday family dinner with the practical consideration of a stat holiday on the Monday. This means that out-of-town guests can travel in on the Friday night or Saturday, then go back home on the Monday, i.e. no traveling the day of celebrations and no need for most to miss any work.

Here in Canada, Thanksgiving is mostly a secular harvest festival, although some religions do incorporate thanks for a bountiful harvest into their liturgical calendar. Unlike Americans, we don’t have a tradition of the First Thanksgiving (our history is markedly different than our southern neighbours, with our first European settlers being predominantly explorers, hunters, and trappers). We also celebrate this holiday much earlier, i.e. the second Monday in October instead of the fourth Thursday in November. We used to celebrate Thanksgiving later in the season, but the earlier date keeps it from conflicting with Remembrance Day (November 11th) and, on a practical note about climate, is also when the bulk of the harvest has been brought in this far (and farther) north. Heck, the Prairies often see snow as early as September. 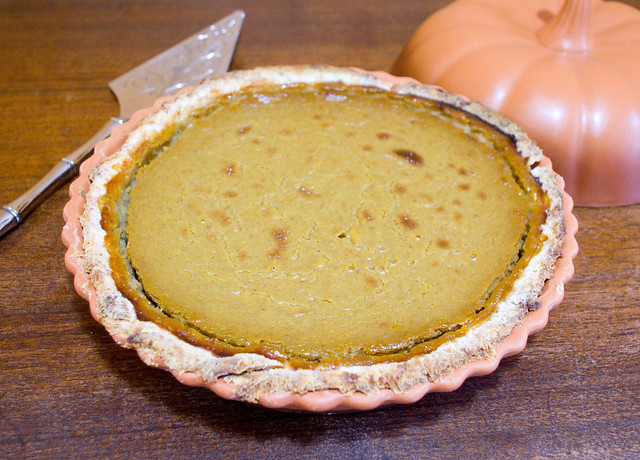 I started cooking the dishes that I was going to bring to Thanksgiving dinner on Saturday. I began with pumpkin pie, which was a combination of the Purity Pastry crust from page 73 of the Purity Cookbook (Elizabeth Driver, 2001 edition) and the Pumpkin or Squash Pie filling on page 686 of the Joy of Cooking (Irma S. Rombauer & Marion Rombauer Becker & Ethan Becker, 2006 edition). The filling pulled away from the crust since I had to store the pie in the refrigerator overnight, but it still tasted just fine. Due to food sensitivities in the family, I substituted coconut milk for the heavy cream/evaporated milk specified in the filling recipe. I have done this for years now, and I find that it tastes almost identical to using cow’s milk. That being said, I’ve learned that it takes much longer for the filling to set this way. To compensate, I don’t glaze the crust, as it causes it to burn over the long cooking time. Also, I put the pie plate on a baking sheet when I put it in the oven (something I do when making any type of pie), which both helps protect the bottom crust from burning and keeps any filling overflow from burning onto the bottom of my oven. 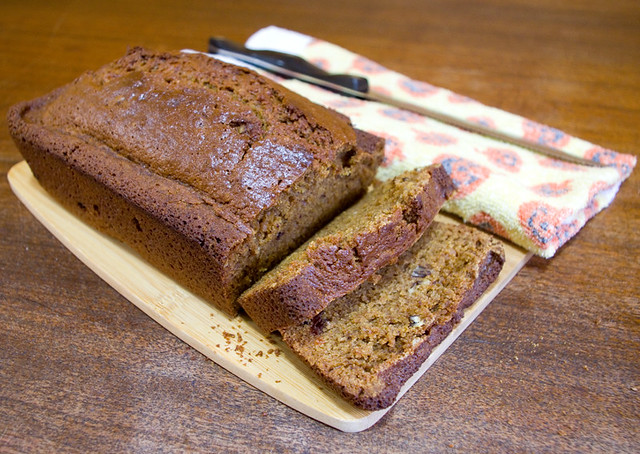 I cooked a small pumpkin to make the pumpkin pie instead of using canned (I like the flavour better that way), and I had some leftovers squash puree that needed to be used up, so I made Pumpkin Bread (page 628, Joy of Cooking) as well. I made this quick bread loaf with coarsely chopped pecans and golden raisins, as that’s what I happened to have in the pantry. It’s a rather lovely, dense loaf, as this kind of bread tends to be, and it smells divine. Unfortunately, since there are nuts in it, I won’t be able to send it to school as part of lunch for my girls in the upcoming week. 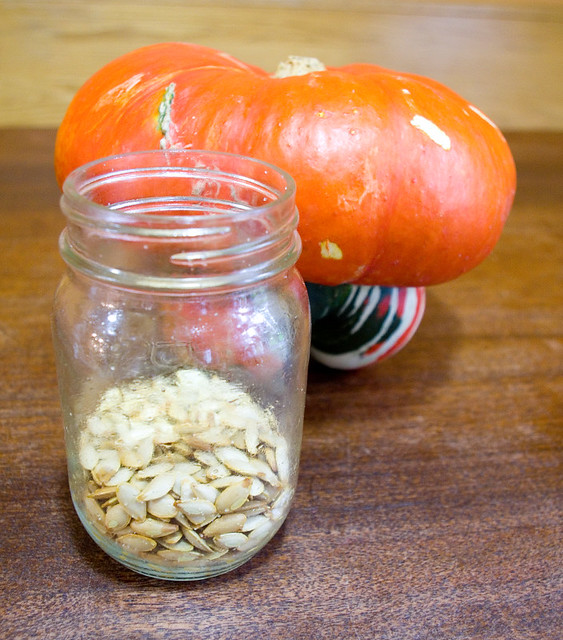 Since I had the time (which I never seem to when I’m carving Jack-o-lanterns for Halloween), I saved the pumpkin seeds and roasted them in the oven with a bit of olive oil and salt. These are one of my favourite fall snacks, and the smell of them cooking takes me right back to my childhood. 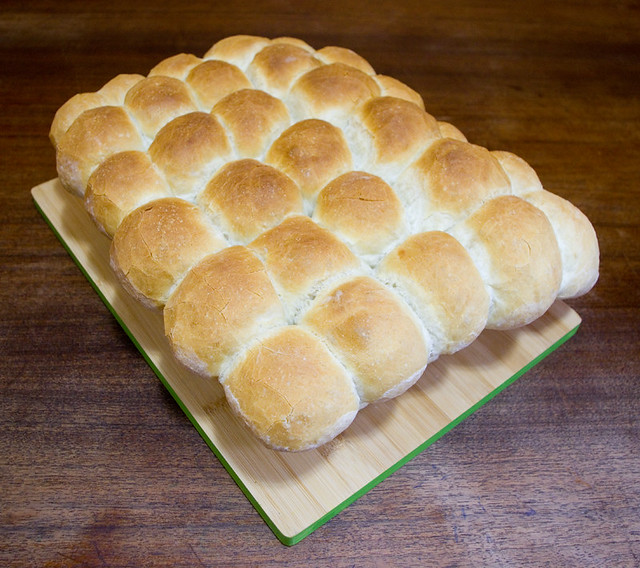 OF course, no family dinner around here would be complete without a batch of Nan’s Pan Rolls. It’s especially fitting this time of year, since Nan passed away four years ago this weekend. Making one of her signature dishes is a fitting way to remember her, I think. 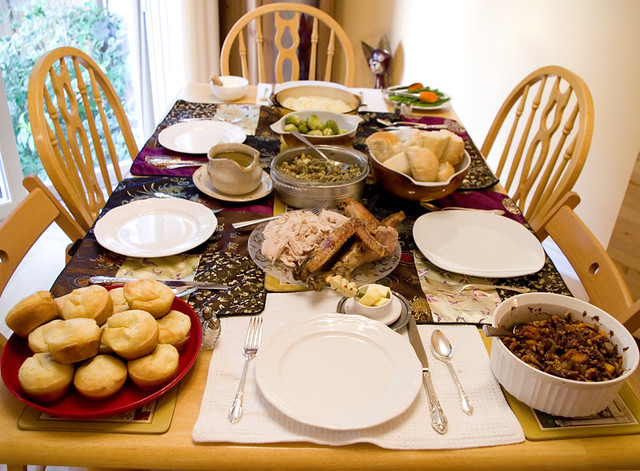 This was Thanksgiving dinner at my parents’ place (bottom to top): Yorkshire pudding, squash & pear casserole, roast turkey, gravy, bread stuffing, pan rolls, Brussels sprouts, mashed potatoes, and steamed asparagus. This may seems like a huge spread, with all of that food for only six of us. However, traditionally you only have a little of each dish at the actual dinner, which is more than enough to feed you to bursting, and then you eat leftovers for the following week. Generally it’s an informal recreation of the dinner on day 2, then (depending on the size of the bird) some kind of casserole on day 3, then hot turkey sandwiches on day 4, then turkey soup or stew on day 5, and so on.