I’ve been looking for creative ways to preserve the carrots from my garden, since there are only so many carrot-based dishes that I can eat in a row. Yes, I could freeze some of them, but my freezer is getting awfully full of soups and sauces and broths (this happens every autumn), so something shelf-stable is what the doctor ordered. I also wanted a recipe that disguised the unusual shapes of my homegrown carrots (which I combined with store-bought orange ones for a bit of visual interest), since I know that ugly food tends to be eaten less enthusiastically than pretty food, even if it tastes identical. 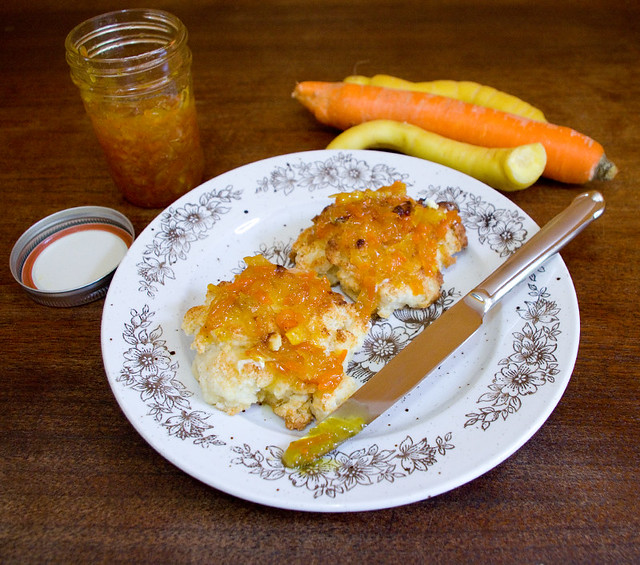 So I browsed through my cookbooks and found a recipe for Carrot Jam on page 206 of Preserving by Pat Crocker (2011). I had never heard of carrot jam before, but there’s a similar recipe for Carrot Orange Marmalade on page 142 of Prizewinning Preserves by Yvonne Tremblay (2001), which apparently earned a red ribbon for best marmalade at the 2000 Royal Agricultural Winter Fair. I guess it can’t be that unheard of. However, the Prizewinning Preserves marmalade was missing the intriguing spices of Preserving‘s carrot jam, which cinched my decision to make the latter recipe.

Preserving suggests letting the jars sit for a few weeks before opening for best flavour, but the cooking jam smelled so darned good that I opened up my first jar the very next day. I am so glad that I did. I baked up a quick batch of Dad’s Biscuits upon which to spread the jam, and then I was in seventh heaven. If these preserves get even better with age, I can’t imagine how delicious they will be. Suggested uses for this jam are as follows (Preserves, page 207):

Carrot jam can be used as any other fruit jam, but I particularly like it on quick bread nut loaves and with savoury meat pies or wraps. Use it as a glaze for cooked vegetables: toss grilled or steamed vegetables in up to 1 cup (250mL) of the jam while hot, just before serving. This is also a flavourful topping for fresh yogurt, or you can add a couple of tablespoons (25mL) to a Vinaigrette Dressing or Salsa Verde.

I can’t wait to try carrot jam in all of these ways! I think it would also make a lovely glaze for roast pork or chicken. I love this recipe so much that I think I will grow carrots again next year specifically to make them into this jam. Maybe I’ll even grow those red and/or purple heirloom carrots just so that the jam is even more visually interesting.