Freezing rain happens every winter here in Ottawa. The temperature will be steadily below freezing for a while, freezing the ground and all exterior surfaces, and then we’ll get a day or two of warmer weather that brings rain. The rain freezes when it comes into contact with those cold surfaces, turning immediately to ice. This encases everything outdoors in a slick coating that can make driving or even walking extremely dangerous. Most of the time, the ice doesn’t end up being very thick, and it can be dealt with by a generous coating of road salt and sand. Often, it’ll bring on a snow day (the schools stay open, but the buses are cancelled). Then the weather will shift again and either melt the ice or snow over it. 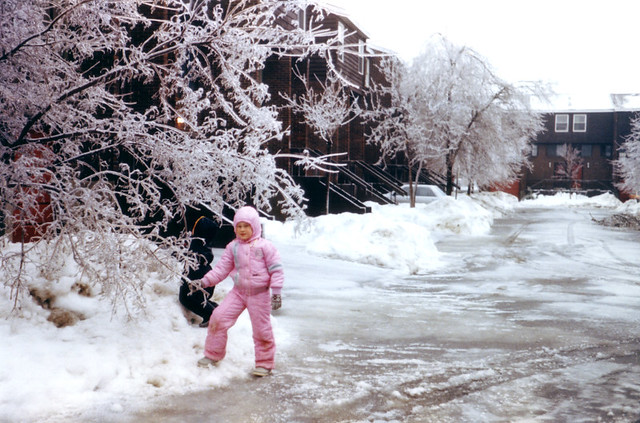 Photo taken by one of my parents.

Twice in my life I can remember the weather going from “freezing rain” to “ice storm”. The difference is really a matter of scale; we don’t call it an ice storm until the coating of ice is thick enough to damage trees and power lines. The first one I remember was in 1986, pictured above. That’s my little brother and I taking a slow and careful walk around the neighborhood we lived in at the time. It wouldn’t have been a snow day, since the storm occurred over the Christmas break (not that my brother was old enough yet to be in school anyway). I even found an old news broadcast in the CBC Digital Archives. 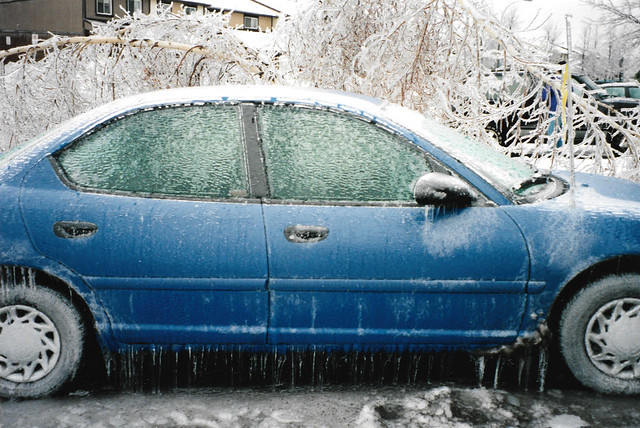 The second ice storm that I remember happened in from January 4th to 10th, 1998. I’m vastly understating the case when I state that this was a much bigger deal. The ice coating was so thick that the weight crumpled enormous hydro pylons, in addition to downing power lines, trees, and tree branches (which then took down power lines, smashed cars, and wrecked roofs of homes and outbuildings). Roads were shut down, over one and a half million people were without power; 945 people were injured and 35 lost their lives (Source: Historica Canada). The storm damage cost billions of dollars to repair. It is considered one of the worst natural disasters in Canadian history. 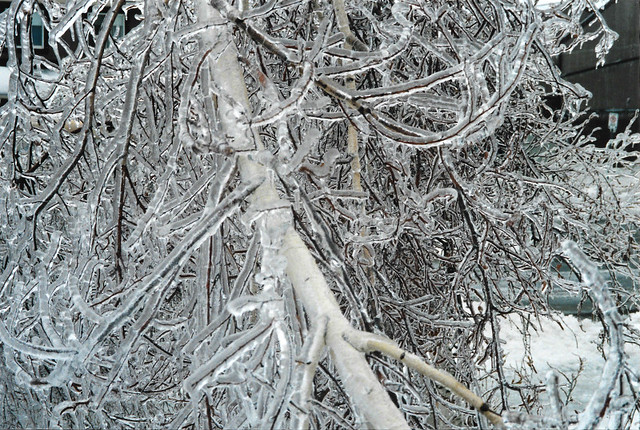 This birch was bent almost double by the weight of the ice, then the ice froze the branches to the ground.

We were very, very lucky because of where we were living at the time. First of all, we didn’t get as much precipitation as some other areas, which received up to 100mm. That alone saved much of our area. We were on a relatively-new residential street, so the power lines were buried underground. Because we were in a city, even though the power cut out often, it never went out for long. Also because the neighborhood was relatively new, we didn’t have any massive trees that, when downed, could do much damage. Sure, many people lost their trees (or had to trim them back severely), and some fell across the roads and had to be cleared, but nothing was growing tall enough to fall on peoples’ roofs, for example. 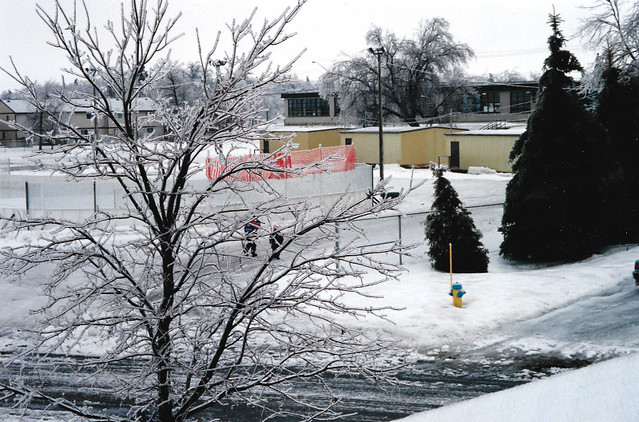 An ice-coated park near where we lived at the time.

We were also very lucky that we had a well-stocked freezer and pantry, so we didn’t have to travel until the roads were safe again. We went for a walk on Day 2, which is when I took the photographs, but we only made it to the end of our street before we turned back, worried that we might slip and fall and be injured. Emergency vehicles were having just as tough of a time with the roads as everyone else, so you were in real trouble if you got hurt. 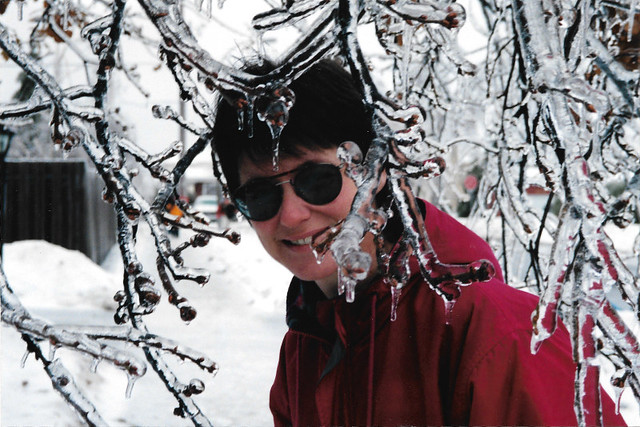 My mom looking through frozen branches.

It was something like two weeks that the schools were closed — and I mean fully closed, not just “snow day closed”. Nobody was going anywhere. Some of my friends, who lived outside of town, stayed out of school longer because their roads were not yet safe, they had no power, and they had to feed the fireplace to keep their houses from freezing. 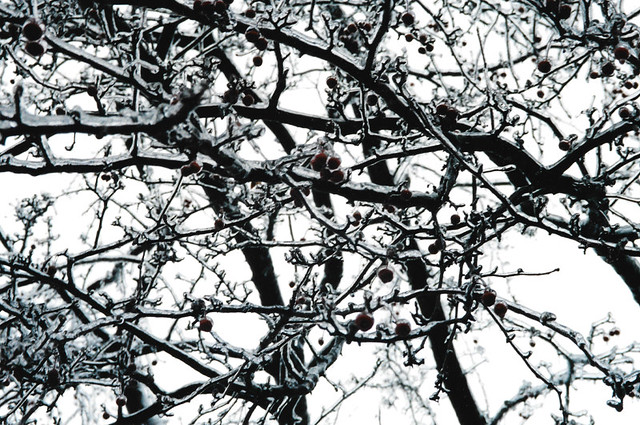 Branches and berries under the ice. I think this photo is right-side-up.

The reason I am writing about these ice storms is twofold. Firstly, it’s almost exactly twenty years since the 1998 ice storm, an event which had great repercussions along an west-east path of something like 500km. If you lived in the area that the storm affected, and were old enough to have memories of that year at all, you remember the Ice Storm of 1998. 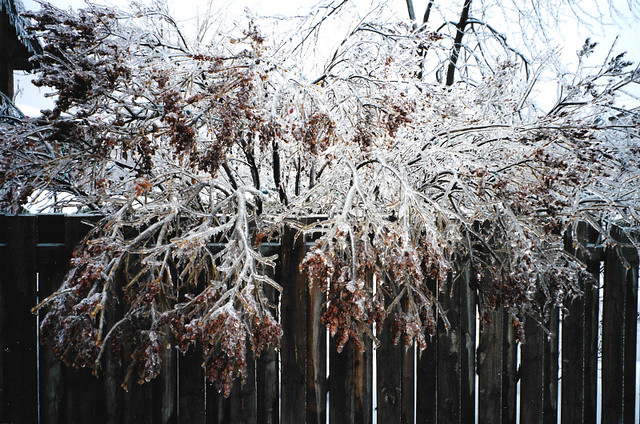 This bush collapsed almost entirely over the fence, weighed down by the ice stuck to its branches and leaves.

Secondly, we had freezing rain yesterday morning, although it was warm enough for most of it to melt later in the day. Overnight it rained, and then this afternoon it is supposed to go below freezing again so that everything will freeze up. The temperature is supposed to drop until it’s back to more seasonal norms, falling over 20 degrees Celsius in twenty-four hours. We’re supposed to get a combination of rain, freezing rain, and snow. I really hope that this doesn’t end up being a proper ice storm. I wouldn’t be at all surprise if we get frost quakes, though.