So Einfach Tasty (the German version of Tasty) got my attention again with their video for how to make Bacon-Wrapped Prime Rib (English version here), which looked so delicious that I just had to try it. Generally, I suck at roasts; they’re either completely tasteless, or dry, or both, no matter how many techniques I try to fix it. But I figured that with a combination of butter, spices, and bacon rubbed all over the outside of the roast, I shouldn’t have too many problems with this recipe. Also, I bought a meat thermometer. So that helped too. 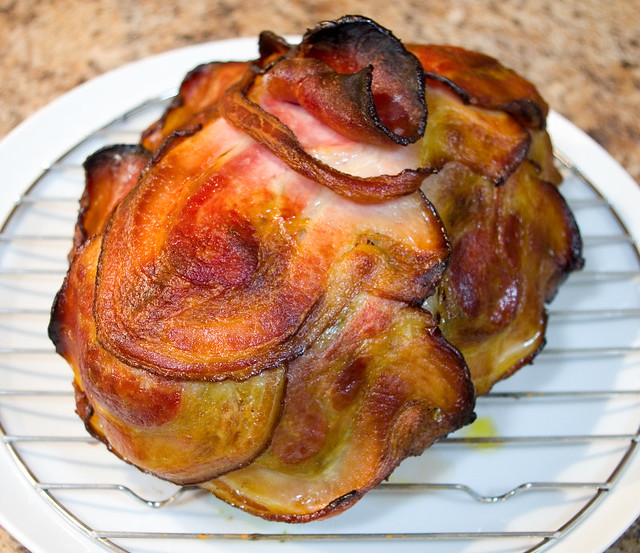 I only made two changes to the recipe. The first was that I used the circular bacon that I had left over in the freezer, so I couldn’t exactly weave it. I ended up draping it over the roast instead, which worked just fine. The top piece curled up when cooking and singed a bit because it was nearer to the heating element, but I just removed it before serving. 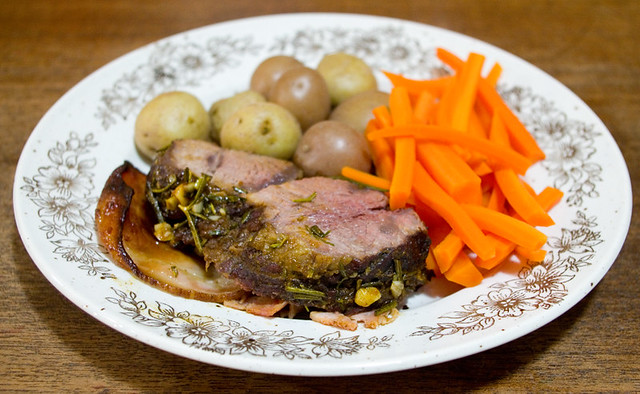 The second was that I used an inferior cut of meat, and you can see this especially in the lines of gristle through the center of the slice. So long as I ate around these unpalatable pieces, it was just fine, though!

I really did like how this roast turned out. It was probably the best one I've made yet (although there really isn't much competition for that title). I served it with boiled baby potatoes and steamed carrots. The kids ate their servings and asked for seconds, but I'm pretty sure they would have been happier if I'd only served them bacon without the beef. I wish I'd had a chance to try the gravy, but unfortunately all of my drippings burned solid to the bottom of the pan, so I didn't get to use them. Ah, well.