I’m trying my darndest to get the costume photos from this weekend edited, but it’s taking much longer than I had hoped, although I do acknowledge that this is mostly because I’m really picky. It would have been much too easy to just crop the photos to size. So it may be another day or two before I have it all done.

In the meantime, I did have to cook dinner last night, which had to be quick because I had to get the kids to extracurricular activities. Thing 2 requested bacon and eggs, which I thought was a perfectly acceptable solution. Earlier in the day I’d put some Milk Loaf (page 65, Bread Machine: How to Prepare and Bake the Perfect Loaf (Jennie Shapter (2002)) on to cook in my bread machine. I just microwaved some bacon (my preferred low-mess way to cook it), scooped out some honeydew melon, fried up some eggs, and buttered some fresh bread for a quick dinner. 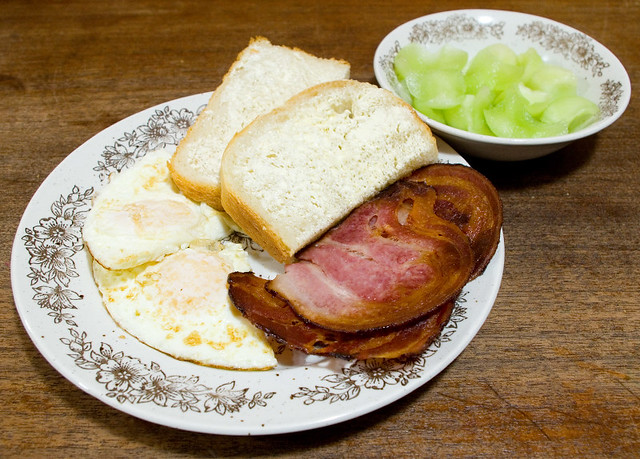 You might note that the bacon in the above photo are shaped unusually. It’s not an illusion, the slices are actually more or less circular! They’re actually Presiden’t Choice Naturally Smoked Bacon Rounds, which are described as follows:

A real game changer when it comes to whipping up burgers, breakfast sandwiches and BLTs, bacon rounds make things so much easier. Cut from the pork belly, they’re everything you love about traditional bacon – only rolled prior to smoking and slicing. Not only are they the perfect fit for buns and English muffins, the edges curl up a little while cooking, creating a “cup” for toppings.

Well, my slices didn’t curl up on the edges, but maybe they do so when fried. I have to admit, I’ve never had any problem whatsoever fitting traditionally-sliced bacon into a sandwich or burger, so I think that these bacon rounds have been created to fix a problem that doesn’t really exist. I mean, if your bacon is too big for your bread, it can be broken if crispy or cut if soft. The rounds are more expensive than the same brand’s regularly-sliced bacon, too ($1.60/100g vs. $1.20/100g). I have a feeling that other shoppers agree, since I found my supply in the clearance section at the local grocery store and I haven’t seen them there since. I paid only $0.99 per package (so $0.26/100g if I did my math right), and at that price it was definitely worth it since the rounds taste exactly the same as regular bacon. Without another comparable sale, I can’t see myself buying these again though.