Yesterday I spent most of Earth Day on my bicycle, which I think is appropriate. It was less because it was Earth Day and more because the weather was finally nice (you’d never know we had an ice storm a week before), and I love to cycle. 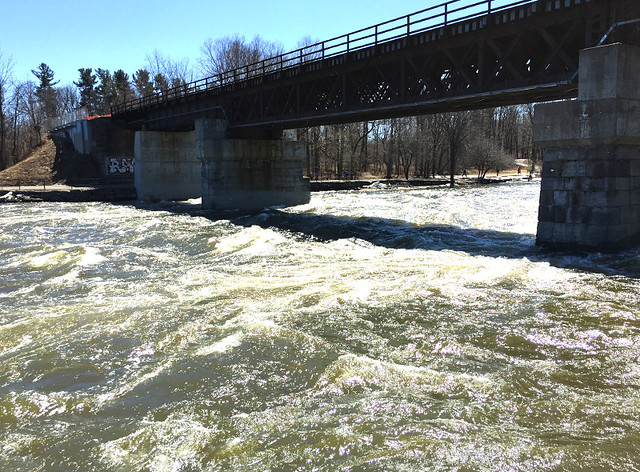 I cycled with my mother along the Rideau River and the Rideau Canal, taking a break in the middle of the ride for a lovely bite to eat in the Glebe. A good deal of maintenance had been done since the ice storm, so most of the big branches had been pulled off of paths and roads, but the large numbers of smaller sticks and twigs sometimes made it dicey going. Every so often we’d find an area with constant shade, and we’d have to be careful of the ice hidden there. The water was really high on the river (although definitely not as bad as last year’s major flooding), so some of the bike paths that run alongside were a little dicey and sometimes inaccessible. Amusingly, when we traveled alongside the canal we realized that it has yet to be raised back to navigation level and was almost dry at the bottom — the water level is controlled by a series of dams and weirs, and it’s only partially filled in the winter to create ice for the skateway. 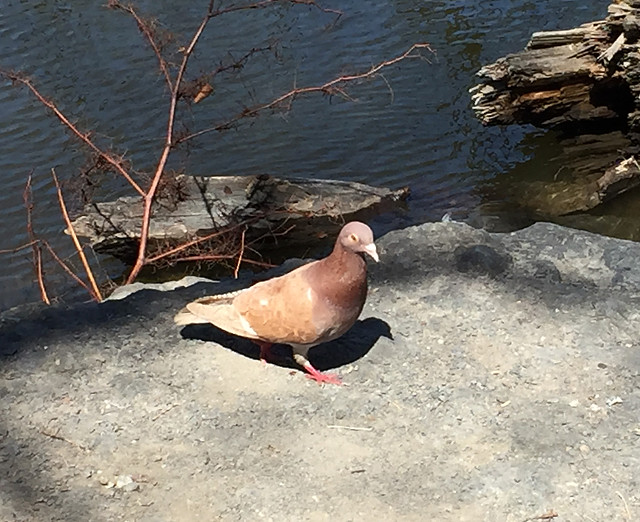 While the plants have yet to green up, the bugs were starting to reemerge (I learned that gnats stick to sunscreen) and we saw a plethora of birds. Although there were worries that the robins would starve in the late freezing weather, we did see quite a few of them. Also in large numbers were pigeons, gulls, and Canada geese; although we didn’t see many of them, we did hear songbirds singing in the trees. We even spotted the odd pigeon in the photo above, which caught our eyes because the pigeons around here generally have colouring more like this. 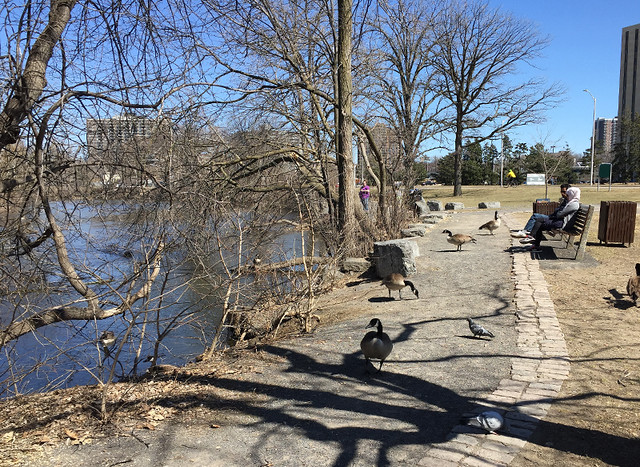 Honestly, it wasn’t the prettiest day. Despite the clear blue sky and the sun shining down, this isn’t the most beautiful time of year to be a tourist. If you wanted to film/photograph something with a post-apocalyptic vibe, this is the time to do it. Just wait a few weeks, though, and it will be beautiful again!

I did do a couple of things that are kind of stereotypically Canadian today, now that it’s warmed up a bit. First, I took my outdoor Christmas lights down. If you live in warmer climes that probably seems quite late, but although I turned mine off on January 1st, by then they were frozen to the ground and under a thick layer of ice and snow. Only now had things melted back enough that I could actually take them down!

Also, today I shoveled the lawn. That probably sounds ridiculous to anyone who doesn’t live where there’s a great deal of snow, so let me explain. At the end of the winter, you’re always left with a few drifts that are the last to melt, usually in areas that don’t get much sun or where you pile snow when you shovel your driveway or paths clear. Well, I have a few spots like that, and I’ve learned over the years that if I want them to melt (and hence dry out) a little faster, I can throw the top layers of snow into the parts of the yard that actually get regular sun. I know it’ll all melt eventually if I just leave it, but by this point in the year I’m impatient for the change of seasons. It probably only takes a couple of days less to melt the snow if I shovel it, but it makes me feel better, gosh darn it! 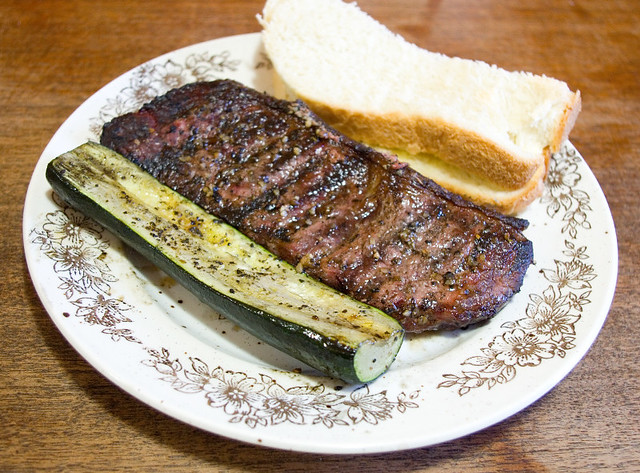 For our Earth Day dinner, my husband cooked us up some steak and zucchini on the wood pellet grill, which I served with some nice homemade bread. We had actually intended to have hamburgers, but I think everyone else in town had the same idea and we couldn’t find buns for love nor money. I think anyone who could do so fired up the barbecue and cooked outside, if only as an excuse to do something out in the lovely weather. I mean, it went up to 16°C (61°F) for the first time since around October, so I really don’t blame them. Ah well, our dinner was probably healthier than burgers anyway — and it was delicious!