So the thunderstorms that they were predicting throughout the day yesterday never happened. Instead, we had drizzle all day that just upped the humidity so that when the sun finally came out, your clothes stuck to your skin and your face became greasy with sweat almost instantaneously. Well, at least the heat and humidity were predicted correctly, and I had planned a meal that could cook out in the garage where it wouldn’t heat up the house: pulled pork in the slow cooker, fresh white bread in the bread machine (simply the herb bread recipe minus, well, the herbs), a few slices of lactose-free cheese, and a grocery store salad. Easy peasy.

Except that at about 4:40pm, right before the bread was scheduled to start its baking cycle and near the end of the pulled pork’s cooking time, the power went out. Blips being what they are, that didn’t concern me too much until 45 minutes had passed, at which point I realized that it wasn’t going to come on again any time soon.

We looked into multiple options, such as borrowing a neighbour’s power (that wouldn’t work, the coverage on this outage was pretty large and affected 1,000+ people), cooking on the barbecue (with nothing thawed and nothing that I had started being barbecue-friendly), and going out for dinner (just like the other 1,000+ people who suddenly couldn’t cook dinner). Eventually we settled on driving over to my parents’ place and finishing cooking dinner there. Of course, to do that I had to wait until my husband got home so we could all go together, which added to the wait. By the time we arrived, the capacitor or backup battery in the bread machine had flattened and it couldn’t be re-started from the same point in the cycle. I mean, at least it hadn’t started baking, since it’s more or less impossible to finish cooking a half-baked loaf over an hour later… So I had to bake the bread in the oven, which was totally opposite of the point of using the bread machine in the first place! And I had to finish the crock pot meal inside my parents’ house, when the whole plan was to cook outside to avoid the heat. Not only that, but in all the hooferah I forgot to pick up the salad! 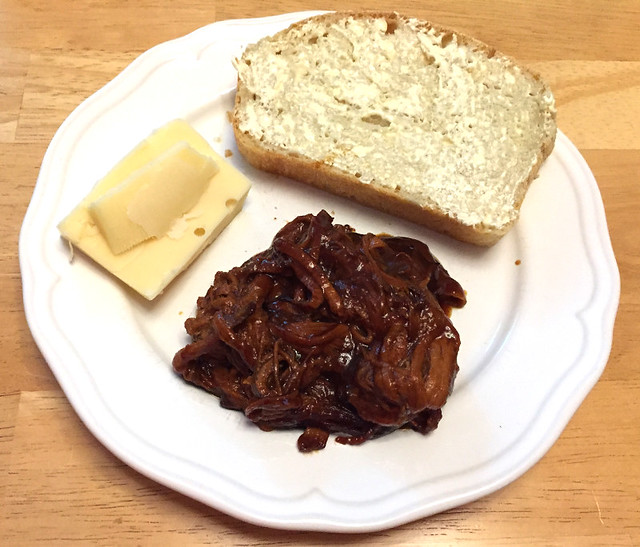 In the end, almost two hours late, the dinner was the pathetic-looking thing pictured above: bland and boring and entirely without even the semblance of vegetables or fruit.

My string of bad cooking luck definitely needs to end soon. I am becoming disheartened.

On the bright side, at least the power was back on for us by 8:00pm or so, when they’d predicted it wouldn’t be up before 1:30am Friday. But I understand that at least half of the 1,000+ customers affected by the outage didn’t get their power back until the wee hours of the morning, so it could have been much worse.