So I had kind of a mini food crisis the other night. I was home alone with my sleeping children; my husband was out visiting some friends. Since I hadn’t been home much lately, the fridge had become very empty, and the pantry wasn’t faring much better. I’d been up since 5:30am that day doing all kinds of lifting and lugging out in the heat, and I was exhausted. However, I couldn’t go to sleep yet because I had time-sensitive tasks that had to be completed. But I was just so exhausted that I couldn’t even think of cooking. I’d left it too late to order delivery, unless I wanted pizza, which my gut just can’t handle. (My friends told me afterwards that there is a local place that makes vegan pizza, i.e. it’s dairy free, and I may try that next time. Or order chicken wings from a pizza place, which didn’t even occur to me.)

In the end, starving but too tired to cook much from scratch, I tried making a microwaved baked potato, but even then I was thwarted: upon cutting it open, I discovered that it was rotten inside. I only got to eat a potato on my second try. I was so tired and frustrated that I was brought to tears over this stupid potato.

And all that time, all I could think about was how good Two Bite Brownies would taste. 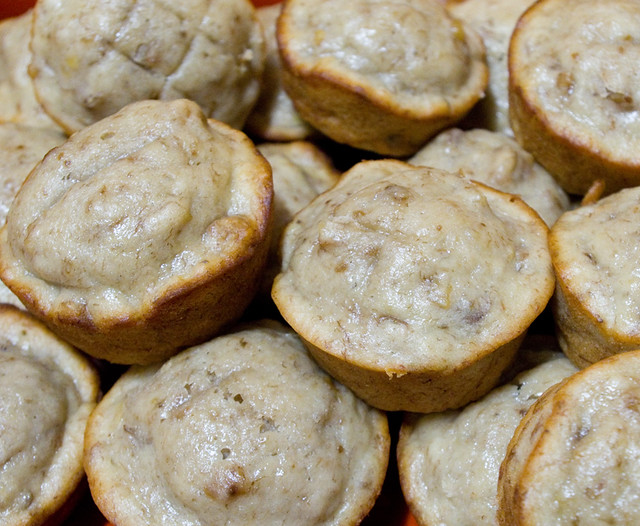 So! I finally am able to go to bed, tummy actually full, but when I woke up the next morning I was absolutely determined that the same kind of thing wouldn’t happen the following night. Hubby home and children awake, I popped out to the grocery store and purchased the ingredients for one of my favourite easily-baked items: banana nut bread (or muffins, in this case). They’re filling and more or less healthy and very difficult to mess up. No was was I going to be exhausted and hungry and frustrated to that degree if I could help it.

I did buy a bag of Two Bite Brownies as well, though.