Yesterday was my husband’s birthday, so at his request I cooked him a special birthday dinner. I’d say that overall it was a learning experience.

The dinner itself was one of his favourites: chicken thighs marinaded in Pataks Tandoori Curry Paste and coconut milk, cooked on the smoker grill (which is finally fixed). Despite appearances, it wasn’t actually burned, although it was definitely overcooked. Now that it’s running properly, the grill heats up better and faster than before, and I failed to take that into account. As sides I toasted some garlic naan bread on the barbecue, and we also had steamed butternut squash with butter and salt. I know I’ve prepared this meal better in the past, but it was still tasty. 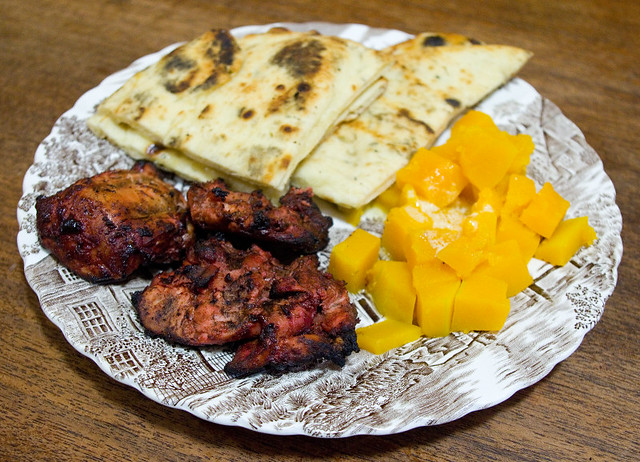 The difficult part — and the greatest learning experience — of my husband’s birthday dinner was actually the dessert: a frozen lemon torte. We’d had this dish at a barbecue hosted by my husband’s boss a couple of months ago, and we both really liked it. Sadly, I could only have a mouthful, as it was filled with whipping cream. As we were leaving the party I requested the recipe from my husband’s boss’ wife, and she made sure to send along a copy a few days later. Sadly, I have no idea what recipe book it comes from, since she just sent me a photocopy of the one page. 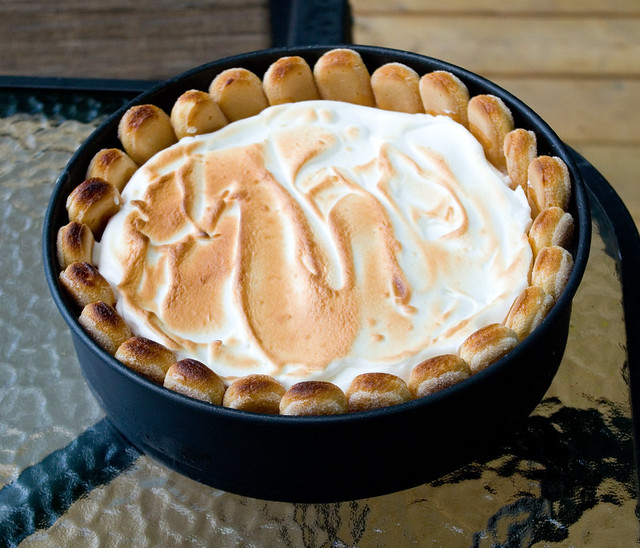 The challenge for me was making this dish without the use of cow’s milk. I was sure that I should be able to make it with coconut milk instead; internet research indicated that it is possible to make an imitation whipped cream from coconut milk. Strike 1 against me was that the milk hadn’t separated after I’d placed the can in the fridge overnight; most instructions for whipping the cream call for using only the solids from the can. I’m not sure if it’s a canning/processing technique or an added ingredient, but my coconut milk didn’t separate. Further Googling told me that I could probably make whipped cream even with non-separated coconut milk, but I would have to whip it longer (15+ minutes), use a thickening additive, and it would still only form soft peaks. Well, mine didn’t even get that thick. I whipped it with a hand mixer for almost half an hour and just got slightly fluffier milk. By this time it was almost two in the morning and I was exhausted, so I combined all of my ingredients, threw the pan in the freezer, and hoped for the best. 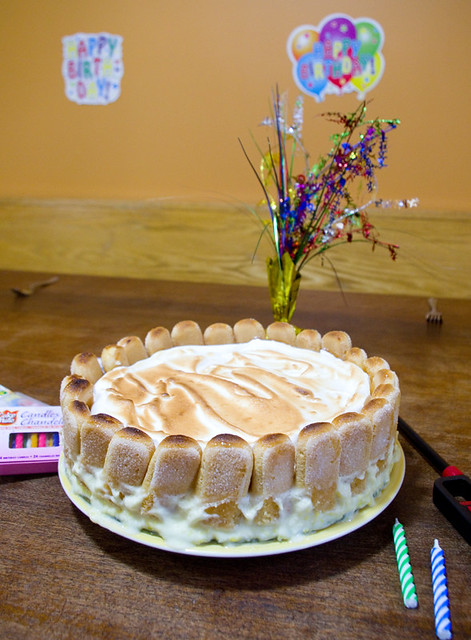 I was really worried about removing the springform pan after dinner, which is why I took photos in advance just in case it all fell apart without support. It wasn’t quite that bad, but it did get mushy really quickly. I’d say that the lemon layer, which was supposed to have a mousse-like texture, was a lot more like ice cream. I mean, that wasn’t bad overall, but it wasn’t what I was hoping for. Also, the lady finger bottom crust, which should have been held down by the mousse, actually floated to the top of the too-liquid lemon mix, and then froze that way. After adding the meringue on top, the cookies ended up being more of a central layer than a crust.

In the end, the torte ended up being more of an ice cream cake with a meringue topping — but at least I could eat it! I really want to have a go at this recipe again, with less of a time limit and more than one brand of coconut milk to try whipping. Actually, I noticed on a grocery store trip today that there is a brand that sells full-fat coconut cream, so that may be the next thing I try. If I ever get the non-dairy version working to my satisfaction, I will post the recipe, I promise!