Because I think that trying new things is important, and because I don’t think there’s such thing as ever truly perfecting a dish, I decided to try a new recipe for pulled pork the other day. On freebie day, someone had left a box of books on the side of the road, and one of the ones in there was Cooking With Beer: Quick & Easy from Publications International Ltd. (2010). One of the ingredients in the recipe was stout – there weren’t any brands mentioned (probably due to trademark or copyright issues), but whenever anyone thinks “stout” around here, one of the first beers to come to mind is “Guinness”. So that’s what I used. 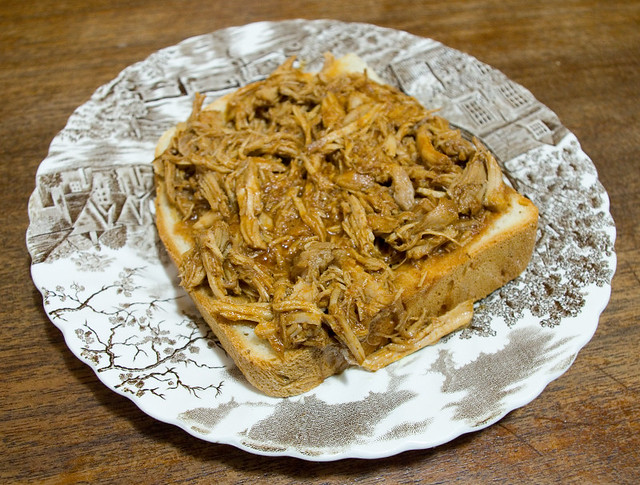 Given that it was a beer-based recipe, I also used Bulls-Eye Guinness Barbecue Sauce (recently bought on sale for $0.99 a bottle), and I served it on my bread machine beer bread (you can find the recipe in yesterday’s post). I thought that this would be the perfect combination.

Sadly, I wasn’t terribly thrilled with this pulled pork recipe. It had a nice flavour, but you didn’t really taste even the slightest tang of beer. Also, the sauce didn’t thicken very much; it was more like pulled pork soup than a proper sauce. And, in my case, it took way longer to cook than planned. I mean, the meat was cooked through by the specified time, but it definitely wasn’t soft enough to shred. Now, that might have been the fault of my oven, but overall the recipe just wasn’t up to my (admittedly high) hopes. All that being said, though, everyone ate their fair share, because there’s only so wrong you can go with pulled pulled pork on fresh bread.