I went to the grocery store yesterday to pick up eggs and milk (the two perishable foods we go through the fastest in our household), I popped over to the meat and seafood counters to see if anything tempted me for dinner. As it turned out, they actually had rock lobster tails on for a reasonable price — or at least what I’d consider to be reasonable compared to the ridiculous price that beef has gone up to lately. Lobster in my budget is extremely rare, so I had to pick up enough for dinner. 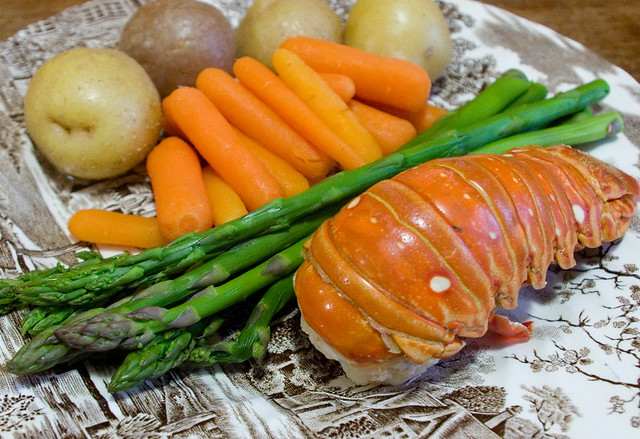 I followed the instructions from Maine Lobster Now and I was impressed with how quick and easy it was. (Most of the lobster I get these days is the much cheaper frozen claws from T&T to make Carribbean lobster bisque.) The girls were a little intimidated by the shell — they’ve had lobster as often as I could afford to serve it, but I don’t think they’d ever had to deal with cracking their own before. I don’t blame them, since even to me the tail looks a heck of a lot like a giant wood louse! Luckily I’ve been to a fair number of lobster boils in my day and, as per the instructions, the meat actually was very easy to remove once it was cooked.

I served the lobster with steamed asparagus, baby-cut carrots, and baby potatoes, all cooked very easily in the microwave. All in all this meal took me about 25 minutes to make, which is good because I was (as usual) running late. One thing I missed out on was garlic butter to drizzle on the lobster, which I do regret, but it was pretty darned good anyway.