My husband and I have been married for almost ten years now, and we have been together for fifteen. For all of that time, I have been the primary cook in the house. So I hope you can understand how surprised I was when my husband complained a month or so ago that I have made all kinds of foods based in my Canadian and British heritage, but I never cooked anything from his German background except the occasional bratwurst. This was the first time he’d requested German food in the fifteen years we have been together. I really wish he’d said something sooner. New cuisine has a learning curve! 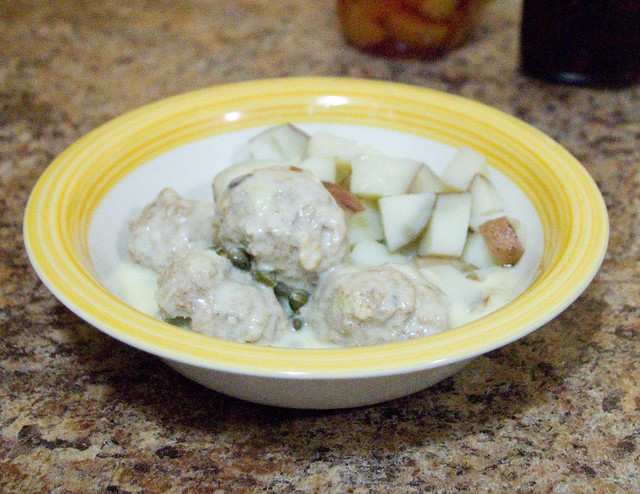 Now, I love trying new dishes, that’s not the problem. It’s just that I had never cooked anything specifically German before. (This was before my experimentation with labskaus.) I asked my mother-in-law if she could suggest any books or other resources that might help; she gave me her extra copy of her favourite German cookbook, ‘Round the World Cooking Library: German Cooking by Arne Krüger (1973). From the introduction:

“A word that the Germans themselves use to describe many aspects of German life is “gründlich”, meaning solid. Like most national characteristics, the German reputation for extreme thoroughness and heavyhanded seriousness has been exaggerated. But no one — and particularly not the Germans themselves — would deny the German passion for organizing everything down to the smallest detail, or their profound distrust of improvisation. This applies not only to their cars and cameras, but to their cooking as well. German cooking may not possess the fantasy and imagination of Italian cooking, or the delicate refinements of French cooking, but this does not mean that German cooking is bad. On the contrary. German home cooking (which the Germans call “gut bürgerliche Küche”, or good plain cooking) is honest, down-to-earth, simple and substantial; it is perfectly in tune with the earnest spirit of German life.”

(As an aside, I ran “gut bürgerliche Küche” through Babelfish, and it came back with “good middle class cuisine”, which seems close enough.) 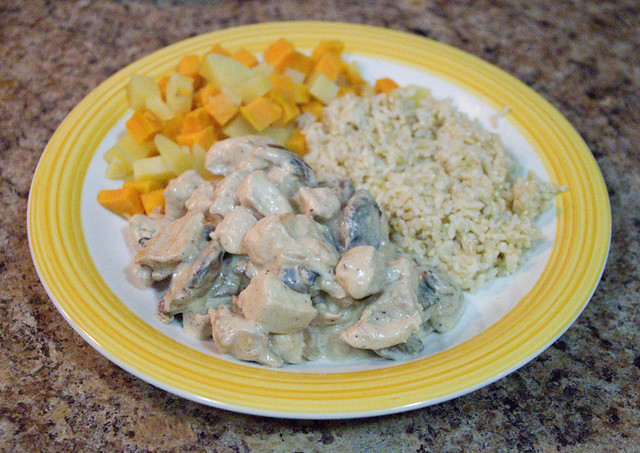 Chicken Stroganoff from page 78 of The German Kitchen: Traditional Recipes, Regional Favorites by Christopher and Catherine Knuth (2013). Quite tasty. I thought stroganoff was a Russian dish, but in this book it was presented as German, so what do I know? Served here with brown rice and steamed white & orange sweet potato cubes.

While German Cooking has been a great resource, I needed to read up further. I scoured my local library for German cookbooks and put a whole stack of them on reserve when they weren’t immediately available. I’ve read and reread them a number of times. I’ve tried out a few of the dishes and I think I am starting to get a rough grasp on them. I think the hardest part so far has been finding the proper ingredients. One bread recipe, for example, called for (among other ingredients) spelt flour and malt powder. I was finally able to find the spelt flour in a health food shop, but the malt powder eluded me for some time. I eventually went to a brew-your-own-beer place, which did have wheat malt powder for sale. I never did find barley malt powder, which I’m told is the standard in Europe. Also, sometimes the malt is sweet, and is sold in a syrup that is eaten the same way one would eat molasses here. Is there a powdered version of this syrup, like how you can get maple sugar? If there is, I haven’t seen it. Which kind of malt powder did they mean? It’s probably perfectly obvious to someone who has made this these dishes before, but for a beginner in German cuisine… I’m just not conversant with all the variations of the ingredients. But I am learning!