Continuing this week’s theme of maple dishes, last night I tried out the Buttermilk Maple Cornbread with Flax recipe on page 43 of Anita Stewart’s Canada (2008). A number of the recipes I have used lately have come from this book, which I am greatly enjoying. I need to return it to the library shortly, so I have to optimize my use! Now that I’ve baked this cornbread, I have used every maple-based recipe in the book, with the sole exception of the crepe recipe on page 17. Between the buckwheat pancakes and the crepes I’ve made lately, I just didn’t feel the need to make yet another style of pancake. 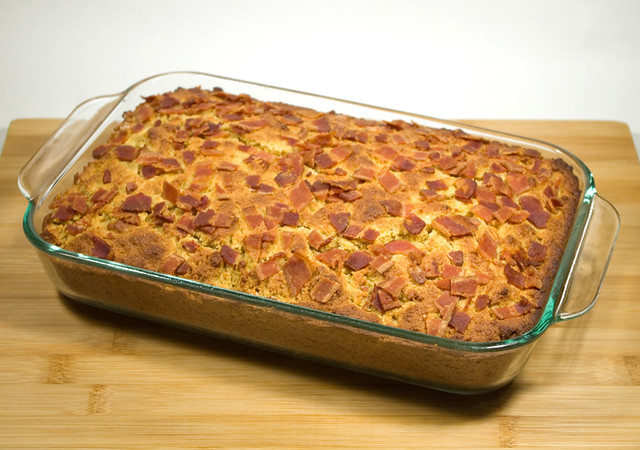 The cornbread is only lightly sweetened with maple syrup, so the flavour is much more subtle than something like a pouding chômeur. Despite the syrup content, it is not a dessert quick bread; it would actually be a great accompaniment to roasted or barbecued meats, especially saucy ones. The top is sprinkled with chopped crispy bacon pieces, adding little bursts of extra flavour, although I think this bread would be great without the topping as well. 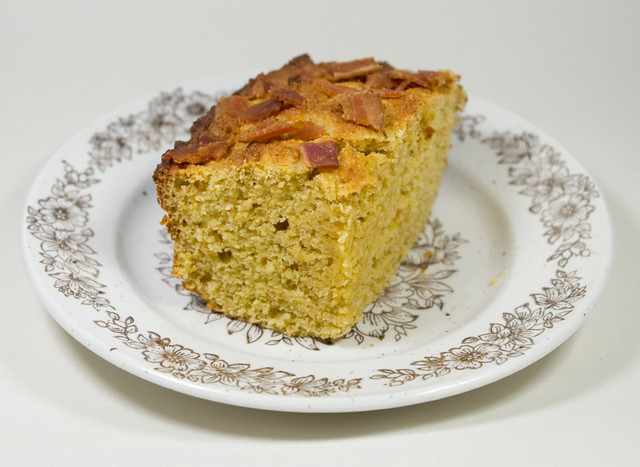 I almost burned the cornbread while baking it; I was warned by the smell, and I got it out of the oven just in time. My timer for the minimum recommended time hadn’t even gone off yet! I think that the blame for that can be placed upon my oven, which, as I’ve complained before, has been giving me issues when it comes to even, predictable heating. A new oven may be required sooner rather than later, although I shudder at the expense. I hope that I can make it last at least until the end of the summer at least, since I don’t use it much at all once the weather gets scorching.

I also cooked my corn bread in a glass dish instead of the cast-iron skillet specified by the recipe. Why? Because I’ve only got the one cast-iron pan, and it was too small. I think it turned out fine, considering. I believe that the use of cast iron is more tradition than anything else. However, using a preheated cast iron pan may create a crispy bottom crust on the cornbread that I was unable to achieve with a glass baking dish.