Yesterday was my husband’s birthday, and the tradition at our house is that you get to eat whatever you want (within reason) on your birthday. This often involves going out to a restaurant, but this year my husband asked me to make his dinner instead. His choice of dinner necessitated a special trip to T&T Supermarket for ingredients, which was, as usual, an event in itself. Every time we go, we have a meal in the cafeteria, and then the kids have to check out all of the samples and go watch the live fish and seafood in their tanks. We also have to peruse the produce and packaged goods sections for food we’ve never tried before, and for ingredients for new recipes we’d like to try. There is no such thing as a quick trip to T&T with my family. 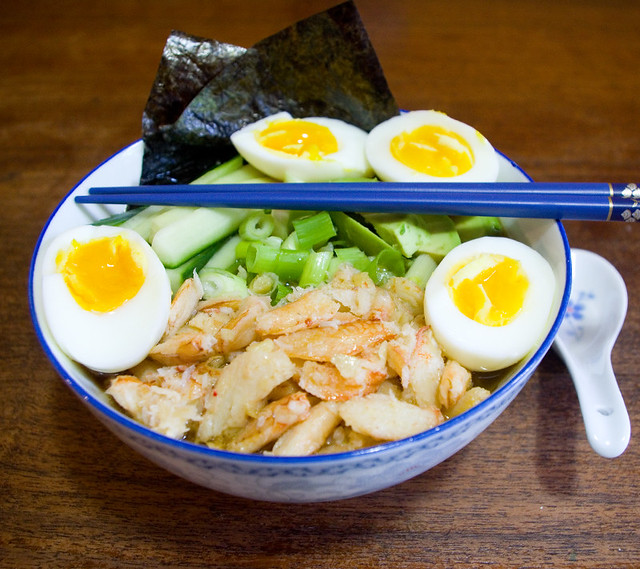 The main meal that my husband requested was California Ramen from page 86 of Simply Ramen (Amy Kimoto-Khan of easypeasyjapanesey.com, 2016). My copy of the book was actually a birthday gift to me from my husband a few months back, and I feel this may have been a not-so-subtle hint on his part. This dish is based California roll sushi, with toppings of avocado, cucumber, and crab. The recipe recommends fresh Dungeness crab, but I had never cooked live crab before, and I have to admit that I chickened out and used frozen crab instead. I distributed one package of frozen crab meat out around our family of four, but I admit that I probably could have used half as much crab and been just as happy. I also ended up using soft-boiled eggs instead of the marinated half-cooked eggs recommended, mostly because I misread the directions and didn’t realize they had to start marinading two days before the dish was to be made. Whoops.

The standout flavour of this dish, though, was the shoyu base broth. I’d never made it before, but it was both delicious and very simple. It packed a huge amount of flavour and tasty aroma into what I would have thought is just another slow-cooker broth. The recipe calls for dashi granules and soy sauce (both of which are high in sodium) and salt, but I had to take into account my family’s tastes. I left the salt out, and I am glad I did. The broth was just fine without it. In addition to the broth, I ended up with a lovely cooked chicken and melt-in-your-mouth oxtail (both of which are supposed to be discarded after being strained out of the base), so that’s two meals in one, really. All in all, it was a 10/10 recipe, and I will definitely make it again after I use up the leftovers that I froze! Now I want to try all of the bases in this book, especially the tonkotsu — my absolute favourite when I go to a ramen restaurant. 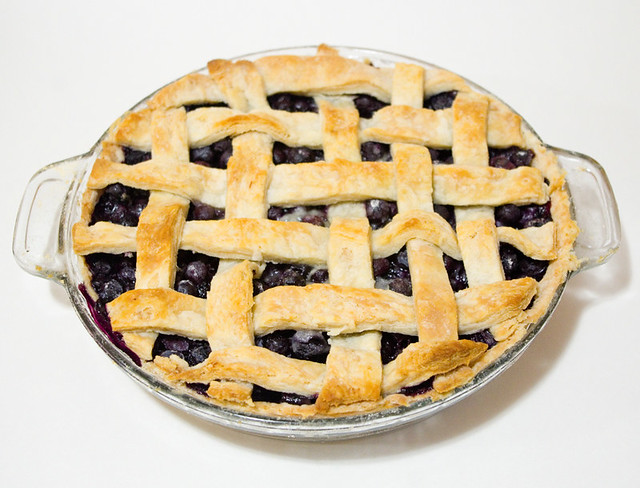 Of course, no birthday in our house is complete without dessert, and as my husband is not a big fan of sweet dishes, I made him up a fresh reduced-sugar blueberry pie. I cut down the sugar from the recipe by a third, but the blueberries were so sweet by themselves that I could probably have reduced it by a half or more. Once again, I used the Purity Pastry crust from page 73 of the Purity Cookbook (2001 edition), and the fresh fruit pie filling formula on page 228 of The Canadian Living Cookbook by Carol Ferguson (1987). I made a latticework crust, which turned out pretty well considering that a) it was only my second time making one, and b) Thing 2 somehow managed to step on the edge of uncooked pie while I was showing it to her, and I had to totally reassemble it. If you’re pondering the logistics of that, be aware that there was a stool involved so she could see what I was working on at the counter, and that the pie’s innards all fell out onto a clean baking sheet. 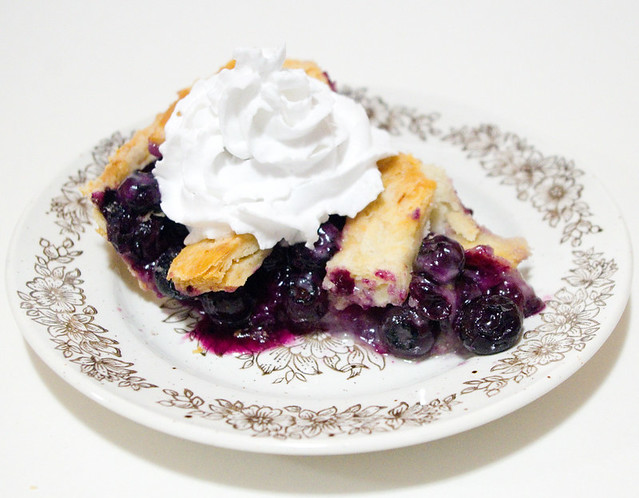 As many of my pies do, the blueberry one did not stand up well to a serving knife… It kind of crumbled and fell apart. I figure that’s not so bad because that means that the crust is nice and flaky. And yes, I did keep thinking of The Frantics’ A Piece of Pie while I was making this dessert. “Great big blueberries!”