Last night I attended a potluck dinner held in honour of a members of my husband’s extended family visiting all the way from Germany. For the occasion, my in-laws rented the party room in their friends’ posh apartment building, which was the fanciest location in which I have ever attended a potluck. However, the view of the Rideau River and Rivierain Park were gorgeous coming up onto sunset. (I’m assuming the views of downtown at sunrise would be equally spectacular, but at by evening the sun was too much in our eyes to appreciate it.) 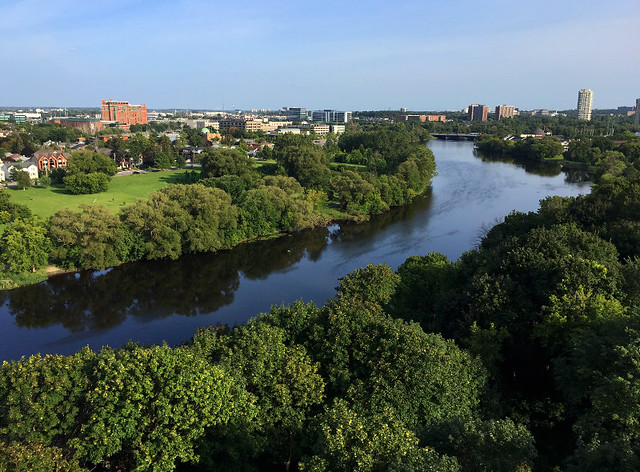 Given that the guests of honour were international, I went all out and cooked up a storm of dishes to bring along. I wanted them to get a taste of the favourite Canadian dishes that I grew up with. 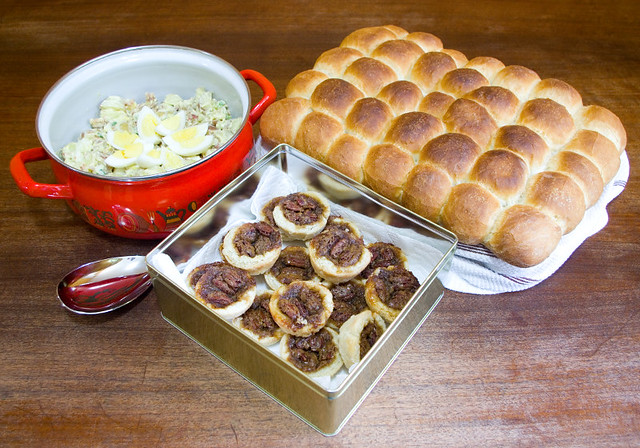 On the far left is the fancy version of my mother’s potato salad (recipe here). At the center is maple pecan butter tarts, using the recipe found on page 234 of The Canadian Living Cookbook (Carol Ferguson, 1987). Despite these being one of my absolute favourite desserts ever, this was my first time ever baking them. I think they turned out rather well, although the filling did overflow the crust a little bit. Lastly, I made up a batch of my Nan’s Pan Rolls.

I always worry that my cooking won’t hit the right note with the guests at a party, but this time every last bit of food I brought was consumed. I actually should have made a double batch of the potato salad, because a number of people came back for seconds and were audibly disappointed when there was none left. I got quite a few compliments on the rolls and tarts, too, but I think the potato salad was the biggest hit. The German grandmother hunted me down and made sure to make it clear, in her few words of English and copious hand gestures, that she absolutely loved it. I couldn’t be more pleased.