Recently I came across a copy of The United Churches in Canada: Let’s Break Bread Together — the September 1988 version, though, not the current one. I love cookbooks that are comprised of favourite recipes contributed by members of the organization. I mean, where else can you find quality recipes like this one: 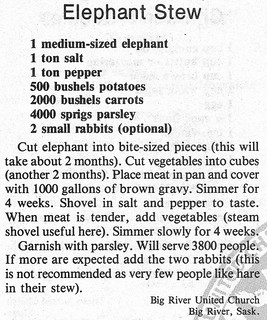 Jokes aside, I have learned how to make some really great dishes from books like these. I have also contributed to a few; off the top of my head I know some of my recipes have ended up in books published by my high school, the local chapter of the Girl Guides of Canada, and my kids’ preschool. Not only are these cookbooks great fundraisers, they’re also a nice way to bring the community together by introducing neighbours to the flavours and dishes that are important to them.

All that being said, these cookbooks are not written — and as importantly, are not edited by — professionals. These days it’s not as bad, what with spell check and the ability to digitally track changes when a document is being sent around for review. But you have to be very, very careful to fully read a recipe from start to finish with pre-2000 cookbooks. Well, I mean, you should probably do that anyway with any recipe, but at least in professional cookbooks they’ll generally include all of the ingredients in the ingredient list, and a general expectation of yield, and have fairly clear instructions. 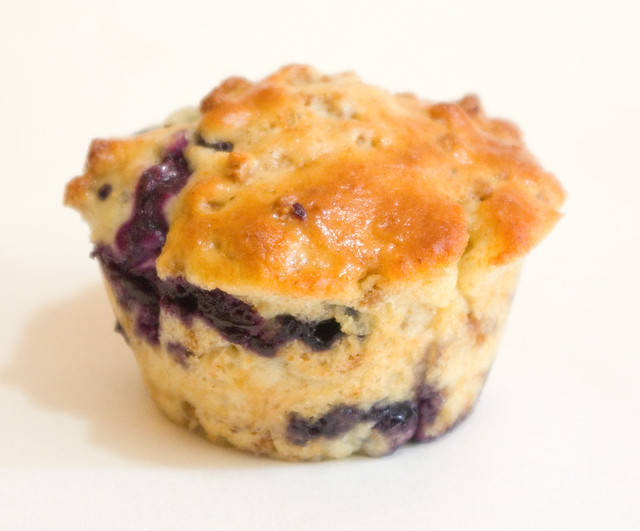 I’ll use the blueberry bran muffins recipe on page 86 of Let’s Break Bread Together as an example. It specified All-Bran Cereal — but what kind? Right now, in Canada, there’s All-Bran Flakes, All-Bran Buds, All-Bran Multigrain Crunch, and All-Bran Granola. Now, I understand that in some cases with older recipes, there was only one variety of an ingredient even though now the company may have branched out. In this case, though, a quick search of the Internet reveals that in the mid-’80’s there was the equivalent of Flakes and Buds, so it should have been specified.

Also, the blueberries in the muffins, which were so clearly stated in the title, were not in the ingredient list. Instead, the kind and quantity of berry were buried in the baking instructions. As you can see from the recipe above, the formatting of this books is such that the ingredients are supposed to be in bold and indented from the rest of the text; they are most often found at the start of the recipe as well. It can be really confusing when ingredients are not where you expect them to be.

Now, please don’t think I’m angry about all this. I’m really not. This book was put together by volunteers (in this case, the United Church in Meadowood, Winnipeg, Manitoba) in their free time before the general use of the home computer. However, what it does for me is it makes me aware of how important precise instructions are to the ease of success of a recipe. It definitely makes me want to give another go-over of the recipes I’ve written, that’s for sure. And if anyone else uses one of my recipes and notices something that should be changed, please let me know so I can fix it! 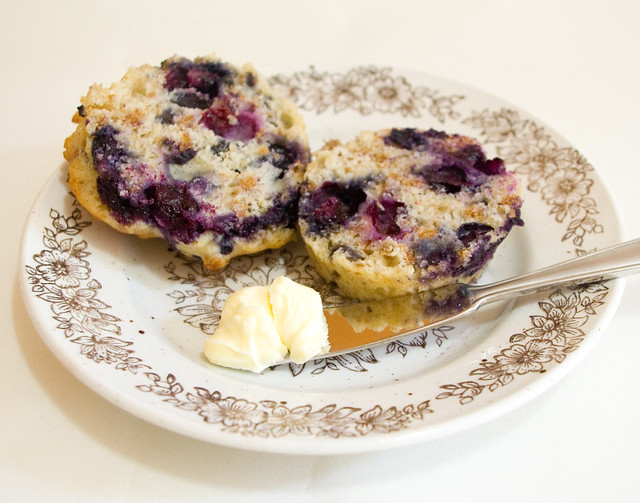 Here is my version of the blueberry bran muffins recipe, updated for accuracy and to make it a little bit healthier. I have tried out the changes and it resulted in the delectable muffins seen pictured above.

In a large mixing bowl, beat:
– 2 large eggs
Mix in:
– 1 cup 2% milk*
– 1/2 cup unsweetened applesauce
– 1 cup All-Bran Buds
Let stand 15 minutes for Buds to hydrate.
Preheat oven to 400°F (175°C).
In a separate mixing bowl, combine:
– 2 cups all-purpose white flour
– 1 cup white sugar
– 4 tsp baking powder
– 1 tsp salt
Add dry ingredients to wet ingredients, stirring until blended.
Fold into batter:
– 2 cups fresh blueberries**
Spoon batter into greased muffin tins 3/4 full. Bake 15-18 minutes, until done. You will be able to tell that the muffins are done when the tops turn golden-brown and a toothpick or wooden skewer inserted at the center point comes out clean.
Cool the muffins for 5 minutes in the pan, until the tops are just cool enough to touch. Gently, with your fingertips, spin each muffin a quarter turn in the pan. This will dislodge the muffin from the pan and help keep it from sticking. Remove the muffins from the pan and finish cooling them on a wire rack. Once cool, they may be stored in a container for about five days. However, they are best eaten as fresh as possible.

*Alternately, a milk substitute such as almond milk or soy milk may be used. If you do so, reduce the volume of milk substitute by 1 Tbsp, and add 1 Tbsp light vegetable oil such as sunflower or canola.
**Alternately, you may use frozen blueberries. However, before using they should be thawed and the excess liquid drained.