I love fresh noodles. I am endlessly fascinated by videos like the ones about making thread-thin suo noodles or precisely-cut Chinese spinach noodles or seemingly-effortless hand-pulled noodles (emphasis on “seemingly”). In Japan, I was lucky enough to be able to try fresh ramen and, I think, udon, but there may have been a bit lost in translation.

Sadly, it’s hard to get fresh noodles of any style around here. There are a couple of specialty restaurants that make them, but for home use the closest I can get is refrigerated ones from the grocery store — and that’s only European styles. So until someone teaches me how to hand-pull noodles, or until I can afford an automatic pasta maker (or at the very least a hand-cranked pasta machine), I’m stuck with frozen or dried noodles. 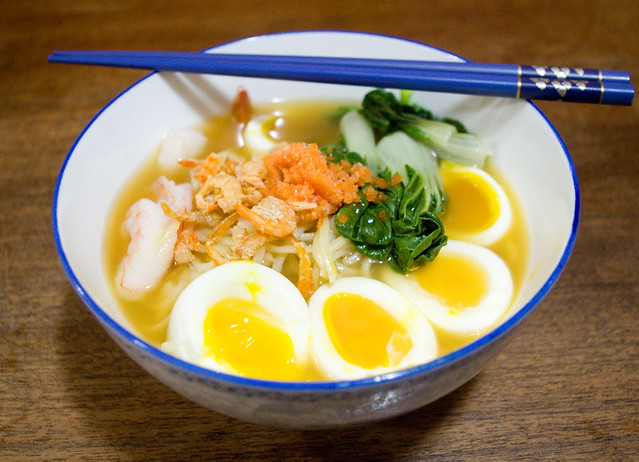 The consistency of dried noodles doesn’t seem to bother my husband. Sure, he likes freshly-made pasta on the few occasions that we do get it, but he doesn’t crave the chewiness and strength of well-made ramen or udon. When he cooks ramen for dinner (and he always uses either instant broth or my homemade broth from the freezer), the consistency of the noodles doesn’t even cross his mind. 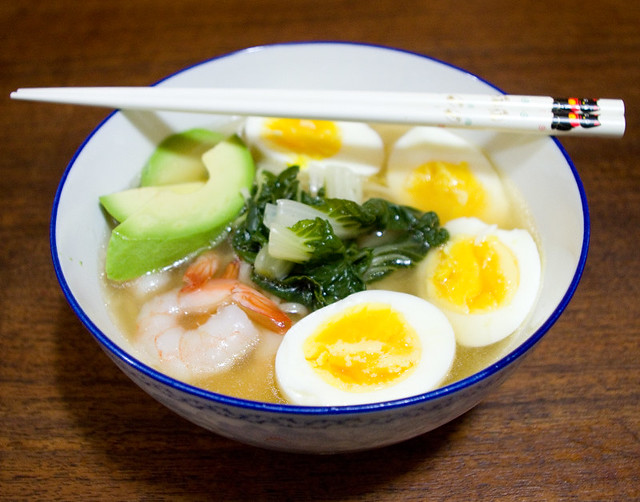 That being said, he is willing to go along with my conviction that there are much better things out there. To that end, we’ve been trying out the other brands of ramen that are locally available, which admittedly aren’t very many. We started with dried noodles — not the ones in the instant noodle packets, but something very similar. The last two meals my husband made used Nissin Frozen Ramen Roodles in Artificial Pork Flavour. The noodles were a bit better than the dried kind, but not by much. The broth mix that went with the noodles actually had less flavour than the packets that come with instant noodles (and so far as I can tell they had just as much sodium). I think the lack of punch is funny considering that Nissin is the same company that makes our family’s preferred brand of instant noodle packet. If I have to eat a just-add-water soup, I prefer their Tonkotsu Artificial Pork Flavour with Black Garlic Oil.

So I guess this frozen ramen was overall a bit better than the dried kind, but only a bit. I have another variety in my freezer left to try, though, before I head back to T&T to see if they have any others.

As an aside, did anyone else use to eat dried ramen as a kid without cooking it first? It makes me cringe in retrospect, but we used to sprinkle the dried sauce packet over the top and eat it as is. I was reminded of this recently when I noticed that one of the local grocery stores had instant ramen on sale for 27¢ a packet, and I realized how happy this would have made me as a child, or as a broke college student for that matter. How my teeth survived unbroken I’ll never know.