I’ve been craving pizza lately, which is pretty much a no-no because of the issues that my digestive tract has with dairy. However, to my everlasting joy, I’ve discovered that I can eat lactose-free cheese so long as I don’t go overboard, since cheese is also quite greasy, especially when melted. Since none of the pizzerias around here carry lactose-free cheese as an option, I thought that a “make your own pizza” evening was in order. 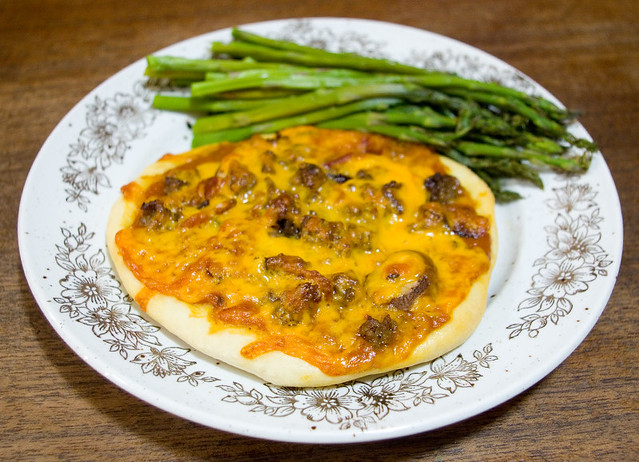 It didn’t look spectacular because I put the toppings under the cheese, but it tasted great! I started with the dough from the Two-Cheese Pizza recipe on page 170 of Betty Crocker’s Best Bread Machine Cookbook (1999). This made enough for one 12″ pizza or four 4″ or so thin-crust-ish pizzas. (Next time I do this, I’m doubling the recipe.) You can’t actually cook pizzas in the bread machine, so I rolled out the dough into individual crusts and everyone topped their own. I used Healthy Veggie Tomato Sauce that I had in the freezer as the sauce, although I did simmer it a little to reduce it a little bit. I topped my pizza with ground beef and crumbled bacon, along with a few cremini mushroom slices. The rest of the family had theirs with more traditional mozzarella, but since cheddar was the only kind I could get lactose-free, I went with that.

I’ve tried Jamie Oliver’s Quick Family Pizza in the past, and although the kids liked it, one of the things I discovered about myself is that I’m not a big fan of the taste of self-rising flour. I think it’s just a little too salty for me. At any rate, I like the yeast dough a great deal more, and it’s just as easy as the quick bread version if I use the bread machine. So I think I’ll stick with this kind of dough for future pizza iterations.