Earlier this week I accidentally bought two packages of pork riblets. I was distracted by the fact that each package was less than $2.00 and didn’t read the label very well; I thought that what was inside the package was solid meat instead of mostly bone. When I went to cook it I was highly disappointed! So I threw the bones into a crock pot and simmered them for two days in order to get a passable broth.

On that same shopping trip I bought some pork belly slices for about 75% off, with which I was much less disappointed. I haven’t had much luck cooking pork belly in the past (one time I over-salted, another I cooked them for much too long and they were tough). I went to the Internet and found that one way to cook them for soup is to simmer them. I used: 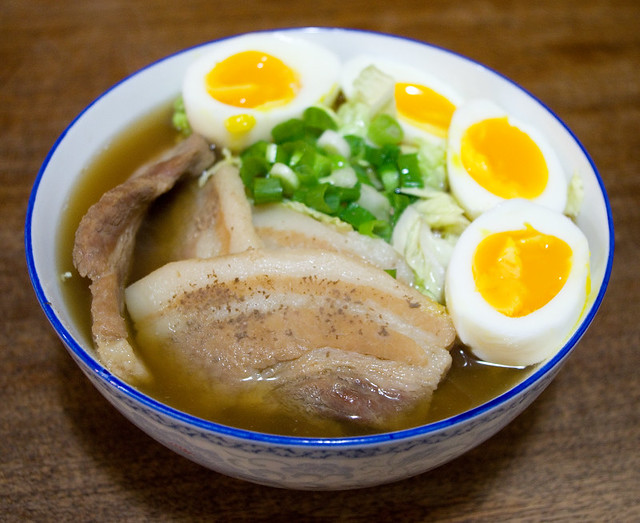 When the meat was done, I set it aside and added the remaining simmering liquid (with the large particulate strained out), plus 1 tsp instant dashi granules and a drizzle of mirin, to a pot of the pork bone broth I’d made. The broth turned out nice and flavourful, but the pork belly still needs a bit of work; perhaps if I marinaded the pork belly in the liquid first, simmered it, then grilled it briefly to get some browning? I definitely need some more practice before I get it 100% right.

In my ongoing quest for a better noodle, I served the pork and broth over a base of Kumai Japanese Style Handmade Ramen noodles by Chewy International Foods Ltd.. They’re still nothing close to fresh handmade noodles, but they have been the best pre-packaged noodles I’ve tried so far. You only have to cook them for 30 seconds in boiling water, which I think really helped them stay nice and chewy.

I served the ramen with shredded Napa cabbage, soft-boiled eggs, and green onions, in addition to the pork belly and broth I’d made. It wasn’t perfect, but it was quite tasty, and I enjoyed it. Too bad Thing 1 is down with a cold again and couldn’t really enjoy it, since it’s generally the kind of dish she prefers. At least the warm soup felt good on her sore throat.