Yesterday was a busy day for cooking. The first thing Thing 2 did when she returned from school was to request that we make muffins together. I used up the leftover pancake mix from the Pancake Mix & Peach Muffins to whip up a second batch; it turns out that the size of box that they sell at the dollar store will make two batches with a little left over. This time we tried the recipe with the spices (which greatly enhanced the flavour), and added apricots instead of peaches as the fruit. No nuts again this time, since the kids want to take them to school. They turned out quite well! 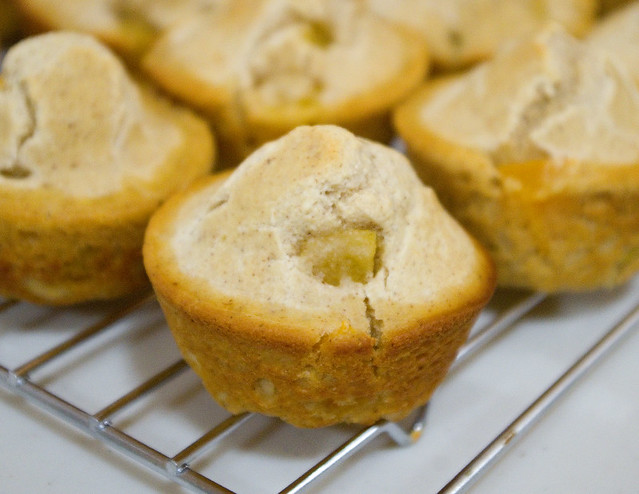 For dinner I decided to try a few things I hadn’t made before, the first of which was chicken schnitzel. Schnitzel is one of my husband’s favourite foods from his childhood (although he insists that it’s not real schnitzel unless it’s pork). I found pre-tenderized and breaded schnitzel on clearance at the grocery store yesterday, so I figured I’d give it a shot. In all honesty, I did overcook it, but my husband still ate his portion and the kids’ leftovers, so it wasn’t that bad. I think I know where I made my mistakes and I know what to change when I try this dish again in the future. 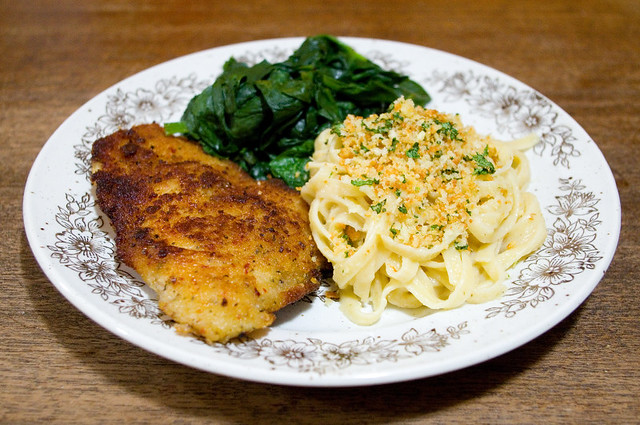 The second new dish that I made was linguini with Cauliflower Alfredo Sauce from Just A Pinch. I’d seen this recipe referenced on a few cooking blogs and it was touted as being fantastic. I love creamy sauces, but my digestive system can’t handle much milk, so I thought that this was the perfect solution. My sauce turned out a little more brown than the recipe’s, but that’s because my homemade chicken broth turned out more brown than the commercial kind because of the way the chicken was originally prepared. Taste-wise, I don’t think that affected it much, though.

My main problem with the recipe is that after following all of the instructions to the letter, the sauce ended up being really, really watery. I mean, it was more of a soup than a sauce and would never have stuck to the noodles. I suspect that this was because my cauliflower was smaller than the one from the recipe, which affected the solid-to-liquid ratio; I find that accurately recreating a dish can be difficult if the ingredients aren’t given in a weight or volume-based measure. I also had to use almond milk instead of heavy cream, which probably didn’t help, but there’s only 1/4 cup of that in there in any case. In the end I was able to save the sauce. First I whisked about 4 Tbsp of flour with some water to make a smooth paste, which I then whisked into the sauce. I simmered it all together for a while but I found that it wasn’t thickening fast enough, so I chucked it all into a microwave-safe casserole dish and microwaved it in three-minute increments (stirring after every three minutes) until it reached the desired consistency.

So would I make this recipe again? Probably, when my desire for a creamy alfredo-like sauce resurfaces. You definitely could taste the cauliflower in there, but that’s not necessarily a bad thing. I’d say it’s a reasonable replacement for a proper Alfredo, and it’s still a thousand times better than some of the canned versions that are available around here. Next time I’ll just adjust planned cooking times to accommodate having to thicken it.